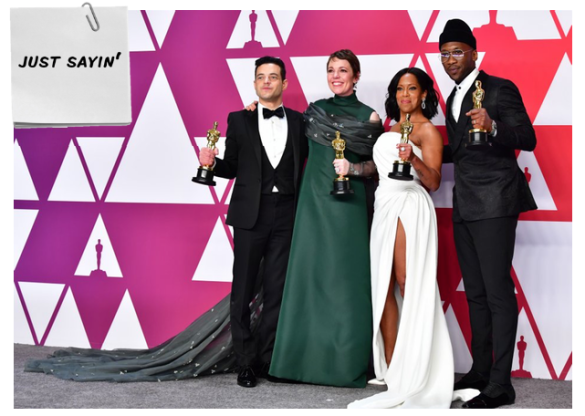 Oscars 2019 proved that you don’t need a host to produce a watchable awards show but you do need at least a handful charismatic stars, inspiring musical moments, unexpected wins and, of course, heartfelt speeches.

This year’s show featured all of the above and often did it quite well – sometimes a little too well.

There was something ultimately schizophrenic about the show, the choices and the moments the evening offered.  It was as if the members of the Academy were so unsure of what they truly loved this year in cinema that they decided to people please and pick almost everyone from as many films as it could. 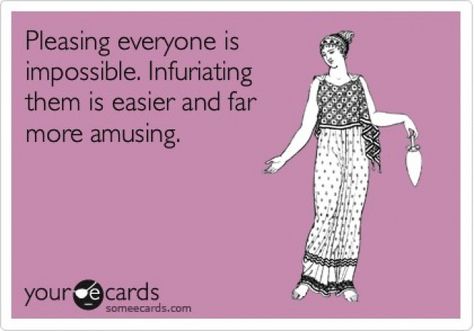 Green Book took home the top prize of best picture while its director, Peter Farrelly, was not even nominated in his category.  Roma won Alfonso Cuaron best director and cinematographer but his movie was passed over for best film.  (Note: It did win foreign film, meaning it’s only the best if…you don’t speak English?).

Spike Lee won his first competitive Oscar trophy ever for co-writing BlackKklansman but was passed over in the director category, as was his film for best picture. 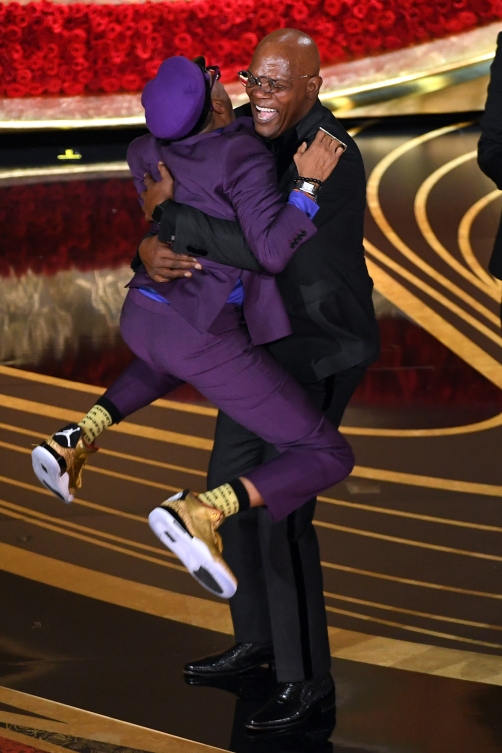 Glenn Close, who had already won almost everything during this awards season, became the first actress to be nominated SEVEN times for acting Oscars without a win.   Olivia Colman won best actress for The Favourite in a bit of an upset over the heavily favored Ms. Close (The Wife), while Rami Malek swept in as best actor winner for bringing beloved Queen front man Freddie Mercury back to life onscreen in Bohemian Rhapsody.

Though interestingly, neither of the two top actor winners appeared in the movies awarded either best film, director or screenplay, either original or adapted.

Of course, there is nothing wrong with spreading the wealth around.  But by the time Green Book was announced as best picture, veteran Oscar watchers couldn’t help but recall that time almost thirty years ago when another middle-of-the-road road movie about race, Driving Miss Daisy, won the best picture prize despite the Academy denying its director, Bruce Beresford, even a nomination in his category.

One supposes it is better for voters to widely disperse the joy rather than to ignore artists like Mr. Lee, whose more cutting edge film on race in 1989, Do The Right Thing, failed to gain either a best picture or director nomination and was subsequently overlooked in one of the few categories it was even nominated for – best original screenplay.  It took three decades but in 2019 the Academy managed to give Mr. Lee just a bit of his competitive due while still denying yet another of his masterpiece movies about race a win in favor of yet another rival film that chose the safer, more benign Driving Miss Daisy-ish route. 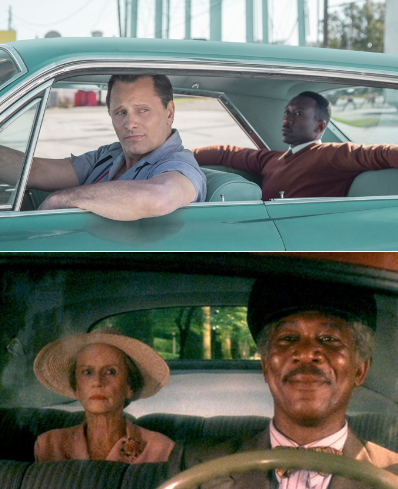 Look! They are in a car! How genius!

Whether that compromise was enough (Note: Um, no..) and others got too much (Note: Uh, hella yes..) is for each of us to say this week and then forever hold our pieces because that’s about how long the conversation will remain relevant to anyone given what’s in the zeitgeist these days.

What will hang around a bit longer is the memory of Melissa McCarthy entering the stage in a comic riff on The Favourite’s Queen dragging a train strewn with stuffed bunny rabbits, one of which somehow became situated on her hand and helped her to open an envelope.

Personally, I marveled at the age-defying beauty of actors like Angela Bassett and Paul Rudd, who will respectively turn 61 and 50 this year.  As Rosemary Woodhouse once said about her intimate evening with the Devil: IT CAN’T BE! Even better was the opening musical number where the remaining members of Queen, aided greatly by Adam Lambert as its fill-in front man, gave us a soaring song in tribute to Freddie Mercury, whose larger than life image looked on from above.

Equally riveting in a totally different way was when Lady Gaga and Bradley Cooper performed a stripped down version of their film’s mega-hit (and now Oscar winner) “Shallow” and managed to turn the Dolby Theatre stage into a master class pairing of artistry and intimacy. 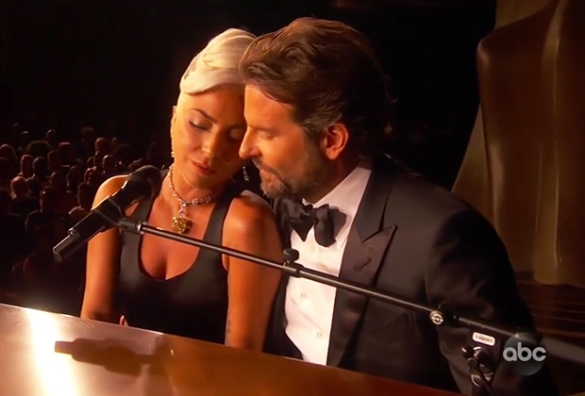 Um… his wife was 5ft away. #icant #THEHEAT

It was also fun to watch Tina Fey, Amy Poehler and Maya Rudolph goof it up in an elongated comic bit early on and actually prove you can still be fresh and funny on any awards stage.  Ditto Awkwafina and John Mulaney presenting best-animated short.

Was any of this indelibly memorable?  Not exactly, but it was fun and watchable. This may or may not translate into a ratings boost from the all-time low numbers of last year’s Oscar broadcast, which is pretty much all the Academy and network seems to care about at this point anyway.

Welp, there it is.

That and no doubt the fact that in giving Universal’s Green Book this year’s best picture Oscar over Netflix’s Roma, both could breathe a huge collective sigh of relief for denying the streaming giant any more of the industry gold it had already managed to swipe right out from under their collective noses. 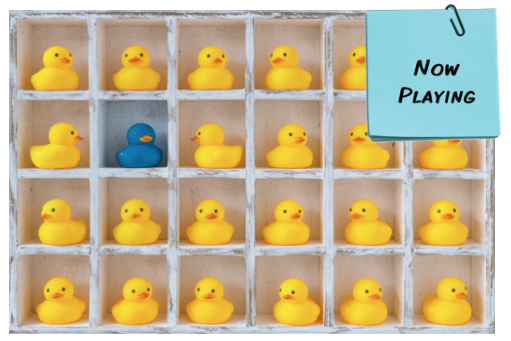 There is a moment in Spike Lee’s BlackkKlansman where a Jewish police detective, who has gone undercover as a KKK member, laments being put in this position by his Black counterpart.  It’s as if he’s forgotten (or never fully understood) the Ku Klux Klan were not only rabidly anti-Black segregationists but also virulently, and quite openly, anti-Semitic.

I’m Jewish, yes, but I wasn’t raised to be, says the character played by Adam Driver.  No Jewish rituals, no deep education about Jewish history, not even a bar mitzvah.  I was just another white kid. 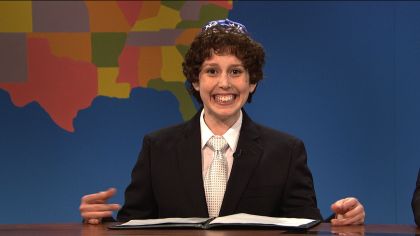 Did someone say bar mitzvah?

Suddenly, and much to his chagrin, he’d been OTHER-IZED.

Somehow a movie set in the early 1970s has managed to become the most timely filmic statement now out there about Trumpism.  Based on the 2014 memoir of real-life Black police officer Ron Stallowrth, it tells the story of how Ron made phone contact with the KKK, pretending to be an eager acolyte, and worked with his White counterpart, Flip Zimmerman, to pose as his physical self while in their presence. 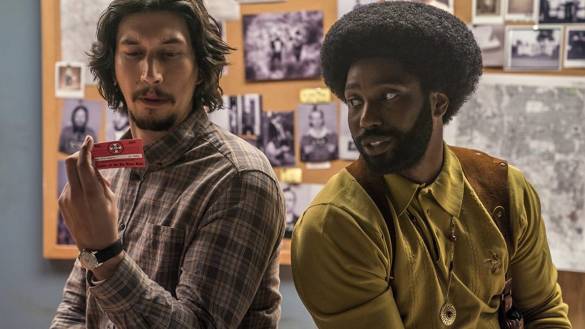 Part comedy, part drama and many parts many other things, it tells not only a racial story but speaks to the type of numbness all of us can fall into when traveling in circles where THEY are in the majority and WE are just the unwanted, or at least unfamiliar, INTERLOPERS.

To be OTHER-IZED is not a choice so much as it is a condition of where you live, where you travel and overall what you choose to do or need to do with your time.  A room full of jocks of many races can OTHER-IZE the lily Whitest of nerds just as a gaggle of snow White Hollywood BROs in power can OTHER-IZE any Brown-skinned woman of color – or any FEMALE of ANY color for that matter – who may be twice as smart and/or talented as any one of them.

Or all of them if you’re Oprah.

Gurl, you got that right. #badassbish

We are all nothing if not multi-tribal, depending on where we live, how much we make or what we do for a living.  The one tribe that trumped (Note: Ahem) all in the U.S. used to be American, but what being a REAL AMERICAN is seems to be quite up in the air these days.

In actuality, it seems to depend on which other TRIBE you belong to – or at least choose to identify with.  And with that comes a full handbook on who one needs to OTHER-IZE.

The fact is, it is no longer feasible to be a part of ANY TRIBE where SOMEONE is not generally THE OTHER.

Right, that’s what it is Gretchen. #dontotherizeme

We here in the Southern Californian #Resistance headquarters seriously distrust Trump voters of all stripes – and that’s the best case scenario of when we’re not foaming at the mouth angry at what we see as the nasty, racist…well, so many things I can no longer count… those voters have allowed.

On the other hand, Trump voters all over the country call us snowflakes, and at best see us as weak and anti-working class – or so I’m told from the few of them that I can still bear to talk to.  At their worst, well they prove the very points we’re trying to make, probably daily, about them, though I’m sure they’d put it quite differently and probably a lot less delicately if I gave them the chance.  Which I’m not any longer. 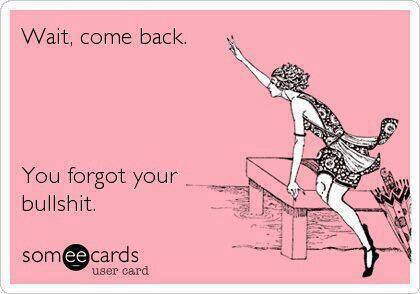 The funny part is there are Black, White, Jewish, Hispanic, LGBT, straight, poor AND rich members on BOTH SIDES.  In that sense, we’re all getting OTHER-IZED daily, and perhaps hourly, by somebody, and often in ways we don’t know about as we go about our day.

Of course, there are times when we do realize we are being cast as THE OTHER, and it is at these moments we are faced with THE CHOICE.

Ah yes, you do have any number of CHOICES when you realize you’re the only _________ in the room – or at least woefully outnumbered, discredited or discounted in that person or group’s mind/think about those in YOUR TRIBE, depending on your looks, skin color or affect.  They are:

On the other hand, it’s hard to deny you’re Black if you are very dark-skinned or pretend you’re not poor if you are three months late on the rent and about to be evicted.   Though even in the latter case of ZERO money, there’s always the chance that person is just being…irresponsible.  #AreYouWokeYet?

Sadly, most of us are not always up for a FIGHT, especially when we have the luxury to sit behind the tallest person in class and go unnoticed.  At least metaphorically. I, for one, have also spent time with one or two Republicans I admit to have gleefully watched squirm at Southern California dinner parties rather than blow their cover to the other guests in the room.  Sure, I told myself it wasn’t my place to say or do anything to help them but these days I realize my sadistic inner self rather enjoyed OTHER-IZING them far more, in secret hopes that this would somehow wake them to their senses.

Okay, perhaps the last example is a bit fanciful.  But it is possible to be into vintage and thrift stores and old school tech because you want to seem cool when you’re searching for work.  In the same way you can DENY you are RACIST by producing one of two Black co-workers or acquaintances of color even though there are dozens more who heard you use the N word when they were in the room.  And no, just because a videotape of that has yet to be produced doesn’t make it any less so.  Or mean that when it is it was somehow doctored. #ApprehensiveApprenticeTapePart1 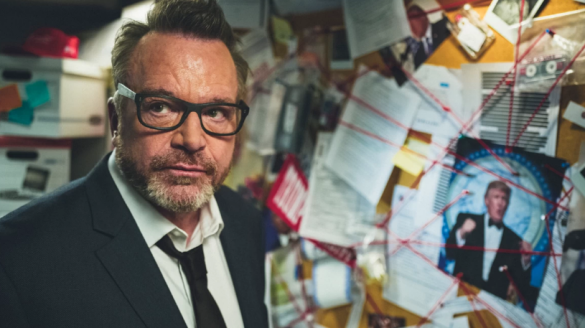 Yes, it’s easy to advise be yourself when YOU yourself don’t run the risk of being killed, permanently maimed or beaten up for doing just that.   But the way we’re going soon there will be nowhere for any of US to hide in certain circumstances. That is a condition that will be inevitable for pretty much ALL OF US at some point in our new GLOBAL REALITY.  #ThisISUs.

Meaning blending in, denying or hiding behind HATE simply won’t cut it anymore, if it ever did.  That is unless we want to live out the rest of our days as petulant junior high schoolers playing an eternal game of spin the bottle where we kiss the same people for all the wrong reasons in one unsatisfyingly long loop of endless hell.