A resolution is either an ending or a beginning.  The generally accepted idea of a situation being resolved would mean that it is brought to some sort of conclusion – at least in the eye of the resolver.  As with anything, of course, this depends on what side of the argument you’re on.

The political liberal in me refuses to believe the US presidential election of George W. Bush in 2000 was ever resolved despite the highest court in the US, the Supreme Court, having declared that the issue has, indeed, ended.   Uh, uh.  I don’t think so.  He wasn’t president for eight years.  Sorry.

As for the movies, for me there has never been a resolve (and never will be) to the Oscar race for best picture in 1994.  Oh sure, the Academy resolved that race years ago for itself and proclaimed that “Forrest Gump” was the winner.  But that’s simply impossible because that film annoyed me to no resolution; plus, it was also the year of “The Shawshank Redemption” (a perfect film), “Four Weddings and a Funeral,” “Bullets Over Broadway” and even “Pulp Fiction” – all movies that will endure waaay more favorably in my mind long after the aforementioned “best” picture.  Yes, even though that, uh, “best” picture was this week chosen as one of three films by the Library of Congress in 2011 to be preserved in PERPETUITY in our National Film Registry (along with “Silence of the Lambs” and Bambi” – last time you hear those three mentioned in one sentence) because of its outstanding artistic achievement.  B. F. D.  Something or someone willing itself or themselves into worldwide acclaim despite its obvious inferiority and unlikelihood (like in the plot of some Hollywood movie) is still faaaaar from resolved for me.  I mean, nothing like that could ever happen in real life.  Not really.

Life is not a box of chocolates.

The one resolution I can agree to in my current state of mind is the fact that 2011 is fading into distant memory and 2012 is now forging its way into the spotlight.  This transformation to center stage – sort of like Madonna slowly getting the torch pried out of her hand and passed to Lady Gaga or, well, cable TV consistently besting the networks for awards/prestige for dramatic television for shows like “Mad Men,” “Homeland” and Breaking Bad” despite the top four trying desperately to compete with them with new shows like “The Playboy Club,” “Pan Am” and “Charlie’s Angels” (Okay, I know I’m being unfair, but besides “The Good Wife,” which I’m a bit tired of everyone holding up as the reason why all network dramas are as good as those on cable, what are their big award-contenders?) means the start of something new. Like a new year.

The start of a new year also ushers in a long-standing tradition of making resolutions for the upcoming 12- month period that we will name 2012.  How did this tradition start?  You got me.  I scoured the internet for at least half an hour and asked numerous people I know (okay, four) about this and the best I can come up with is that this has been going on since ancient Roman times and that Kings and kingdoms have forever been thinking up stuff they will resolve to do.  Stuff that they want to achieve (like reversing the 1994 best picture winner or simply letting it go); or would like to not put off (like putting all my files in order and throwing out that second or third draft of a screenplay so old that its not on a computer disk, but one that I still, you know, might need); or even stuff they hope to achieve (aside from world peace, which is too lofty for one person to work on but certainly an admirable idea) or at least shoot for in the new year.

I actually like this last one – the one about jotting down some ideas of things you want to do.  Most writers I know, including myself, hate schedules and deadlines yet I will publicly admit here that having an idea of what you want to accomplish and giving yourself a time frame in which to achieve it, can do wonders for your output.  The trick to it is – and it’s tricky – to come up with a list that will take some work on your part, and yet, is remotely achievable – if you push yourself.

I’m not going to bore you with my short list.  I’m tempted but, well…okay…you twisted my arm.

Okay, I’ve listed my resolutions.  What are yours?  List them in the comments.

Yes, we all make (or have made) fun of the idiots who do make these lists and convince themselves that they will actually follow through with what they plan.  Of course, we are all idiots from time to time and even more often than that.  And — as they say on the wall of idiot clichés – or perhaps in one of the new movies on the National Film Registry – even a broken clock is right twice a day.

Peace and Love (cause I’m a sixties guy at heart).

Twas the night before Christmas and on the West Coast...

It’s that time of the year in the world of show biz
When it’s spooky and silent, even if you have kidz
Cause the town closes up and all calls go unanswered
Leaving new screeners and old TV shows to be cancelled.
Yes, just when you thought there was hope you’d break through
The red carpet rolls up and there’s nothing to do
Except to go home and spend time with your loved ones
Or open a bag of Top Ramen with no one.

You had hoped to buy presents but didn’t earn the money
Or you do have the cash, but you don’t have a honey
Or you’re doing quite well and you’re happy as pie
Except you can’t help but think that this dream soon will die
Cause HBO just nixed “Hung” and “Bored to Death,” too
They grew tired of cable sex and a stoned sleuth half-Jew?
But for Mike White’s new “Enlightened,” a big fat renewal?
Well, it’s a little new age-y and not very cruel
Perhaps that’s the secret, since Kim K’s divorce
Be a little more real, and a little less coarse
Wait, that doesn’t make sense, cause K’s still get big ratings
And Revenge is a hit, while Glee’s quickly abating.
American Horror’s taken Ryan’s attention (and I can’t say I blame him)
It’s got sex, blood, guts AND, no divine intervention
I’ll bet he goes home and eats more than Top Ramen
And Jessica’s Golden Globe nom surely must calm him. 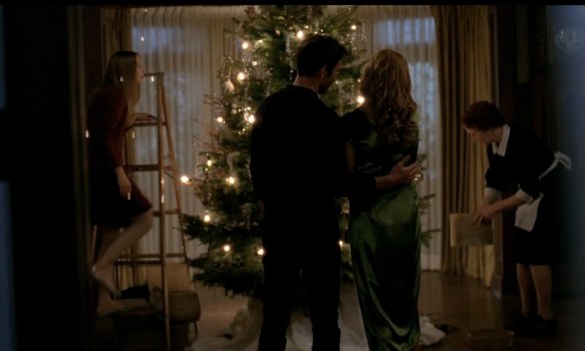 Not a creature was stirring

Hmm, let’s make a new plan, we can switch to the movies.
A lot more respect and a lot, lot less hooting
But did you see “Twilight,” or sit through “Transformers II?”
How about “The Green Lantern,”  or that “Scooby Doo 2?”
Well “Drive” was a hoot and this year Woody’s done well
At least it shows you can also be old and still very much sell
Or if you’re young there’s the Black List for scripter’s unknown
Even when they’re not made, you get deals and great phone
Go Gosling, Go Bullock; Coop, Pitt and Jolie, I can see you!
Go Cruise, Clooney and even Ms. Streep now feels brand new
Still it’s tough not to think of how much can go wrong,
Or pretend the list of disasters aren’t incredibly long

Ry in his cap

It’s so tiring thinking of ways uber-defeatist
Or just running in place while Sorkin’s sold his next fetus,
I did once read that selling your body could actually work
But three hour gym days drive everyone berserk.
Wait, what’s that I see – off there in the distance,
It’s a Hollywood God – no, it’s Ben Affleck.  Or Matt Damon?
I can’t see their faces;  cause it’s her, you damn fool.
She’s Marilyn Monroe and she’s sitting right by a pool!

No, it’s not Michelle Williams, though she’d actually do
Could you imagine that “Dawson’s Creek” girl’d one day make you drool?
Ill bet that Michelle never thought that would happen
How could she when even Van Der Beek didn’t pay attention?
Look Marilyn’s nodding, I think it’s what we just stated
Or is she blowing me a kiss, and my sadness has just abated
No she meant what she said and she said what she meant
She was looking at us, not that clone of Clark Kent
The smartest of people is what I think are cool
And the ones that I met in that hip acting school
Or the grips on the crew who are nice and just real
Not the ones who just used me while copping a feel
Wait, are you a mirage that everyone sees
Hey Mar, I’m DeNiro, “you talkin’ to me?”
You know that I am, and now try to break free
And don’t fret like the rest of the fish in this sea.
A real life is precious as precious can be
Like Taylor’s Krup Diamond which, by the way, just sold to me
The mistake that you make is you try to fit in
When the ways you are different is what gives you the win
Your smile and your brain and your sweet disposition
And the art that you bring to each difficult mission.
I made my mistakes but at least they were mine
Now go and make yours cause to me, you’re divine
Woah, I think she’s just vanished, along with the pool
And it had to be her cause I’m feeling so cool
And as I look up in the sky on this bright L.A. night
Where once there were not any stars in my sight
There is Marilyn saying with everything that she feels
Believe in your talent,  you are the REAL DEAL.