Think of watching the Oscars like a booty call.  Or the hookup you reluctantly fall back on once a year.

Neither may be the best use of your time but each offers a chance for something mindless, seductive, exciting and fabulous, perhaps all at once.

Be nice… after all, Green Book can’t win again.

Never mind there’s a 98.6% chance that won’t happen.  We all live for that elusive 1 (plus) percent.  And isn’t that what the Oscars are really about?

So, don’t pretend you won’t watch, hate watch or go to some event where you sort of watch or shhhh shhhh everyone so you can watch.  You will and so will we – live and on Twitter and via Facebook.  In the meantime, here are five things to watch out for while you’re watching this year’s Academy Awards:

1- THE TAMING OF NETFLIX – For the first time in Oscars’ history it’s not a film studio leading the pack for the most nominations but a….streaming service.  That would be Netflix with 24 nominations – 10 for The Irishman, 6 for Marriage Story, 3 for Two Popes, 2 for best-animated feature (Klaus and I Lost My Body) and 1 for best documentary short (Life Overtakes Me).

It’s not that Netflix will get entirely shut out of the game – after all, money from prestige films is really hard to come by these days.  It’s more that the streamers need to know their place.  So look all three of Netflix’s dramatic feature nominees to go home empty handed in every category with the exception of Laura Dern’s win for best supporting actress in Marriage Story.  A second award will likely be in the animated feature category, probably for Klaus.  But that should be all.

GO GET YA OSCAR, DERNZ!

2-  BILLIE EILISH – She just co-wrote and performed the theme for the upcoming James Bond film and, as such, will likely be an Oscar nominee next year.  But this year the iconoclastic 18-year old will be performing…..something.

My guess is that it’s either an imaginative background vocal to the In Memoriam segment or some weird preview of the Bond song.

Or, well…okay, the truth is I have no idea.  But I’ll bet she wears sparkly pajamas while she’s doing it and they will be the top online seller of Oscar knock off outfits the very next day. 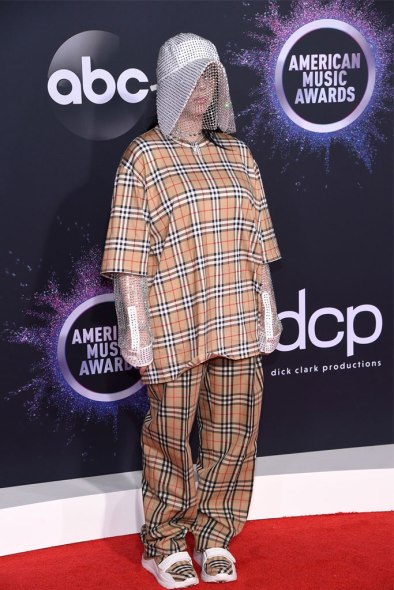 I want to understand this… I think?

3- PARASITE vs. 1917 – Since the four acting prize winners are pretty much set (Note: Joaquin Phoenix (Joker), Renne Zellweger (Judy), Brad Pitt (Once Upon A Time…In Hollywood) and Laura Dern (Marriage Story)) that leaves best picture and director to provide the suspense.

What seems inevitable is a split between the 1917 and Parasite with our money on Sam Mendes as best director for 1917 and Parasite taking home the big best picture prize.  Why?  Because everyone admires 1917 as opposed to loving it and no film speaks to this moment in time better than Parasite.

4– BRAD PITT’S STANDING OVATION AND ACCEPTANCE SPEECH – He’s the only one in his category to have never won an acting Oscar.  He was great in Once Upon A Time.  He’ a 56 year old shirtless wonder.  He’s made fun of himself in truly hilarious, self-effacing speeches all throughout awards season and everyone wants to see/hear what comes next.  (Note:  Ahhhhh, no, it won’t be Jen….Or will it?).

5- POLITICS DRINKING GAME – The main attraction.  You likely won’t hear the word Trump mentioned at all during the show. But throw one back every time you do hear the words peace, equality, global warming, justice, America or any variation of the phrase: lawless White House Orange Pumpkin Monster.

It will ensure the best Oscar experience you’ve ever had and you won’t remember a thing in the morning.