Elizabeth Warren can’t win! Her voice is shrill and Republicans hate her!

Oh, and don’t get me started on Bernie Sanders! We call him the liberal Trump.  Did you know he wants to let rapists, not to mention the Boston Marathon bomber, vote?? AND he’s a socialist!  I don’t know if even I could vote for that!

And did you know Amy Klobuchar is so nasty to her staff that when one of them forgot to get her a fork for her salad she pulled out her comb and made them sit there as she scooped her salad onto it?  Yes, and then, when she was done, barked, “Clean it!” right at them.  She’s not a president, she’s a harridan! 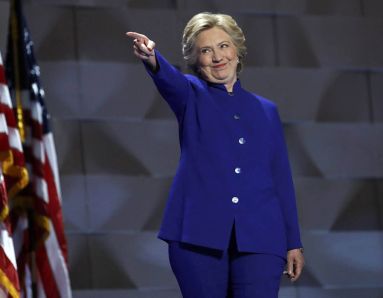 But Kamala Harris.  As if someone from near San Francisco is ever gonna be president.  Plus she’s Black AND Indian AND married to a white Jewish guy!  Grow the f up!  Do you even know what country you’re living in these days???  Donald Trump is the president!!!!

I am sooo tired of all of this and the election is 18 months away.  Heck, even the first Democratic primary is not until Feb. 3 in Iowa.

Who will help me get through this???

Or course the bigger question is WHO will help US?

Yes, I know only we can help ourselves.  We are the change we’ve been waiting for.   I get it.  I’ve been to therapy.  Both the personal kind and the Obama kind.

Still, the fact remains…I can’t.  I’m tired, I’m cranky and I’m pissed off with people who share most of my political views.  And I refuse to watch a THREE-HOUR Avengers movie.  One was enough for me and I can’t even recall which one I did see.

Why are we paying to watch super villains and superheroes when we have so many of both in Washington, D.C. and on cable news daily??? 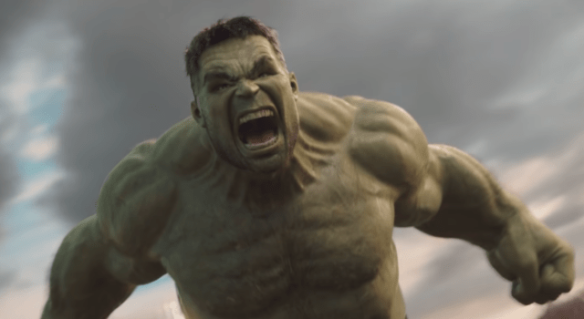 OK fine… I do find the Hulk relatable.

I overheard a bunch of film students talking in rapt excitement about the new Star Wars movie the other day and had an acid flashback moment to 1980 at a Fox screening room when I was watching one of the first pre-release press showings of The Empire Strikes Back.

As much as people think this is an unusual time – and in many ways it is – in a lot of other ways it’s no different than so many of the swings and changes we’ve endured as a country all through the 20th and 21st centuries that I’ve lived through thus far.

I can recall watching Bobby Kennedy and Martin Luther King assassinated on TV, not to mention Jack Ruby shooting JFK’s would-be assassin live on TV in front of millions of people – a clip that lived on a lot more than 40 years later.  Probably in perpetuity of the world as we know (or don’t know) it.

.. and again thanks to shows like Mad Men #imissDonDraper

I also remember as a teenager the police shooting college protestors just a few years older than me in Kent State Ohio.  All they were doing were being teenagers, trying to end a needless war in which they and their loved ones could have been killed in, and, well, throwing a few rocks when the National Guards released tear gas on them. But then the National Guard shot 67 rounds of bullets in 13 seconds into the crowd.   Four students who were NOT EVEN PROTESTING, just observing, were killed.

You’d think we would have gotten the gun and the law enforcement thing under control by now.  Of course, we haven’t.

In case you’re not feeling outraged yet…

Nevertheless, we have survived.  Decades of intolerance turning into more tolerance and then acceptance by many more than some in marginalized communities.  Though not by others.  We even have more laws than ever to back them up, though not enough and even those aren’t always enforced.

Point being, things were REALLY bad then.  George Wallace, an avowed racist, ran for president and got 13% of the vote.  And then, of course, he too was shot.  And paralyzed.  What goes around comes around, right???

I’ll keep telling myself that, Chairy

Well, that’s what we’re hoping for right now, isn’t it?  That somehow the haters and the shooters will get theirs because we need CHANGE?  And right NOW!  Because we’ve been complacent.  We need to UPEND EVERYTHING because, well, things have never been this bad.

I’ve actually said this myself. 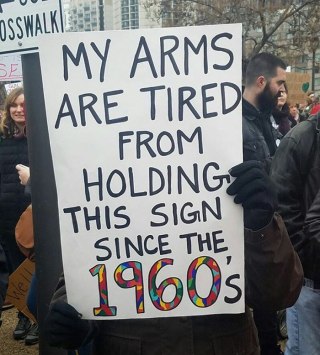 And then there’s this…

Yet it occurred to me, watching coverage of the latest shooting at a house of worship – this time an Orthodox Jewish synagogue in California where a crazed shooter killed one person and wounded several others – that radicalism has never quite worked in the U.S.

We’re more of a gradual change environment, brought on by individuals and groups proposing radical change.  You need radical thinking to move the needle.  But to lead, you need bold measures and smart, well-researched, practical plans that can be willfully executed through the actions of a President and Congress elected by we, the people.

For me this means we need to stop being hysterical.  Accusatory.  And refrain from eating our own.  You all know what I mean.  No one who has lived a life of any age is perfect.  Certainly no one who has done anything in public service.  Especially no one anywhere near 1600 Pennsylvania Ave. at the moment.  Especially the sloth at the top of the sloths.

OK maybe not sloths. Look how cute this one is! #justiceforsloths

This is simply a call to calm down and realize that when we decide whom to nominate to run against you know who for president there is no recipe for the perfect chocolate cake.  Or even a vanilla one.  When someone is kind enough to ask you what you want them to bake for your birthday celebration you weigh all the factors (Note: Sometimes literally and sometimes not) and pick out the one you have a hankering for at the time.

But seldom do you order the cake this much in advance.  Not even a wedding cake.

Oh, and if you’re going to a party where the birthday boy or girl chooses chocolate you don’t sit in the corner, refuse to eat the cake at all or bitch and moan that they didn’t serve the Carrot one that you would have preferred.    And for the record, I hate carrot cake.

Though I have managed to down it at a party or two in order to celebrate someone or something that I cared about.

The Beatles – “We Can Work It Out”