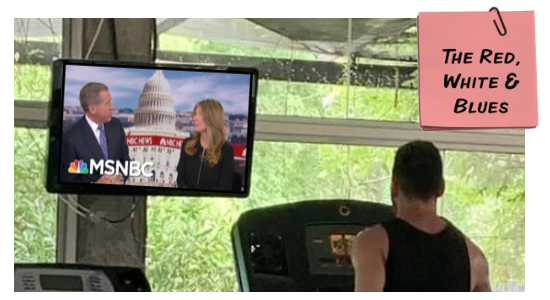 You know how you slow down when you see an accident on a highway even though you don’t want to?  Well, that’s how it feels watching The Impeachment Trial of Donald Trump.

Still, I have to specifically hand it to my cable network of choice, MSNBC.  They’ve brought it.  The last thing I wanted to do this week was to hear the guy’s name, see the stuff that passes on his head for hair or hear about anything he’s ever done/does in the past, present or foreseeable future. 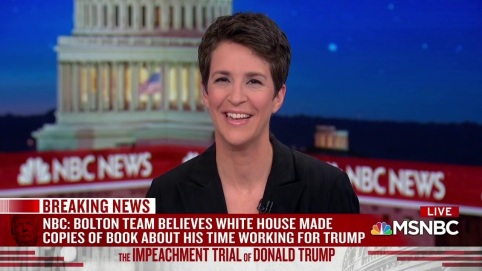 We bow down to the national treasure that is Rachel Maddow

Still, I couldn’t turn away.  Not for barely a second.  I even found the ONLY treadmill at the gym with on Friday afternoon that had a small screen turned to guess what…MSNBC!…. during THE key climactic moments late Friday afternoon.

It was meant to be.

Or so I reasoned to myself when I got off the machine I was on and hiked three rows down to see more of what I’d been watching since 8am that morning and every morning for the last seemingly 52 days.  Only this time there were merely images with subtitles.   NO. SOUND.

Oh yeah.  I couldn’t figure out how to plug my headphones into the thing.  But even that was okay.  The subtitles were being done on the fly and I got most of the abbreviations.  In fact, it became fun to figure out which commentators were which WITHOUT THEIR words ALWAYS being identified.

Suddenly, I was running at record speeds, in elevations that I hadn’t been in months, trying to play a NEW guessing game.

Oh, yes, that sounds EXACTLY like what Nicolle Wallace would say because she knows the inner workings of the White House!

Sure, that’s former Senator Claire McCaskill’s incisive commentary.  It’s not only smart but a bit snide. 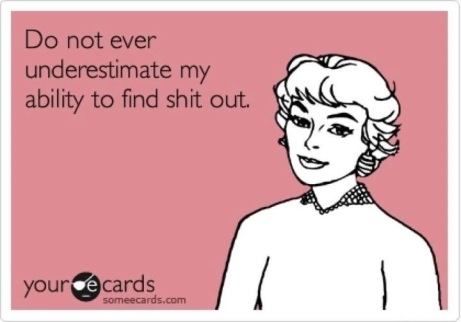 And wait, she’s actually…texting with members of the Senate in real time??? I was right, I gleefully proclaimed to myself as I bobbled my water bottle and it sprayed all over my gray Lululemon workout shirt from six years ago that somehow is still holding up.

OMG, it’s like having a spy behind enemy lines, ready to dish to your side in a down and dirty way.  Yay Claire!!!

Then, trying to figure out who’s talking to whom on the crowded Senate floor from far away, I suddenly hear Claire excitedly saying: That’s Lamar’s (Sen. Alexander (R-TN) bald spot…

…as we were waiting to determine whether he was going to cast the third possibly dissenting Republican YAY vote to finally HEAR a few witnesses (or even one) on the issue of impeachment in the Senate trial (Note: He didn’t).

Forget that the NY Times had just reported former Trump advisor John Bolton’s upcoming March book has him proclaiming in print that Trump did indeed hold up gazillions of dollars in foreign aid to Ukraine unless the country investigated Hunter Biden and his dad Joe Biden, Trump’s chief rival for the presidency at the time.

I was almost equally as riled up that Claire seemed to be on the verge of some sort of hirsute-ish scoop!

Of course, once reality began to kick in I sort of began to crash.

But some moments later, just when the hope for any live witnesses at this quickly becoming kangaroo court was lost, the powers that be at my channel cut to Democratic Senate Minority Leader Chuck Schumer live as he gave a short statement proclaiming that the Senate voting not allow new witnesses or documents at this trial was a…PERFITY????????????????

What the f-k does that mean????  Suddenly, I felt so let down by my friends on the panel who only moments before were seemingly my only friends in the world because they were the only ones still with me through all this who never seemed to mind me ranting and raving (Note: Forget they couldn’t hear me) cause they were, too.

Then, Brian Williams, like the God he is, jumped in and quipped re: Schumer’s perfidy:

Hey, I bet he wishes he could take that word back!

After which Claire and Nicolle laughed.  And laughed.  AND LAUGHED!!!

I felt even better when, I think, Chris Matthews noted that it was Harry Truman who always recommended you don’t use 10-dollar words but nickel words if you want to really get people to listen to you.

Sure, I’m mangling the quote a little but that was the gist of it since I couldn’t find the actual one.  Though I did find out the definition of perfidy.

deceitfulness; untrustworthiness.”it was an example of his perfidy”

Since this whole week was all about perfidies I now very much admired Schumer for bringing it up in the first place. 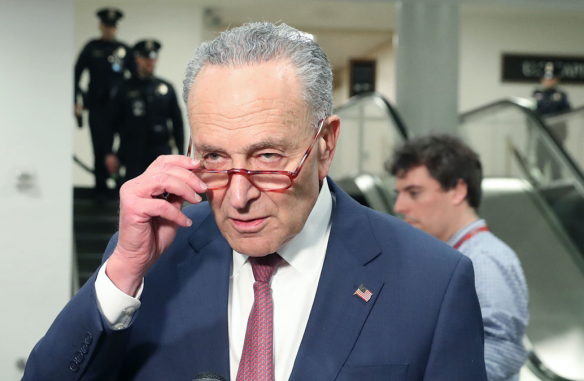 Every time he uses a fancy word, the glasses get lower

Until Nicolle (or was it Brian or Chris? – I’m not sure who it was at this point) announced another revelation from the Bolton book just unearthed by the NY Times.

Well, I thought Nicole was going to lose it along with me. 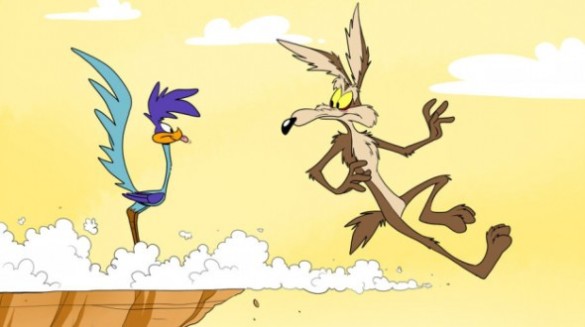 Luckily, I was off the treadmill by then and watching this via a flat screen TV I found in the weight room that happened to also be tuned to her.

Lest you think I go to one of those blue state, elite snowflake gyms, know that’s not quite true.  It’s a 24-Hour Fitness and it costs me $120 per year.

And occasionally some screens are tuned to Fox.  Until I complained about it and never saw that channel on in MY GYM again.

At least not on my watch.