When Taylor Swift gave a surprise performance of her new anti-hate song, You Need to Calm Down, in celebration of the 50th anniversary of the modern LGTBTQ movement at the very place where it started – NYC’s Stonewall Inn – it made an impact.

After all, the 29 year-old singer/songwriter is one of the best-selling recording artists of all-time with over 50 million album sales and 150 million in single digital downloads.  She’s won 10 Grammys, was included in Rolling Stone’s 100 Greatest Songwriters back in 2015 and has appeared three times in Time’s 100 most influential people, including 2019.

Whether you are fan, frenemy, enemy or simply indifferent, it is undeniable that once Tay-Tay sets her sights on, or music to, a subject she carries an indefinable weight towards changing hearts and, more importantly, minds on said subject.

As a gay man of a certain age I do not take any support for granted, especially hers, and finally understand that each small and large gesture are essential building blocks forward.

At this point it might be worth remembering that it was on the day Judy Garland died that a group of trans people, gay men and drag queens stood up to police harassment en masse at the Stonewall Inn and birthed the modern gay liberation movement.

The fact that they rioted in the streets of Greenwich Village for several days, refusing to be targeted where they lived, did not happen just because a gay icon was gone, as the history books like to simplify.

However, it would not be overreach to write that when that final straw dropped on that specific day, a bunch of us were extremely pissed off, much more so than usual.  Just like you don’t throw a lit match onto a gas station or sass your Mom and Dad just after they’ve gotten home from a double shift at work. There are limits to what any of us will tolerate on a very bad day.

Even Joan has limits #nowirehangers

You can’t blame it on the sass or the match or the day or the shift.   It takes the combination of some or all of those elements (and more) to fuel the uncontrollable fire that was sure to come once all the kindling fell into place in exactly the right (or wrong) way.

It was in thinking about all of the above that it became undeniable that a week had just passed where all three of the new mainstream films and TV series I had just consumed for the first time centered specifically on members of the LGBTQ community.  This would have been unthinkable just two or three decades ago not because my tastes had changed but due to the fact that no one was making this much openly gay content back then for mass consumption.

Not even Charles Nelson Reilly was technically “out”

There was Halston, a feature length documentary on the gay designer of Jackie Kennedy’s pillbox hat, Liza Minnelli’s sparkly stage outfits and just about some part of every trendy female fashionista’s wardrobe back in the 1970s.

Then scrolling on Netflix was Larger Than Life: The Kevyn Aucoin Story.  This was a hard look at the celebratory life and tragic death of young gay man credited as the greatest makeup artist who ever lived.  A guy who worked with every female supermodel of his era, including Cindy Crawford, Naomi Campbell and Linda Evangelista, and then segued to work with the likes of Cher, Tina Turner, Barbra Streisand, Gwyneth Paltrow and Andie McDowell. 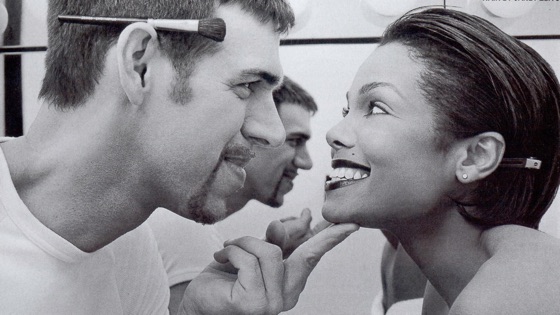 The master at work

dedicating his own time and money to mentor other young, forgotten gay kids, many of whom came from the same small homophobic home towns he himself had grown up in.

Watching his adopted father’s account of how the young Kevin had to drop out of high school at the age of 15 after several of the school bullies tried to run him down with their truck was enough to make any viewer question if anything has really changed at all.

Of course, this would be foolish thinking since his very own path to international fame as a proudly out gay man occurred years after the Stonewall Riots and the rise of a very un-publicly gay designer like Halston.

It is on the wings of countless real life people that Kevin was able to rise just a little bit more and the memorable gay characters of contemporary fiction emerge.  That is why watching Netflix’s just released 10-part limited streaming series, Tales of the City, based on Armistead Maupin’s best-selling books of 1970s, 80s and beyond San Francisco, seems a perfect cultural bridge to a 2019 public, yet now somehow almost routine, LGBTQ ally like Taylor Swift.I can recall devouring those Tales novels when I first came out because it was the first time I saw the gay and straight worlds melded together into the one more integrated, albeit messier, world that I lived in.

Sure, it was a somewhat idealized world but it spoke to my reality closer than anything I had come across up to that point, straight or gay.  Good as the early PBS miniseries (based on the first two books) was back in the early 1990s I can recall how disappointing it felt to have it viewed as both exotic and controversial when it was first broadcast during the AIDS era.   So much so that the PBS network declined to do any more movies/shows based on the next books, which were finally produced by Showtime but gained far less attention.

For those of us still around, and for so many others, it is therefore a partial triumph of both endurance and history that the gay-themed issues tackled in the latest Tales on Netflix are today barely controversial – only merely reflective of where the world is now.  Far more potent is how the middle-aged (Note: ahem) characters of my generation co-exist with the younger out(er) and proud(er) generation after them and how they all grapple with the full history of those left from the still older generation that came before either of them saw the light of day.

It is in this more full depiction of the many inroads and detours taken in the full path to get here that these newest Tales really soars.  This is done through expert performances from the likes of Olympia Dukakis, Laura Linney and Ellen Page as trans, straight and gay/bisexual characters, respectively, of different ages whose many stylized stories not only naturally but casually intersect with a core truth of not only how it was but how we would want it to be.  Perhaps, in some ways, how it now is for all of us.  Or, well, more of us.

This new Tales miniseries is memory piece of today that is built on the past but exists clearly in the present as it consistently looks towards the future.  It is not unlike what Taylor Swift does when she comes fully out as a straight LGBTQ ally in 2019 and uses her celebrity and talents to boldly admonish all current and future homophobes in a fun but clearly commercial pop song pointedly entitled You Better Calm Down.

Taylor Swift – “You Need to Calm Down”