It’s been said many times that everyone has a price.

What this means is that people will do anything if they are paid enough money or given what they want.

So the question we all need to seriously ask ourselves during these very turbulent times is:

Is it safety from real or imagined enemies, foreign or domestic?

That is to say, doing whatever it takes to bar morally unknowable immigrants (Note: nee…all of them?) from entering our country? Or is it prohibiting any morally questionable person in support of such a policy from dining in your restaurant, not to mention, continuing as president? 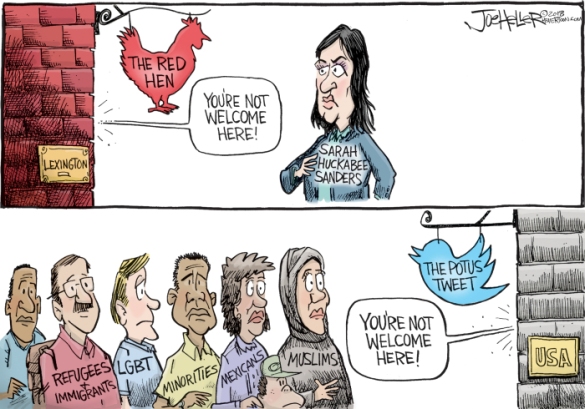 Is it about ensuring our country thrives financially, as well as ethically?

That is to say, making sure you have a president whose first priority is cutting taxes, creating old-fashioned jobs for the long ignored and appointing Supreme Court justices who will once it again make it difficult or illegal for women to get an abortion? Or is it ceasing communication with family and now former friends who believe in all of the above, while screaming at the top of your lungs in their faces, or from the rooftops or on our airwaves, to counter their selling out our most precious American ideals of freedom, equality and democracy for all?

You see where this is going. I had planned on continuing but the list and the metaphors could be – and are – endless as we approach July 4, 2018 – the 242nd anniversary of American independence.

Several days ago I watched What Price Hollywood a 1932 film directed by George Cukor about a spunky waitress who serves drinks to a charming, drunken Hollywood director that gives her a bit part in his movie, guides her to stardom and then dissipates into a state of alcoholic disrepair as her life blossoms.

The plot has since been appropriated by numerous movies, including the many versions of A Star Is Born (Note: The new Bradley Cooper/Lady Gaga one opens Oct. 5, and yes, I’m counting the days). Still, this does not mean it is any less ironic or timely.

Click for the OFFICIAL countdown (to the minute) #really #REALLY

There is no reality where you can get everything you want without it costing you something. It wasn’t the waitress’ fault the director became a hopeless alcoholic and ruined his life but because he was such a great mentor and friend it breaks her heart. That is the way the drama works because that is the way the world is – we achieve things and the norms and/or people we counted on and loved quite suddenly, at least to us, fall by the wayside.

A more contemporary comparison might be Indecent Proposal, a 1993 film where billionaire Robert Redford offers happily married Demi Moore a flat $1,000,000 to spend the night with him, no strings attached. After discussing it with her high school sweetheart husband, the financially strapped Woody Harrelson, and reassuring him of their forever love, the couple agrees to the Faustian bargain and… well… it goes as Faustian bargains go if not for test marketing and a somewhat tacked on Hollywood ending.

Girl how did you think this was going to pan out? #dowagergetsreal

It certainly seems like US Supreme Court Justice Anthony Kennedy, 81, has the right to retire from the bench anytime he wants. Yet when I read this week that he was not so subtly reassured of his legacy beforehand by the White House, and that his eldest son worked for years with Trump on real estate deals at Deutsche Bank, the institution that loaned Trump a BILLION dollars, I couldn’t help but cynically and rhetorically ask the justice, and myself, – what price?

Of course I will never know if a price was exacted or if this justice – the Republican who was actually the swing vote in making gay marriage the law of the land – was swayed by any of it, or by them.

So it’s instead easier for me to stew over the millions of Americans (Note: And perhaps a handful of Russian bots) who voted for and still support a president who consistently calls the press the enemy of the American people or very bad people on the very day that five journalists were gunned down in their Maryland newsroom by a crazed shooter with a vendetta against their paper. Did Trump’s words contribute to egging the guy on in that particular moment? Again, we’ll never know. But for any of his supporters who still get joy from and continue to revel in how he’s characterized one of the foundations of our democracy – the free press – again I ask – what price?

And then – well, there are the immigrant kids in those cages. Mostly brown. Many fleeing violence in their home country – the way my grandparents and friends’ relatives did when they escaped the Nazis and came here in the 1930s and early forties. Or the way my internist’s family did when he was smuggled out of war torn southeast Asia in the 1970s. Or how my dental hygienist managed it when her family ran for their lives from Iran in the 1980s.

None of them were forcibly separated from their parents by the US government when they arrived at our borders seeking asylum (Note: The latter a legal right of ANYONE arriving at our shores. Asylum, that is).

So for those currently chuckling with satisfaction at or apoplectically angered by those of us marching in the streets who are outraged that non-English speaking three year olds are being forced to appear ALONE in court at a hearing where they are responsible for telling their own immigration story THEMSELVES before an adult in a big BLACK ROBE who towers above them, I ask – to every last one – again – what price?

And to consider if what they’re losing is worth what they’re getting in return. Financially, morally or, really, even in practical terms.

Broadway United – “We Are The World”