Think of it as a concentric circle that gets smaller and smaller until there’s nothing left. Like the gyroscopes I used to look at when I was a kid. Or the background logo to this tackily addictive sci-fi adventure series on ABC I watched in the sixties – Time Tunnel.

Exhibit A (or the inner workings of my mind)

That’s the number of individuals who know the real facts of what’s going on in the head of the man who resides in the White House’s Oval Office these days.

Unless, of course, you count the number of Russians listening in through the bugs they likely got to plant several days ago when they, and not the American press, were invited to the inner sanctum for the latest in an endless stream of propagandized photo ops. 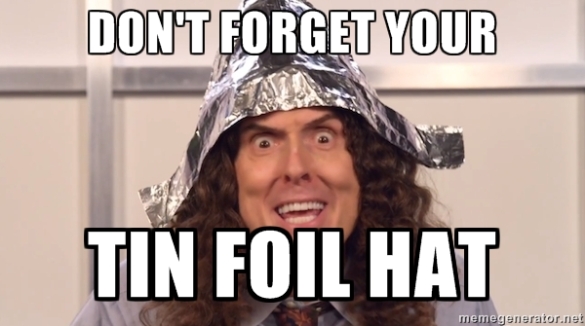 Did I take it too far?

An angry, ranting, vengeful POTUS, who by all accounts spends more time on his Twitter rants than reading policy books – or on policy in general – and certainly on any type of books in general, which he proudly claims he doesn’t need or have any desire to read – is simultaneously entertaining and scary.

Much like a seminal episode of Big Brother or The Bachelorette. Or a bag of potato chips chased with a super-sized Snickers bar and a Big Gulp.

But are any of the above good for you? Well, one supposes that’s a matter of opinion. Certainly, we can agree it can be fun to indulge.  So perhaps the more benign question to ask is —

Just how entertained do we want to be?

I’m as guilty as everyone. The mere 10-second snippet of “Spicey” being wheel-ied down 58th St. in New York City on his Segway-fueled podium spewing insults made me giggle with delight on a Friday morning. And that was a day and a half before his actual appearance on SNL this week where I could be seen in my living room squealing with delight among friends and family. But really, is it funny???

Of course it is. And isn’t.

Well for me, it’s certainly a lot more entertaining than watching the real thing. Who said it – imitation is the sincerest form of flattery? Let’s correct that. Imitation is infinitely more preferable to the real thing because it’s actually bearable – and anything but flattering.

I am quite aware that the way I laugh at the ridiculousness of the Spicey parody a la Melissa McCarthy and Alec Baldwin’s orange drenched, open mouthed and thick lipped Electoral POTUS, is probably akin to exactly the opposite of what his base supporters scream at with delight. In my mind, that would be at the very least the apoplectic reaction citizens like me have to the many, many regal pronouncements (Note: What else can you call them but royal edicts?) the real 2017 POTUS (Note: No, I DON’T mean Hillary) makes from the actual presidential and/or press podium.

As a very active President with lots of things happening, it is not possible for my surrogates to stand at podium with perfect accuracy!….

Me: Seriously??? So in other words, he lies any time he wants?

On Comey’s firing to Lester Holt on NBC:

He (Comey’s) a showboat. He’s a grandstander…In fact, when I decided to just do it, I said to myself, I said, you know, this Russia thing with Trump and Russia is a made-up story…

ME: Showboat??? Is this the 1927 musical or the 1936 film from MGM? What year does this moron live in? Not to mention, he’s firing the guy who’s investigating him!!! How can anyone look at this and think this is okay?

We don’t have to have press conferences…We just don’t have them, unless I have them every two weeks and I do them myself…I think it’s a good idea…you have a level of hostility that’s incredible and it’s very unfair.

ME: What is he, a f-ckin despot?? What is this, third grade? Not fair???? We don’t have Royalty in this country. He’s not a King!! Unless he’s the Madness of King George. We operate on a free press here. Well, he’ll see!! We’ll go around him. And we’ll f-ckin BRING HIM DOWN!!!! There’s a price to pay for not reading the Constitution. Or not even having one of your buddies from the Gulag explain it to you! You orange, lying road kill sack of crap!!!

Just writing this has my heart palpitating. And I don’t know which was worse – spouting my own truths or inventing the reaction from the other side. Certainly, I was equally at ease doing and imagining both. They’ve how long and often they’ve been heard – with no end in sight. He’s been campaigning for almost two years and is still going.  And he’s actually been in office only three and a half months.   Impeachment notwithstanding, how many more do we have do go?

There’s not much I know these days but one thing I’ve always been sure of is that humor is as great a release as the truth – which any number of wise people before me have argued …will set you free.