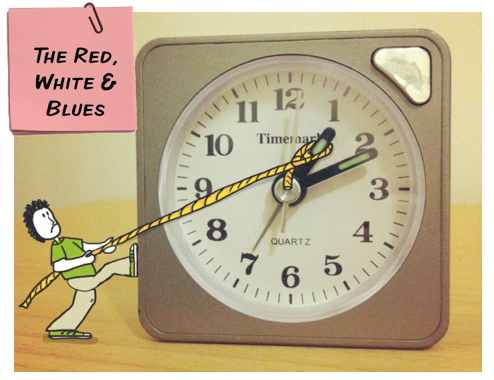 John Lewis has been a congressman for almost 30 years but is still best known to most Americans as one of the young protégés of slain civil rights leader Dr. Martin Luther King, Jr. In that realm, he is also renowned as the young Black man whose skull was brutally fractured by nightstick-wielding Alabama state troopers during the 1965 March on Selma when he, Dr. King, and hundreds of others merely decided to walk across the Edmund Pettus Bridge in non-violent demonstration in order to integrate the South. 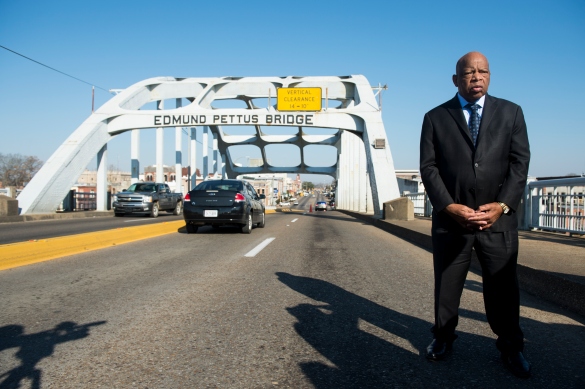 Now 76-years old and bald, one entire side of Rep. Lewis’ head still very clearly bears the bold, visible scars of that fateful day. So as he encouraged demonstrators to never give up on their goals it is also unsurprising that a veteran lawmaker like himself would admonish them to also not give in to their anger over 200 mass shootings since 2006 (the latest of which was responsible for a record body count of 49 inside an Orlando gay nightclub) despite absolutely ZERO modifications of laws that allowed those gunmen to purchase their often quite sophisticated military grade weapons.

The way of peace is the way of love, Rep. Lewis shouted out towards the crowd as he went on to further share with them what he said Dr. King related to him all of those decades ago.

Hate is too heavy a burden to bear, so we need to lay it down – it is better to love.

And to even that he then added this 21st century addendum.

So with all of you working together — we can turn our nation around. It doesn’t matter if you’re Black or White, Latino American, Asian American, Native American, Straight or Gay – we are all Americans. 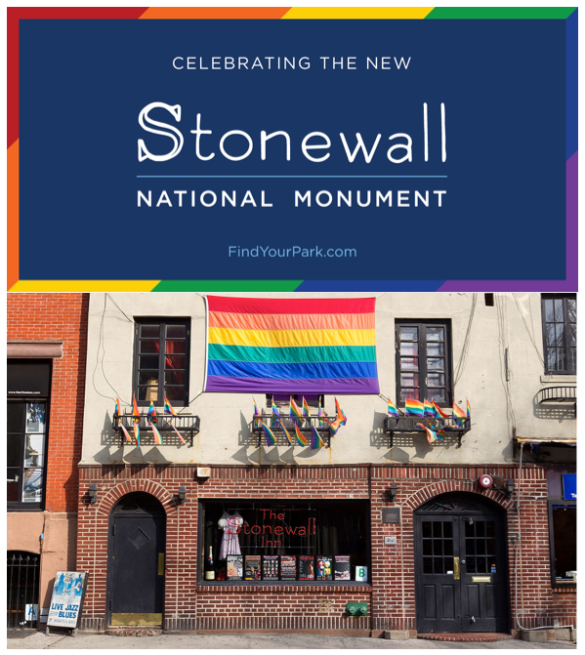 My head is still spinning over this….

I am hesitant to say a few unexpected tears welled in my eyes as Rep. Lewis spoke. As a gay guy of a certain age I have not yet grown used to national leaders openly including us in the multi-layered cloth of identities in this country. Yeah, I know it’s been at least a couple of years but I’m not sure you ever relax about this sort of thing when more of your life has been spent battling inequality than basking in the rewards of the opposite. In this way, I can only begin to imagine how he must feel as the purveyor of this message after what he has managed to live through.

By the way, I know his above quotes to be accurate because I watched him say them on live television during the many multi-hours of coverage this 2016 demonstration received and then sped it back using my Direct TV rewind button in order to write it down exactly and remember it. That’s yet another way the world has changed for the better since the 1960s. Not only do you get to see government and civil disobedience live and unedited, you have the opportunity to record it permanently in case you forget it, don’t pay attention in the first place or if anyone doubts you.

I have the power!

I’ve been thinking a lot about the sixties, seventies, fifties and even forties for several reasons this week. No, they don’t all have to do with the passage of Brexit and the anti-immigration wave not only blowing throughout England but back on to and throughout this country via our current Republican presidential nominee. They also have to do with my home TV viewing habits via one of our own fave channels – at least in this household — Turner Classic Movies.

This month TCM’s been showing musicals from the 1960s and I was seduced into too many off hours of diversion in the last few weeks somehow – mostly recently several days ago by the film versions of The Music Man (1962) and Bye Bye Birdie (1963). Now don’t get me wrong, neither of these are great films but they are infinitely watchable and entertaining. So evocative are they of another time and place and naiveté that doesn’t exist anymore that it becomes impossible to turn away.

Wouldn’t it be wonderful to imagine that there is a town still as rosy as Sweet Apple, Ohio where all teenage girls looked like Ann-Margret; with fathers who had the gay sensibilities of Paul Lynde (Note: But you didn’t have to talk about them) and where the country’s biggest problem was just how on earth we could all handle the departure into the military of our own #1 word famous swivel-hipped pop star? (Note: And one with no discernible bloodshed because we clearly were fighting no discernible war).

Well, the only thing that could be better is viewing a kind-hearted con man re-energize one of our small towns citizen by citizen and, through his deeds (and unbeknownst to himself until the end), finding that he does have a soul underneath it all. So much so that he decides to leave his life of capitalistic crime, fall in love with and marry the local spinster librarian, and spend the rest of his life as a mere private citizen in the very town that at the beginning of the story he was determined to massively rip off? 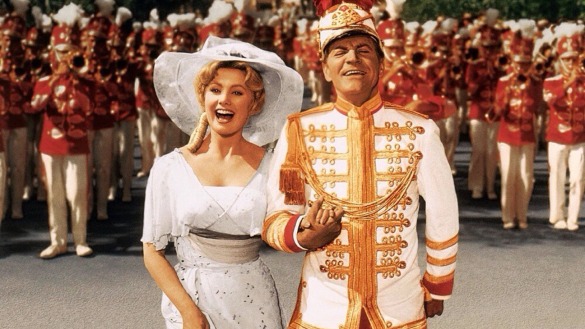 Those are the thumbnail plots of Bye Bye Birdie and The Music Man and a pretty good representation of where we were sociologically in the early 1960s. No wonder such a significant portion of white America, not to mention white England, are nostalgic for the past and want to take our country(ies) back….there????

Yes. Make no mistake about it. That’s where they want to be. To a place that, well, never existed.

Because you can’t return to Sweet Apple, Ohio without returning to a time when Rep. Lewis types not only did not serve in Congress but would get their skulls bashed in or worse in some (many?) places if they dared to eat at the same lunch counter with you. And to return to the kind of Europe that Brexit proponents are suggesting – a time where citizens of one country were not free to emigrate and work in another nearby European country as legal citizens – means also going back to a place in history not that far removed from our most horrific example of nationalistic pride and anti-other/immigration gone amuck – Nazi Germany.   You just don’t get to say that brown and black and yellow and every shade in between of people are taking your jobs and your opportunities so you’re going to outlaw them from coming any where near you without also owning the idea that you are opening the door of advocacy for a time you would most likely publicly eschew.

This appears to be the dilemma now. Do we trudge forward in love as Rep. Lewis suggests? Or do we go back to the real time – not the fantasy of it – that Brexit, Trump, and the brewing worldwide nativism movements suggest?

As much as I like a good or even decently nostalgic movie musical – I’ll choose to follow a battle-scarred leader like Rep. Lewis any time of the day, week or year.

I mean what could happen, right?