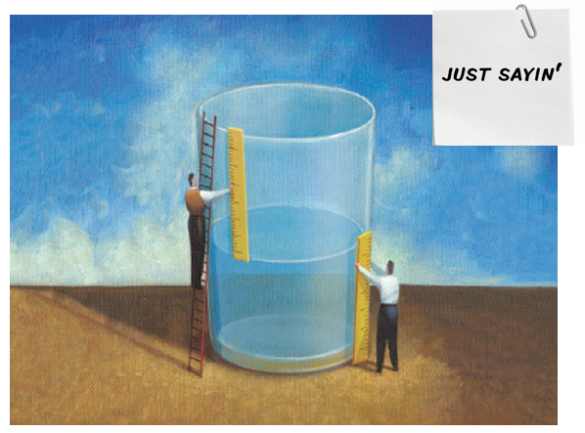 Confusion is both underrated and overrated. I, for one, like clarity. I want to know what I’m up against, the potential minefields in my path and all possible modes of action to be employed in order to avoid total disaster.   Pessimist? I like to think of myself a prepare–a-tist.

For instance, when I was a reporter I was always as thoroughly prepared as possible prior to interviewing a subject. Cover an obscenity trial in my twenties? Sure, no problem. Let me look up some past cases AND see if anyone knows information about the presiding judge. This took more effort than you can imagine in the late 1970s – those halcyon days prior to the Google. You actually had to go to the library, makes calls and – perish the thought – talk to people IN PERSON.

In the 21st century it’s a lot easier to be forearmed but the problem is there’s so much information that it becomes overwhelming and occasionally counterproductive. I mean, how is it when you discover a stray sore or a relative gets sick you manage to find thousands of horrific anecdotes on the web (Note: and certainly Web MD) that exactly diagnosis you or your relative’s now clearly terminal symptoms? Can a pimple be a tumor? Most certainly! But you can also get hit by a car while crossing the street. Or die crossing the street because those piano movers on the 5th floor above you who had fried food for lunch forgot to wash their hands prior to the transport, thus causing their baby Grand in that moment to slide through their fingers and hit you square in the head. Now you’re more dead than Road Runner because life is not a cartoon – only your death.

Okay, clearly I’m also not an optimist. I will concede that. 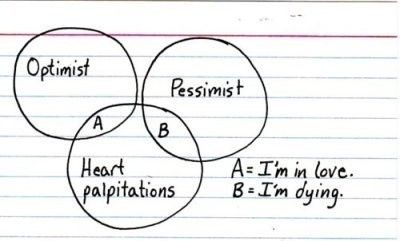 I’m pretty much always the B

But let’s make this bigger than myself. There are many world life circumstances where too much clarity can also be a bad thing. Do we all really want know the ins and outs of the financial system and every potential at-risk territory in the Middle East, not to mention terror threat? Even as I write this and you read it our collective brains are exploding. Perhaps that’s reason enough for the rise of the Orange Clown. (Note: #Drumpf #Trump #Harrumph). Well, there has to be some reason and that one’s as good – or as bad – as any, right?My 87-year old-Dad underwent an angioplasty procedure this weekend. His answer when I ask him how things are the last few years is always – “Great! I got up today!” An inveterate gambler, he measures everything by the odds and bases those odds not only on stuff he’s read (though rarely on the web) but seen, experienced, heard about or overheard. In other words, in his own way he too researches. So when the doctor beforehand told him there was only approximately a 1% chance of anything going wrong with his upcoming procedure his immediate response was “I like those odds!” and he decided to take them and go through with it.

Injecting a little humor along the way

And hopefully it proved correct. His heart was substantially blocked, as it turned out, and is now unblocked – and the procedure was minimal. Though he’s still a bit loopy from the meds and that’s a bit scary – especially after I went on the web to look at worst case scenario possibilities, which included loopiness that might not go away all that soon. Which is sort of how this train of thought here today got started. Because his current confusion made me wonder – was I not clear enough before this all started about what all his possible outcomes were if we went ahead with the “procedure?” (Note: What a ridiculous word – as if it’s a courtroom, or worse yet, Congress). What were the alternate choices he or I might have taken? Well, doing nothing about his heart would have likely been fatal. Still – the present isn’t totally ideal either. Though even in his current confusion he knows who we all are and they tell us the meds (and their after effects) will soon wear off.

Certainly, that’s not good enough for me – pessimist and glass half empty person that I am.

And yet – I was encouraged by one small development this afternoon – less than 24 hours since the – um – fateful “procedure.” 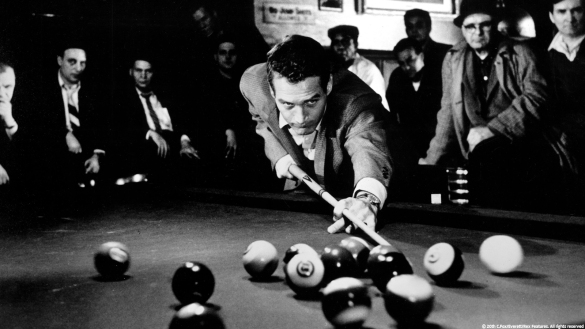 On with the show

We’re in his room watching Turner Class Movies – his favorite – and what better movie to be on than the original The Hustler starring Paul Newman as aspiring pool hustler Fast Eddie Felson and Jackie Gleason as legendary pool shark Minnesota Fats – battling each other to their financial and psychological deaths. Not only was it about gambling but my Dad used to shoot pool as a teenager and then later, all through his life. How clearly perfect!

We’re watching the movie and he seems to be into it. We talk about the cast and he nods, acknowledges how young Mr. Newman was after we bring up his mind. And yet, something feels off, confused. Which is then verified by him saying – that’s Jake LaMotta.

No Dad, Jake LaMotta is from another sports movie, Raging Bull. And he was played by Robert DeNiro. But let’s look it up and see who else is in this movie.

See, I’m thinking if I can get him talking, it – or some of it – will all come back.

Except then I go on IMDB and come up with the cast list, Yeah, Newman, Gleason, Piper Laurie as the girl. Then there are character actors Vincent Gardenia and Michael Constantine, followed by – what’s this?? JAKE LaMOTTA?

He acted??? And in THIS movie?

So I look it up and I see clearer than the most clear L.A. day:

Dad, did you mean Jake LaMotta was the bartender? Uh yeah.

Which leads me to believe confusion is relative and clarity is merely a concept we tell ourselves in an effort to be prepared for the things we should be.

It also reluctantly taught me yet again – for the 20th time – every so often father DOES know best. Especially when I came back later in the day and he was a bit more normal.   Not only did he remember everything about the movie The Hustler, what hospital he was in and the “procedure” he had received the previous evening – he had no memory of the first conversation I had with him just hours ago when he was still loopy on the meds about Jake LaMotta and The Hustler.

Just like him to not remember something we clearly spoke about that worried me.

No confusion there.  That much I’m clear about.