“For every action there is an equal and opposite reaction,” scientist extraordinaire Sir Isaac Newton theorized more than 400 years ago.  This was heady stuff at the time — the idea that there are LOGICAL consequences for every bit of the naughty or nice behavior you put out into the universe, rather than retribution or praise from God, Santa Claus or Donald Trump’s money, depending on what time period you live in and who or what you see as your Higher Power.

Newton wouldn’t seem to have a lot in common with Mr. Trump and his 2012 ilk, though there is a movie that oddly sees something of a connection.  That movie is called “Cloud Atlas” and no one was more surprised than I was at the spell this perfectly imperfect film has cast and still continues to hold over me.

You really got a hold on me…

Let’s face it, you don’t go to studio movies these days expecting to be forced into considering the existential issues of life unless it’s directed by Paul Thomas Anderson or stars a superhero in mechanical armor, spandex or some rare combination of both.  It is also worth noting that in the case of the latter, this discussion will take place only in the broadest of good vs. evil terms, sort of like a political fight on either Fox News or MSNBC.  It is equally worth noting that in the case of PTA (one of my faves), this will only persist if he continues in profit, Oscar wins or some combination of both as time progresses.  (Unfortunate Translation: You better enjoy movies like “The Master” and “There Will Be Blood” while you can, because it doesn’t look good).

Using that logic, it is quite unlikely “Cloud Atlas,” with its mixed reviews, mediocre box office returns and general lukewarm reception among the Hollywood elite, will emerge as the kind of “asset” (au currant studio chief jargon for movies) film studios will lust after in the near future.  But that doesn’t matter.  Because as sure as I’m typing this, that’s how positive I am there are other writers, directors and actors (those people known as the above-the-line talent – or engine – for new work) who will be inspired or moved enough by Lana Wachowski & Andy Wachowski and Tom Tykwer’s attempt to tackle a seemingly unfilmmable novel of depth and profundity and, in turn, seek to do something with equal meaning and depth that they personally connect with.  In other words, Newton’s theory holds not only in science but also for artistry.  Said even more plainly — just as studio chiefs might be repelled at $24 million in US box office grosses for an unusual film that cost $100 million and probably an equal amount to advertise, the creative forces behind movies (well, at least one, two or three of them) will be moved and attracted in the exact opposite direction for the exact opposite reasons of their bosses – those of intellectual substance rather than money. 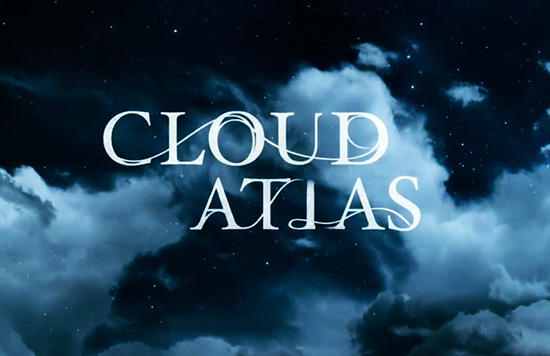 I don’t love much about the movie business these days but I especially do love this.  If nothing else, that’s what “Cloud Atlas” and the perceived highly unlikely (in some quarters) re-election of Pres. Obama (because I am a die hard liberal who wants to bask in getting almost everything I wanted on election night), did for me this week.  See, for most humans, much of life’s bottom line profit is not about what’s measurable on a balance sheet.  It’s about intangibles like fulfilling inspiration to do good stuff, bettering one’s life or others’ lives through telling your own story in some form, or moving people to take action, any kind of action, on their own.  That is why Pres. Obama won the election and why cutting public funding for PBS – or refocusing our educational system on multiple choice test scores while chopping its creative classes – will never net the result we truly want, no matter how black and white positive it looks on a logic board.  Gravity and medical science can be proven in fairly absolute terms by thinkers such as Newton and those who followed him, and guide us in the quantifiable correct direction in medicine and science.  But what moves (or will move) the human spirit in the area of creative action and that which will produce a truly satisfiable result is an incalculable combination of events – sort of like the show business version of predicating a hit recording, TV ratings bonanza or the latest international box office hit.  Despite all the tried and true formulas or computer programs that promise you such, there is always, as even Simon Cowell has figured out, that human X Factor. (Note:  You have no idea how it pains me to give Cowell any credit at all – but – there it is)

In any event, back to “Cloud Atlas.”  Here’s the big money quote from the movie and novel – which out of context might seem like a greeting card from the 1970s – which is probably why I like it to begin with:

“…Our lives are not our own. From womb to tomb, we are bound to others. Past and present. And by each crime, and every kindness, we birth our future…”

I can remember writing a letter to Newsweek in the early 1990s rebuking its cynical attitude towards what it termed leftover “hippie thinking” of the sixties.  My position has always been that it was how much the youth of that time believed in the healing power of peace and love that made that group a big part of the reality that helped force the US government to end the Vietnam War and to begin to face some of the great social issues of that time (e.g. gender equality and gay rights).  Like a book whose ending is yet to be written, or a screenplay that is years away from being finished, no one knew for sure what the ending of those protests or way of thinking would be.  But the feeling that something had to be done to create the preferred ending you wanted – that kind of blind faith and, yes, hope – is what caused people to act.  This is not unlike the mass turnout of 18-25 year olds for Pres. Obama (a group that as a college professor I know quite well) who are still at the point in their lives where they believe that change is possible despite all seeming evidence to the contrary.

If one can reduce the 6-8 different interweaving stories in “Cloud Atlas” to a single theme this is what they’d amount to.  Each character is faced with a moral dilemma over which they are challenged and each has to decide whether they are courageous enough to step up to the plate despite all evidence to the contrary that there is much of a chance to succeed.  Because it’s a movie that takes place over the course of numerous centuries, and because most commercial movies today have beginnings, middles and ends, we get to see how dependent upon each other these actions are over time to not only the survival of every character (and over whether they’ll have a happy life) but to the survival of mankind.   There is no such crystal ball that I know of for any one of us forced into making moral decisions at our given moments in time – whether we’re a writer, singer or actor deciding on what project we want to direct our creative energies to, or whether we’re Mother Theresa, Gandhi, Martin Luther King, Nelson Mandela or some hippie chick or dude.  The only thing we do have is the gnawing belief that when push comes to shove something must be done – a belief that moves us to what, on the surface, might seem to be the silliest fruitless or most unwise action imaginable until it turns out well.   Certainly this same action can just as likely be a self-destructive or defeating one, at least in your lifetime.  Yet also at the same time this very action can lead to yet another reaction or additional action by someone else that will produce an entirely different and favorable result in the future for another person or group or, to be lofty, entire race of people we have yet to or never will meet.

The film “Cloud Atlas” is certainly reflective of all of the above.  Tom Hanks is distractingly miscast as some of its villains and perhaps even a bit on the nose as its hero.  And certainly the movie’s 172 minute length can be a lot to take.  Also noteworthy is the relentless shifting narrative in the first 40 minutes to the point of distraction, not to mention the obviousness of some of the stories and their lack of depth.

But some movies, just as some lives, are greatly flawed yet ultimately a whole lot greater than the sum of their parts.  I would argue this is the case in particular here.  It is not the message inherent in any one of the C.A. stories but how the stories ultimately work together and build to create a much more powerful overarching testament to empowerment.  And a side note to aspiring moviemakers – this is done through not only what it’s saying but by the very act and execution of its technical construction.

In my mind it is not an accident that one of the directors of this film and its major creative force – Lana Wachowski – is a woman with a personal story unlike any most of us will encounter.  Lana, up until a few years ago, was known simply as a famous director and writer who, along with her brother, was merely responsible for one of the biggest movie franchises of the last thirty years – the “Matrix” films.  But Lana was also seen as a non descript looking middle aged man known as Larry –a secretly transgender person who by all accounts psychically suffered until she had the wherewithal and means to take change of her circumstance of birth and proceed with self-acceptance and whatever gender reassignment procedures she chose.  These procedures have scientifically evolved to the point where there is a way to measure their chances of medical success but certainly not to the point where there is as empirically reliable of a way to measure their chance of psychological success given the limits across the board for any absolute measure of human happiness and contentment.  Yet, like the theme of her film, which she admits became a bit of a metaphor for her life, Ms. Wachowski decided to make the leap anyway because she knew in her heart of hearts it was the right thing and perhaps only thing she could do.

This belief is in part what prompted her to spend so many years “obsessed” with bringing “Cloud Atlas” to the screen and in using her “Matrix” clout in order to do it.  Certainly, she had a big stage to take her leap of faith.  But the size of the stage has nothing to do with the size of the personal leap or the eventual effect it will have on the rest of the world.  As the movie posits, there is no way to ever know that unless one has a crystal ball.  There is just a belief in oneself.  And the universe.  And the fact that Newton’s theory will tip towards the forces of good instead of evil.  This means acknowledging even though evil or the undesired outcome will always exist; it is equally true that the opposite can very well, and perhaps even likely, happen.

That’s why a 2012 message of 1960s hope and change will never go out of style. This, above all, I find reassuring.