Carrie Fisher wrote these words for Meryl Streep to say as a fictionalized version of herself in the semi-autobiographical film Postcards from the Edge:

Those lines are condensed from a climactic speech where a perennially snide, yet terribly insecure and newly sober actress for the first time admits she realizes how fortunate she is to be alive and to have opportunities in which to thrive.

It was an embarrassingly honest bit of contemporary self-parody 30 years ago.

I mean, who is truly going to feel sorry for a talented young woman born into a wealthy show business family whose real life inspiration played Princess Leia in Star Wars?

But who knew it would have additional resonance all these decades later where so many of us are walking around wringing our hands over what our 2021 lives are, are not, or may never be?

The very same people who could have predicted that both Princess Leia AND the actress who played her would also be gone.

It doesn’t help that the news gives us daily warnings that the Covid Monster we assumed we were beginning to slay is actually still lurking just outside our door and ingeniously getting even closer.

The latest tidbit is that the viral load for those infected with its new and improved Delta variant is ONE THOUSAND TIMES higher than its original and almost TWICE as CONTAGIOUS.

This reminds me of another line from another even more classic film, The Wizard of Oz.  After her house accidentally drops on the Wicked Witch of the East and that witch’s evil sister stands before her, an already nervous Dorothy is immediately warned by her friend Glinda that:

This is the Wicked Witch of the West.  And SHE’S WORSE THAN THE OTHER ONE!!

Considering film is our best cultural representation of what it’s like to be human, it shouldn’t be at all surprising that so many of us are in our current emotional states.

Well, I for one, had to take at least a partial step back from all of it this week.  There is nothing clever nor particularly profound about this decision except, well, I had to do anything but intermittently freak out amid, well, intermittently freaking out.

And as someone once told me, sometimes it’s better to do something, or anything, than nothing.

(Note:  I think it was a therapist who gave me that advice but I can’t be entirely sure I actually didn’t once read it in some old Carrie Fisher interview).

In any event, since I wasn’t up for volunteering in a space where I would be around anyone or anything I didn’t know (or anything or anyone who wasn’t vaccine certified), I chose to go back to the one constant in my life that has almost never let me down – friends.

Another close friend I first met in 1982 is here for the summer and we’ve had a bunch of get-togethers.  I’ve also had a ton of long conversations with family members and others close to me that I haven’t talked to in a while.

I even – and I know this is shocking – made it a point to actually pay more attention to the person I see every day of my life – my HUSBAND – and actually make it a priority to LISTEN to what he had to say before I SAID anything.

The latter might not seem like a lot but, well… okay… the long married/long term couples will tell you…

I can’t tell you any of these was a panacea aka CURE for what’s been lurking outside my door, or yours, but it did help – A LOT.

At least for a while.  Until it didn’t.

It was at that time that I reached out to even more people and began to listen and look around at my surroundings.

That helped too.  A bit.  At which time, things got somewhat anxious again and I started to write stuff.  Not a lot but enough to get me through some rough hours.  As it has so many times, through so many decades before.

And when that lost its effect I even went for a run and…worked out?!!??  A bunch of times.  That, in turn, bought me a whole bunch of extra, non-worrying hours.   Much as it hurt and I didn’t want to do it.

Oh, and it also brought….appreciation.

See, at the end of the day what you realize is that any life at all is art, woefully imperfect and consistently stressful, daunting and even haunting, though it may be.

Though what I can do, and all of us can do, is live our lives with some meaning AND with the people that make us laugh and make us happy, and not let it poison so much of what is good about living at all.

It’s not a perfect art but, as Ms. Fisher observed all those decades ago, that’s not what life’s about anyway.

She also once famously said:

Amen to that, also.

Meryl Streep – “I’m Checking Out” from Postcards from the Edge 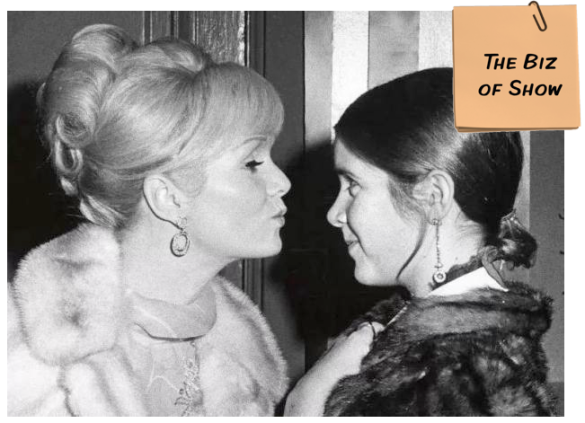 There are many ways to spin failure. They didn’t get it. They sabotaged me. They did nothing. They marshaled forces against me. The world wasn’t ready. The dumbasses couldn’t see. The dumbasses were offended.

What is not in the spin zone is – I suck. Or I failed. Certainly not – I tried my best and will do better next time. That’s not very satisfying. Except when it is. 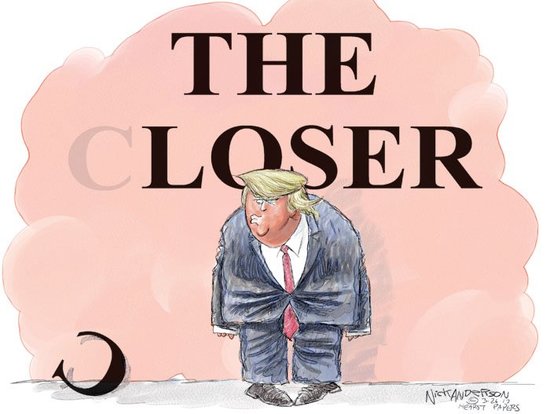 but enough about me this week…

This came to mind watching the public memorial tribute to the lives of Debbie Reynolds and Carrie Fisher this weekend – certainly two people one doesn’t associate with failure, or even spinning. Though with Debbie you can imagine a heavenly Hollywood dance floor or simply put on one of her musicals and get there in the latter case.

The way they were

As a dear friend texted me, it’s strange to live in a time where we live stream memorials. Nevertheless we and many others were tuned into debbiereynolds.com (Note: Could I make that URL up?) where we watched highlights and tributes from the lives of the world’s Star Wars Princess and forever young ingénue Kathy Selden from Singin’ In the Rain – two iconic film characters from classic movies that will ensure the two women who played them will live on far beyond any of us.

That is, unless Cher or Barbra are reading this. Which I doubt. Though, one never knows who’s reading what these days. Hope springs eternal. For some of us, anyway. 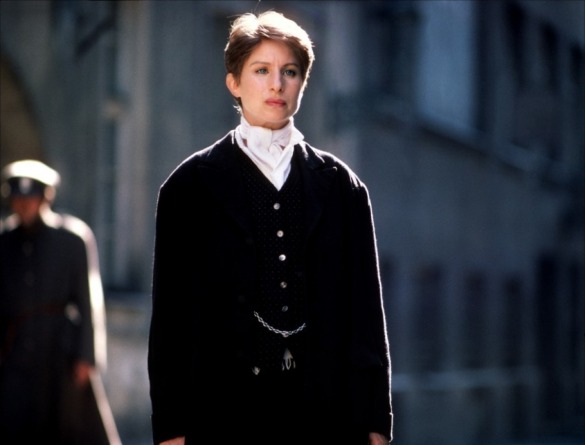 Barbra can you hear me?? #couldntresist

Which brings us back to Carrie and Debbie. One of the highlights of the two plus hours of remembrance was a new James Blunt song that was played over a series of photographic images of Carrie and the bedroom in which she wrote and held court. You remember James Blunt, don’t you? He had that smash album some years back called Back to Bedlam which yielded several chart topping songs and then somehow suffered one of the greatest backlashes in the history of the music business. 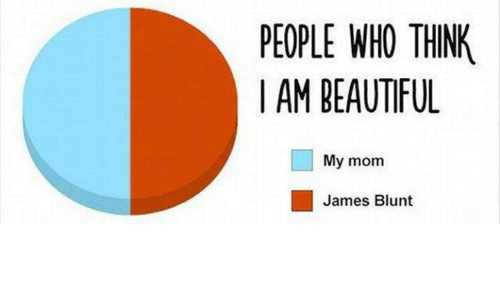 You’re beautiful it’s true (stuck in your head yet?)

It became hip and happening to hate listen to Blunt. He somehow went from sensitive singer-songwriter to goopy cornball whiner. Not that he didn’t have some successful follow-ups or a core of loyal fans. He did. But nowhere as huge and not with anything approaching the verve of the memes of dismissal towards him.

Blunt, himself, became so aware of where he stood in the eyes of some of the public that after the death at the end of the year of his good friend Carrie Fisher (Note: He lived in her guest house and wrote some of his most famous songs there), he tweeted:

Full disclosure: I always liked Blunt and even before that tweet still occasionally played that CD, which, yes, I own. And oh, double yes, I do still own and even buy CDs.

I know this is how you see me #grampychair

Hate gossip away on that latter point if you care to. For the point here is to not prove the worthiness of Mr. Blunt. He does that himself with the new song he wrote in honor of his good friend Carrie  which debuted at her memorial service. It’s ironically as good or probably better than his best and will surely be meme’d around as the majority of listeners comment in shock about its value. While the naysers comment how it took the death of a good friend for him to come up with something listenable – if they even go so far as to at all place him in the playable category.

This is the essence of spin.

As for failure, it’s relative and goes with the territory of artistic endeavor. Or, make that human endeavor. 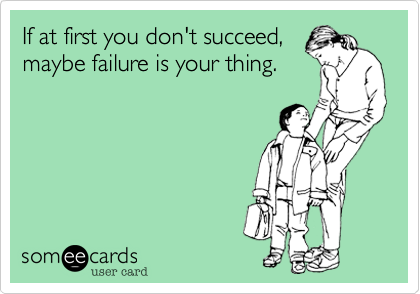 Or just embrace it!

The majority of us might admire or even envy Debbie and Carrie and not associate them at all with the type of “failure” we believe we are experiencing or have experienced or are inevitably going to experience, but nothing could be further from that (un)truth. Debbie had a trio of cheating husbands, lost all her money, endured national scandal and like all Hollywood women of a certain age was tossed away by the business that spawned her only be to brought back in at various points when it suited the suits. Though it was fine at that point because she had more or less figured it out.

As for Carrie, well, we all know, right? The drugs, the gay husband, the declining acting career. The sin of growing older and gaining weight! The mental illness and breakdowns. And then – the temerity to…write about it all? With humor? And do it well? One can only imagine the potential she saw in that from a hospital bed or alone in her room late at night when she couldn’t speak. I didn’t know her but it’s hard to imagine she saw it as anything close to a recipe to undo any perceived personal failures. No doubt more like a self-expression of whom she was and what she needed to do in order to survive the down times. 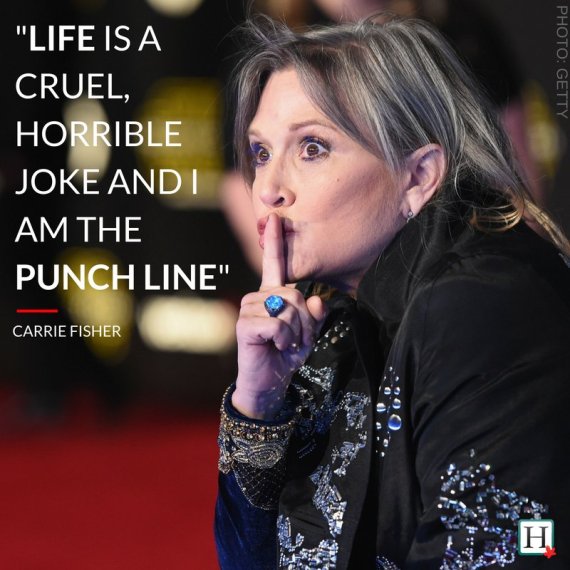 This, and countless other quotes too numerous to name

Of course, this is not to categorize things like mental illness, weight gains, marital breakups, career lows or O.D-ing as failures. That’s for the Internet and society at large to do for us. And they will do that. Relentlessly. And sometimes in the form of places and people much too dangerously close to you/us. (Note: As will the bathroom mirror).

It is more of a reminder to own your inner James Blunt, whatever that is, and move on. And as Carrie’s fictional Mom said in the move version of her memoir, Postcards from the Edge, “I don’t blame other people for my misfortunes.” And as the fictional version of herself shouted back, “I took the drugs, nobody made me.” Which is all fine when you’re in an analyst’s office or writing about your life – and often one in the same.

It’s getting past the admissions or the proclamations and moving on to something – anything else. Doing laundry is a start. Though I prefer cooking or something artistic. Even any type of exercise will do it.

You know what I mean even if the current president of the U.S. (at the moment, that is) does not.

You didn’t think I’d leave that out, did you?

notes from a chair
Blog at WordPress.com.
Loading Comments...