Not much.  Especially since at least 12 different people have assured me in the last 24 hours that the world as I know it will soon end.

As if it already hasn’t.

Anyway, this is one of many reasons why I decided to tune in to the mostly virtual 72nd Primetime Emmy Awards Sunday night.

What could be better than escaping into a sea of pop culture calamity?

My hope was for a night of diversion and bitchy commented asides that would allow for the venting of so many things that, okay, I haven’t exactly been holding down.

At all.  And not towards anyone.

If you’ve been reading here lately, or ever, you know.

And we still love you completely

Still, my husband and I are suckers for free Hollywood crack so gathering ourselves and our guacamole and chips around the TV at 5:00 PST to not exactly hate watch, more like love-hate divert, seemed like the best idea in at least five minutes.

Plus – we don’t have to social distance, wear a mask or even think about that sh-t – I mean, patriotic duty and kindness towards our fellow citizens – which we do happily since it’s no big deal and, truly, why would anyone in their right mind be complaining about it at this point?

Like your past, who you are and what you are thinking follows you around like the plague and can rear it’s ugly head at any inopportune moment.  Which is why it’s best to show that unsavory, albeit snidely fun side of you only around people who get you’re not the total a-hole you seem to be, people like your significant other, best friend or even pooch…..during a Hollywood awards show…when you can talk back or even catcall to the screen at people in fancy clothes and over-privilege who can take it.

WWJRD (What would Joan Rivers Do?)

This, of course, was not to be on Sunday night.

This, in fact, was the opposite of what we hoped.  Overly polite people trying their best to gingerly entertain in a responsible way while consistently making the point that there was nothing really important going on this evening on this show except, well, group human hugs in a particularly difficult time of what could be our soon-ending civilization.

But, I mean, what did we think?  That host Jimmy Kimmel wouldn’t wear rubber gloves to hand the winner’s envelope to in studio presenter Jennifer Aniston?

Or that we wouldn’t soon see that despite the early canned laughs and celebrity shots the massive Microsoft Theatre really had no audience at all and Kimmel was  really speaking to a sea of appropriately empty seats?

Or that instead of buying seats and ads and throwing lavish after parties the studios and TV Academy would pool their money and combined raise $2.8 million during the broadcast to feed hungry kids? (Note: nokidhungry.org).

Or that many of the award categories, nominees and winners would be read by COVID-19 first responders like nurses, doctors, farmers and truck drivers?

The people putting their lives on the line to keep society going?  People taking time out of their day to appear on a silly awards show to amuse the likes of me?

These were people I bet were even expecting half of us watching at home would make fun of their hair, how they spoke or at least whom they were wearing.  That’s how cool they were.

Alas, we couldn’t do any of those things.  Nor, I suspect, could much of anyone else.

This but there’s nothing else on

Because despite how much we might very, very, VERY much want it, there is no true escape from the reality of these days.

I mean, if an award show can’t even deliver that, we truly have no choice but to face facts and become the actual heroes and heroines on our favorite TV shows in real life.

So yeah, it’s great that Schitt’s Creek set a new record for a TV comedy and swept in every major category – series, directing, writing, actor, actress, supporting actor, supporting actress.  And that an out and proud gay guy, showrunner Dan Levy, took home four awards in one night.

For this scene alone, Jeremy Strong earned it

Not to mention it’s great Watchmen was awarded best limited series, writing, actress and supporting actor for its original genre bending depiction of the destruction of Black Wall Street and the justice that, in turn, could have wrought. 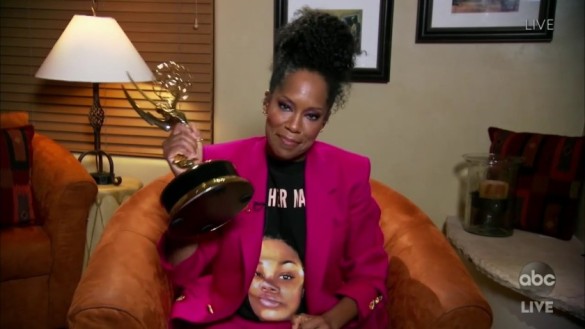 I mean, is anyone better than Regina??

Kudos to all of them.  And many, many more not mentioned.

But what this year’s Emmys will best be remembered for, if it is at all, was for being the first major televised awards show up that best encapsulated the strangeness of our times.  (Note: Feel free to substitute strange with the angriest, or bitchiest, word of your choice).

As much as it did its job I’m hoping next year the 73rd go-round are A LOT worse, and, in turn, bring out the worst in those of us at home.

Because that will mean all of us, on the whole, are doing a hell of a lot better.