It was the sneer that finally won me over.

I’d like to say it was Pres. Obama’s lofty message of inclusion or George W. Bush poking fun at himself and finally seeming to mean it.

Even the lost, help me looks on the faces of Ivanka and Jared as they desperately searched the room for allies, or even a safe place that would never materialize, couldn’t match it.

That was because this was a simple rebuke to everything they now stand or perhaps sit for, as they were forced to do on this day.

Yup, the words that preceded it made it better.  But many of the words in Meghan McCain’s 17-minute eulogy of her father, Sen. John McCain, at the National Cathedral on Saturday were powerful.  Though none more so than:

The America of John McCain has no need to be made great again because America was always great….

Those words, clever though they may be, might have hung in the air as yet another slogan of pure patriotic psychobabble were it not for – that sneer.  That two

seconds of unbridled emotion that encapsulates everything the majority of the country now feels each and every day.

You can’t plan that look, it just happens when you’re in the moment and feeling it.

Okay, perhaps Meryl Streep could mete it out but who among us has that kind of technique???  There are 21 Oscar nominations to answer you back – NO ONE.

Well, yes, but only because I’m dead.

Still, words are words, slogans are slogans and who among the now 60% of the country that stand against Trump haven’t at one time or another thought, said or heard variations.

Certainly Ms. McCain’s aren’t much better than any of the ones we’ve encountered and will ourselves utter in the not so distant future (Note: Nee tomorrow).

But that spontaneous look of disdain the minute those words sputtered out.  Heck, that was some rare, unvarnished truth on display on the national stage. 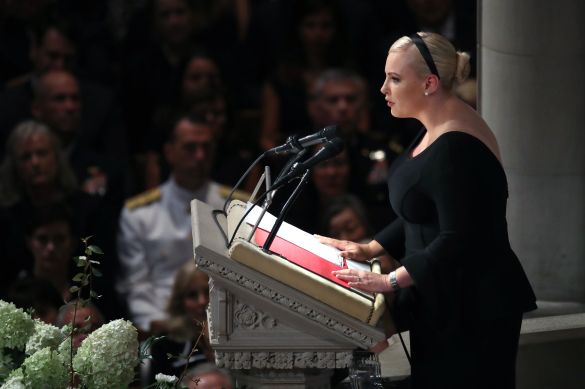 Say what you will, but this was REAL

Anyone who has lost a parent will tell you that nothing you feel is phony.  You might know Mom or Dad is terminally ill, play out the moment endlessly, but still, when it occurs, and for an unforeseeable time afterwards, you are in a jagged whirl of gut-wrenching reality.

Not everything you SAY, especially the polite and nice stuff, is true but every emotion your face SHOWS is real…and raw.   Every moment of anger, of disdain, of acidic retribution (especially the non-verbal kind) are as dependable as the fact that for the rest of your life you will be either motherless or fatherless.  It doesn’t matter what is later countered, massaged or full out denied.  Trust what a mourner is showing you, if you dare.   They are the most honest moments any of you, or us, will ever see from them.

I’ve never been a Meghan McCain fan or hater.  She’s one of those people – and they are rare – that I’ve never had much of an opinion about because she’s had so little effect on my world.

That’s all changed.  You can count me now always on the side of fan.

It takes a lot to get up before a large group of people at your parent’s funeral and in so many non-words, tell one of his enemies to go F—K himself.  Now think of what it takes to actually have the nerve to say it in words, feel it on your face, and do it before an international audience, where it will be preserved in perpetuity, to the President of the United States.

Okay, the Electoral College President of the United States.

As far as we know.

I’d like to think I could do that, gladly, but I’m not entirely sure.  It’s one thing to tell DJT to bugger off on Twitter, or in your living room to your TV set – as I’ve roared countless times – but it’s a whole other ball of wax to muster it publicly and withstand, as Kathy Griffin calls, it, the Trump Woodchipper.

You won’t read here what the Trumpsters are saying about her but go online to the platform of your choice if you need confirmation.  Though it doesn’t take much imagination.  They’re not known, for the most part, to be original with the insults.  Pick up any rock pre-1962 and something might crawl out akin to what you might read.  Or hear. 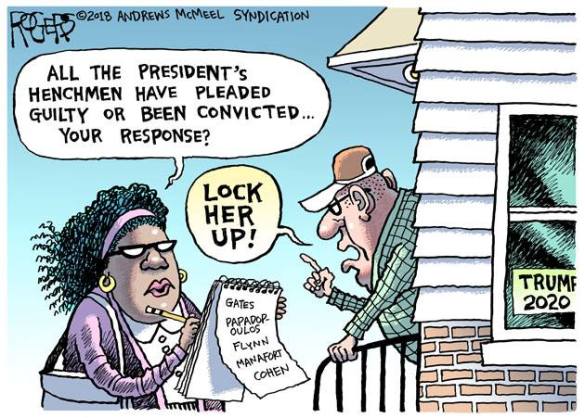 I’d like to be able to take a lesson from the words said by Pres. Obama at the service.  To really hear him and act accordingly when he says:

Well, I believe I am doing that by in some small way by writing about the death of a person with whom I never agreed with politically (Note: Actually, I loathed his views on pretty much everything and will never forgive him for creating Sarah Palin) and really seeing him, his family and those he surrounded himself with merely as people who today I could not only learn something from and admire but…actually…could like.

But to accept as valid or do anything but repudiate what Sen. McCain’s former campaign manager Steve Schmidt on Saturday called….

…the vileness, the corruption, the self-centeredness, the selfishness and the cruelty that we see emanate from the White House in the form of President Donald Trump everyday….

It’s s a bridge too far for me.

And that goes for anyone who works for him, votes for him or in any way supports him.

For me, it only starts with a sneer.    I have no idea where it will all end.

Unless we all VOTE.