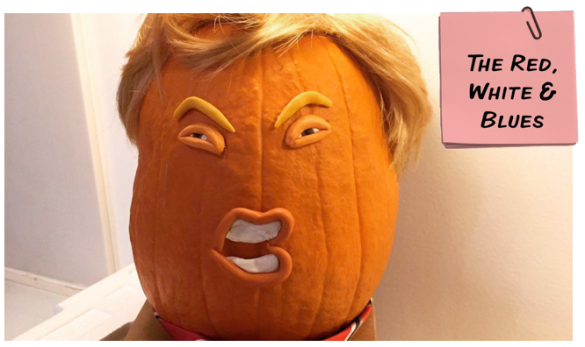 It’s difficult to watch the real life Leni Riefenstahl style propaganda film Donald Trump is trying to live each day he serves as the Electoral College president of the United States.

And yes – Riefenstahl was the official director of the Nazis – Hitler’s personal chronicler – with such films as Triumph of the WILL (Note that word in the title) to her credit.

And double yes – I am saying Trump fashions himself as a modern day Hitler – one who demands to be adored and rule with an iron hand as he WILLS to personally wipe out ANYONE and EVERYTHING that stands in the way of his adoration.

And, well, um – yeah – I’m not ruling out his attempts at future US concentration camps for particular groups of outliers he doesn’t like if he continues to remain in power. It will have to be craftier, done in a 2017 style and method, and I doubt he could pull it off. But I’m not eliminating it as his final solution.   Because I also doubted this ignoramus would be elected.

We don’t want people with bad, bad ideas coming into our country.

That was just one of many rousingly vague bromides that spewed out of his mouth in Saturday’s latest propaganda speech in Florida.

In the context of the remarks he was referring to immigrants.   So let’s take him at his word, even though he doesn’t seem to have one worth taking, only many that stream out of his sub-consciousness in scattershot directions.

What exactly ARE bad, bad ideas? Who decides they are bad? And how? 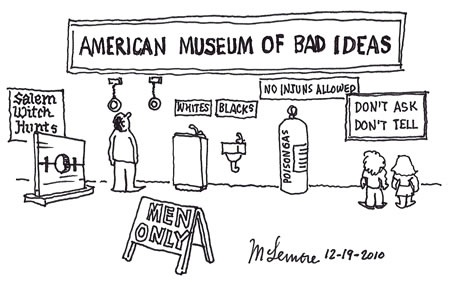 Well, he indicated in his speech the answer laid somewhere between his skewed interpretation of the appeals court opinion overturning his recent executive order to limit immigration and the actual special powers granted a president to enforce laws via our Constitution. So to prove his point he quoted said law in his speech, reading the following from a piece of paper.

What the subject of his own Riefenstahl mind movie leaves out – and what separates the U.S. from past and present dictatorships – is presenting some sort of reasonable proof or argument of one’s assertions of detriment to the gatekeepers of checks and balances enshrined in our constitution. That is to say that blanket refusal of entry – and in many cases – RE-ENTRY of tens of thousands of people, many of whom already hold green cards and are actually re-entering their own homes, dorm rooms or childhood homes – needs to be reasonably defensible in court, in life, or otherwise – or it is illegal. 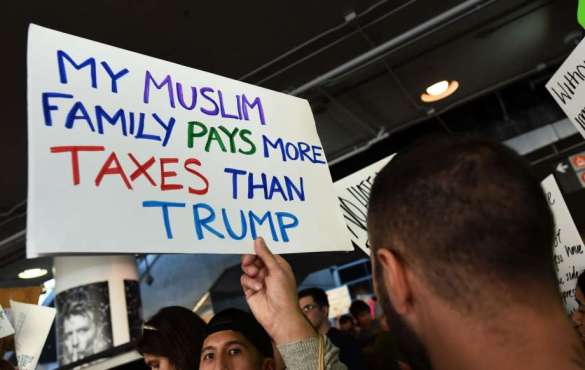 And we know a few things about illegal dealings… don’t we Don?

As is the case with dictatorial thinkers (nee the president who lost the popular vote by almost 3 million), there is an outright rejection of anything that challenges their ultimate power. In fact, his voice grew fiery and his body physically jolted as he bridled at how his people were now hard at work on a NEW (world?) ORDER to challenge the court’s blockage of his original executive one. This was most apparent in the words he chose to describe his view of what the Constitutional statute enshrining his powers that he had just read from did to anyone who opposed him.

Every word here is a total KILL for the other side.

LET ME HEAR YOU SAY IT!

There is a style and rhythm to the way this guy speaks, haphazard though it might often be. One of the few consistencies is – there is not a lot of nuance. KILL means just that. Whether in a competition, or the court system, or perhaps literally. In America we will win, win, win. At what cost? Well, you tell me. Or perhaps he is already telling – us.

Again, he’s not that complicated.

As the man continues to speak about fake news from our most vetted and fact checked information sources (eg. The New York Times and Washington Post); appoint people who have fought their entire adult lives to dismantle the very government agencies they are now being charged to steward (eg Scott Pruitt EPA, Betsy DeVos Dept. of Education, Rick Perry, Dept of Energy); and stacks his closest inner circle of advisors with white men who, like himself, have ZERO to little experience in governing or foreign affairs (son-in-Law Jared Kushner, charged with achieving peace in the middle east, and the unmentionable former Breitbart “news” chief and avowed Leninist Steve Bannon, who I’ve unfortunately just mentioned, as his top consigliere on EVERYTHING) – we all need to CONTINUALLY ask ourselves.

WHAT. EXACTLY. IS. THIS?

Gotta get it together!

Since the majority among us, certainly among those reading here, are reasonable people, the answer is, once again, as uncomplicated as a Trump speech:

What this in turn means is that we all need to act accordingly:

Do not stop. Call your representatives in Congress. Post on social media. Talk to friends. Go to meetings. Argue with relatives. Take to the streets. This is how the country came into being centuries ago, has continued to flourish through difficult decades, and is the ONLY road for survival. Despite how much our new dictator-in-chief rails against it.

How do I know this is needed? Because these days I even find myself, a life-long liberal, occasionally agreeing with John McCain from the sidelines. Yes, that’s right. The guy who brought us Sarah Palin.

We need a free press. If you want to preserve democracy as you know it you have to preserve a free and adversarial press. That’s how dictators get started.

Sure, he walked back that statement hours later by saying he wasn’t equating Trump with a dictator. But I’m not. I’m in full equating mode. Well okay – perhaps that’s a bit harsh in light of recent court opinions. Let’s just say that at this point – he’s an aspiring dictator.

When I told my husband about what I was writing, he reminded me of the brilliant Susan Sontag’s 1975 essay for the New York Review of Books on the work of Leni Riefenstahl entitled, Fascinating Fascism. In it, she factually and intellectually goes on to debunk and devastate the Nazi chronicler’s attempt to rehabilitate the reality of the extensive period of her life in service to Hitler into a gauzy creative representation of an unfairly marginalized artist who simply shot what she saw.

Let’s hope someone, or more than one, are able to do the same thing en masse with Trump that Sontag did with Leni. And that it sticks.   If history is any indication, this person, or people, will come from what our modern-day American Fuehrer in training likes to most sourly call: THE CROOKED MEDIA. Which, given the reach of global internet platforms these day, is not only the NY Times and the Washington Post but each and every one of us Americans who gives even a whit about democracy and freedoms – not only for ourselves but for all of our non-immigrant, and immigrant, brothers and sisters throughout the world.