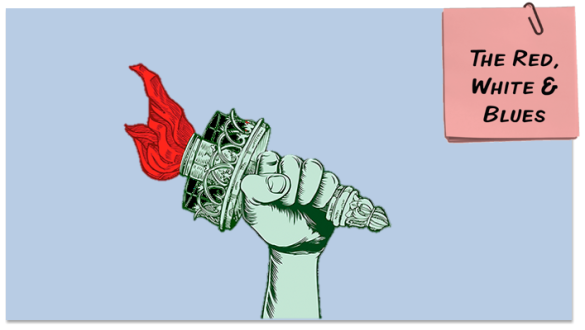 I don’t know about you but I’m beginning to HATE hearing phrases like:

There ARE actions we can all take to create the change we want.

What I find equally annoying are my own bromides. Statements such as:

Just remember, WE ARE THE MAJORITY. There are 2.85 million more voters in this country that DID NOT VOTE FOR TRUMP than DID vote for him.

Please, someone make me – and them – STOP.

It’s not that I don’t believe these to be truisms, along with many others. It’s just that these days I am royally pissed off, scared and sometimes foaming at the mouth (Note: Believe me, folks, it’s true). Mostly, that my country is about to be led by someone who for the last year and a half I’ve considered a racist lunatic and who, with each passing day, makes statements, speeches, tweets and actions that only confirm those feelings tenfold.

It takes a certain kind of person to endure this kind of pressure with a combination of action, dignity and grace. People like Congressman John Lewis (D-GA) who said this week what the majority of us in the country are all thinking – that Trump is not a legitimate president because his election was illegitimate.

There is convincing evidence Russia significantly interfered with the election process, Rep. Lewis explained.   He and others also added that based on conversations with the FBI and others there is also apparently widespread suspicion and isolated pieces of mounting proof that members of Trump’s campaign, and perhaps the candidate himself, were willing and/or active participants in this swindle. 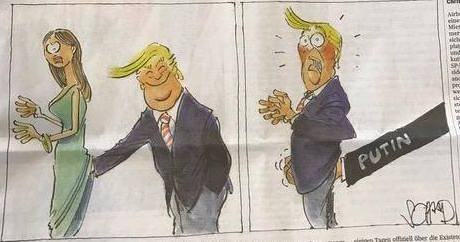 Courtesy of a Zurich based German language newspaper. #nailedit

So for those many reasons, Rep. Lewis then announced he will not attend Trump’s inauguration in less than week. Nor will, following his announcement, a growing list of other members of Congress, who are pressing for an internal and/or external investigation into the election and Trump. One that they will likely get – in detail.

See, that’s exactly how action happens. Unvarnished, calm truths – elucidated by a few facts and plausible theories – followed up with a plan to resist, protest and create the change you want based on those truths.

Of course, Rep. Lewis marched with Dr. Martin Luther King at Selma in the 1960s fighting segregation, got his head beaten in by police, and nearly lost his life doing it. He’s bold, courageous and well trained.

Or as some put it “all talk.” #eyeroll #enough

But what’s the average passive scare-dy cat like me – and perhaps you — to do?

This brings us to INDIVISIBLE: A PRACTICAL GUIDE for RESISTING THE TRUMP AGENDA. 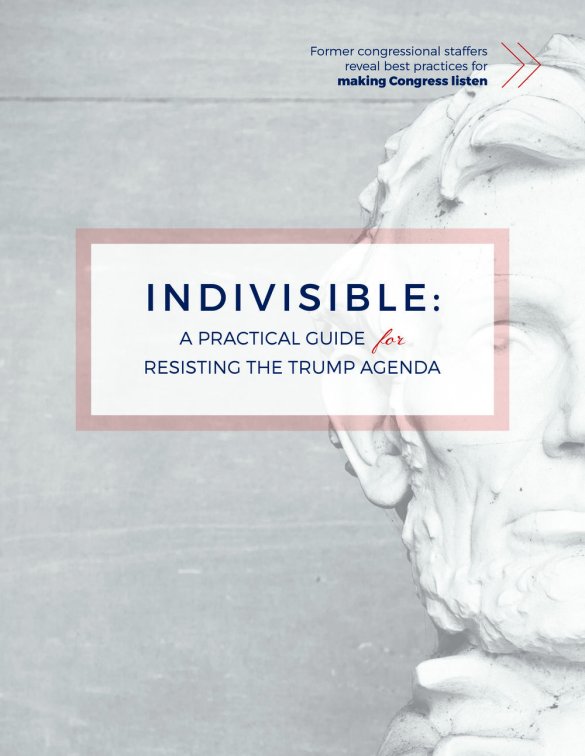 It’s readable, smart and snappy and was written by former congressional staffers who wanted to chart out step-by-step, to us ordinary folks, the best ways to make Congress listen . You can read and/or download the breezy 26 page pamphlet here: indivisibleguide.com.

Think of it as Advocacy/Politics/Change for Dummies.

Indivisible has only been posted a matter of weeks and already there are Indivisible GROUPS springing up all over the country that use the short, printed guide as a jumping off point primer on how to get lawmakers to stop crazy people from hijacking the country you love. 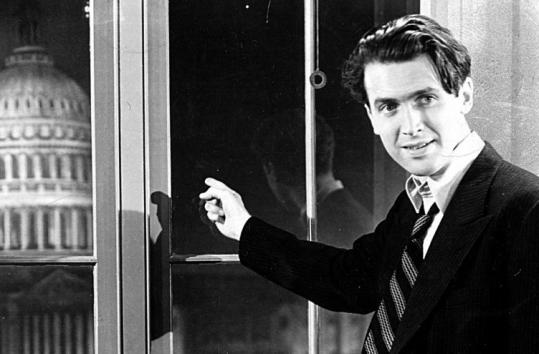 How to become your own version of Mr. Smith

No, I’m not apologizing for my words. I’m speaking to you – not to those who disagree with me or to those on the fence who I want to persuade. I have to be more polite to them to affect change. At least publicly. Which doesn’t mean I can’t be passionate, strong-minded and direct in their presence. Or scream, yell and curse when they’re not around.

See, that’s what I learned at one of the advocacy groups inspired by Indivisible I accidentally attended this weekend. Some weeks before a friend of mine saw one of my feverish political posts (Note: Or rants, or pick your applicable verb) on Facebook and realized my verve had potential but my methods could use some, um…honing (?) to get me to the next level. So he invited me to join him in a Saturday afternoon of “advocacy training” at someone’s house led by a professional.

Right. At first I didn’t want to go even though I realized I should. Then I considered the alternative – more foam. So I decided to join him. And then the day before the event – where I would be required to walk into a room full of all these strangers – my personal news oracle, Rachel Maddow, actually had one of the founders of the Indivisible Guide on her TV show reporting on the very type of event I had unknowingly agreed to attend the following day.

Jees, this sounds so smart, I thought. I should get involved in that but probably won’t. Little did I know I already had committed to do so and was about to.

I say all this not to pat myself on the back to encourage all of you to take a small step out of your comfort zone into unknown territory. You can still foam, or drink, or tune out and do nothing the rest of your time. But if you allow yourself, there is also room to create some sort of active plan to counteract all of your worst (or on some days, best) instincts.

In no particular order, here is some of what I re-learned, learned for the first time, or was astounded by in the course of my training:

— Did you know you get some of the best results talking to your member of Congress? They (okay, their office) will answer ALL constituent calls and log them. But be precise and direct. This is far more effective than emails or other correspondence, which are largely ignored.   And their local phone numbers are easily found on the web. 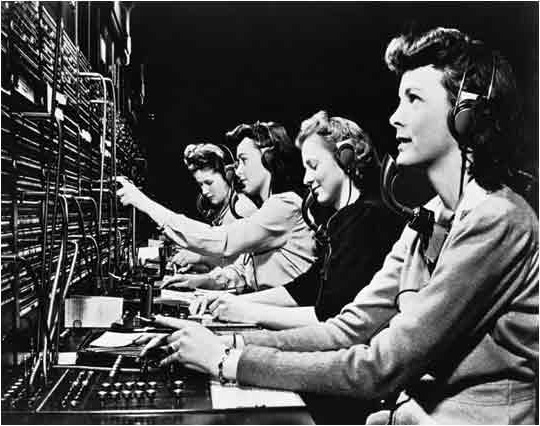 — ASK for a staffer in your rep’s office that handles the issue you are calling about.   These people are almost as important as your rep because they write all the legislation and do the grunt work. Also, ask for the scheduler in the office and when you’re ready you can get a meeting on the books with the staffer and eventually the rep. Go with up to four people, armed with a personal story on your “issue.” Prepare a few thoughts, facts and questions. Know your rep’s stance. But remember, you don’t have to be an expert. It’s more about forging an ongoing relationship with them on an issue(s) you care about. And note: NEVER mention you contributed money to their campaign. That sounds like you want quid pro quo. It’s much more powerful to be a constituent with friends in their district because that means you can en masse vote them out of office.

— If your rep AGREES with all your positions CALL THEM ANYWAY. They need to know you have their back and can use your ideas. In fact, they welcome it, particularly now when the going is tough. Also, attend any town halls they have in your district. You can find these out signing up for their newsletters. 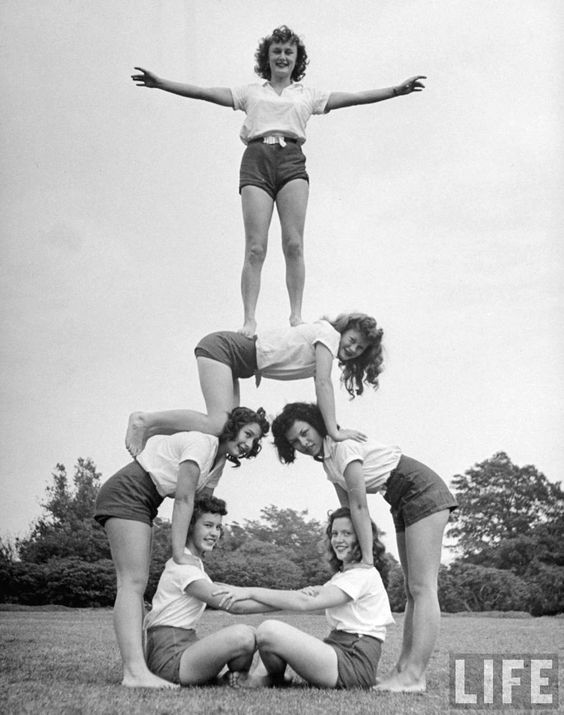 Be part of the political human pyramid!

— If you go to sites like majorityleader.gov or senate.gov you will get a calendar for a FULL YEAR that will tell you when you rep (actually, all of them) will be in your district and state and when they will be in Washington, DC working. Schedule calls and meetings accordingly. You can also go to congress.gov and check on what bills are in what committees and on which subjects.  Check out committees your specific rep is on and contact them about the issue.

— Become part of a local organization fighting for your cause because there is more strength in numbers. This doesn’t mean you turn your life over. You go to an event or two and do what you can in the beginning. Here are some sources and ideas:

Common Cause — I am particularly interested in investigating Trump and the election. This group is on the case and effective in holding elected officials accountable. They are also BI-PARTISAN. Commoncause.org

Citizen’s Climate Lobby – An effective group if you are particularly concerned with climate change. Citizensclimatelobby.org 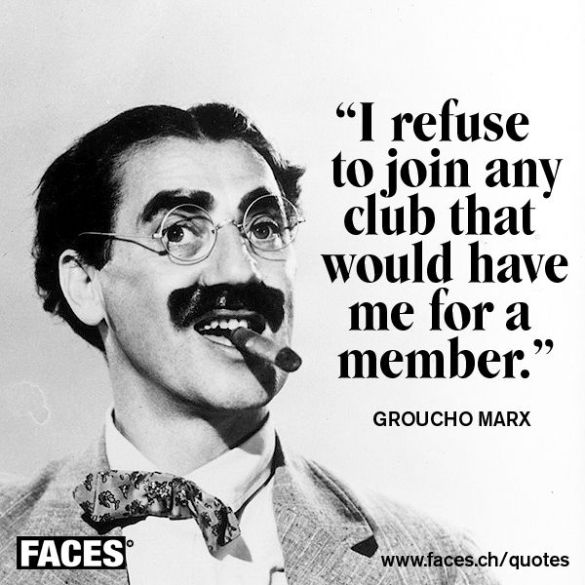 Funny, but missing the point 😉

— If you are a white person who is particularly concerned with racism towards non-whites try White People For Black Lives.

— If you want a simple task to do everyday that will make some difference join the group Rise When We Fall. They offer options and action plans. You can also get daily emails from them. Risewhenwefall.org

— Sign up for a google news alert about the activities or any Congress member of issue you want to know about. You can choose how often you get them. It’s a summary of the latest developments and a way to stay informed.

— If you want to take a step towards a Trump impeachment, demand your reps and others support a bi-partisan independent investigation into Russian/Trump activities in the 2016 presidential election. If there is an investigation done solely within the Senate, a distinct possibility, Republican Majority Leader Mitch McConnell has the power to keep specific evidence, testimony and findings secret and you will NEVER KNOW the FULL STORY.

— If you are overwhelmed with issues and can’t choose one, you are not alone. Know most of us feel this way. Go to charity navigator and peruse many worthy causes. It is a guide on what organizations do and how to donate time or money. Spend some personal time soul searching and realize you cannot do it all. And that whatever you don’t choose, someone else somewhere will choose.

When it feels like this… remember you are not alone!

Finally, the woman who ran our workshop wisely pointed out that although often it’s quoted that all politics are local, what that really means is all politics is personal. She then hesitatingly offered us the quote often attributed to Russian leader Joseph Stalin (Note: Appropriate in the age of Trump) – the death of one person is a tragedy; the death of one million is a statistic.

Meaning –- this stuff is all personal and if you relate what is meaningful to you and yours it will carry more weight than you realize.

Though if Russian orthodoxy makes you uncomfortable at this point in time – and why wouldn’t it – think instead about what Mother Theresa once said:

If I look at the mass I will never act.

And then, yeah, act. Which in turn might bring you, just a little bit of hope.