There is a lot being written about television and movies these days. Did you know this is the golden age of TV? It’s true and if I hear myself or anyone else say it one more time I’m gonna puke. This is because there are so many TV series and special programming events that it has all become inconsumable in any reasonable amount of time to keep up without spoilers from social media and well-meaning friends.

But like cmon Chair, don’t you want to know who Barb is? #poorbarb #leggomyeggo

As for films – there IS time to see all the great ones every year but not enough of us are willing to leave our homes to do so. Though when we do we’re usually happy we did. Except often it’s equally satisfying to wait and experience them on your own time. Or borrow someone else’s screeners. (Or, eventually, their Netflix password.) Be honest.

I’ll get to you Alicia and Michael #alreadyweeping

THEATRE, however, requires movement, thought and the ability to leave your home or tablet and actually be somewhere else to watch something on someone else’s time. It also requires you to pay more and be plopped into an even larger room of people you don’t know. But when you do, and it works, there is nothing like it. The immediacy. The danger of something going horribly wrong – or wonderfully right. In fact, on stage they can sometimes be one in the same. And as an audience member you are guaranteed that exact moment you’ve just witnessed will never happen in that very same way ANYWHERE else again. Ever. And you thought you didn’t have the chance to experience anything unique or special anymore.

I’ve been fortunate to have a very short weekend in NYC this Labor Day holiday where the significant spouse and I managed to squeeze in FOUR Broadway shows in less than 48 hours. Yes, you read that right. That’s what you do on a yearly trip here. Or any trip here for that matter (Note: Don’t write in about museums, restaurants, concerts and friends). And even if you can’t get to NYC to do it, every one of these four shows will be doing multi-city national tours within the next year. So you MUST go see at least one of them, no matter what your mood and finances are. (Note: There are BIG discount tickets available everywhere – check online).

WHY you may ask?

Because experiencing a work of art live with others will make you feel less alone. Because at least one of the four will speak to you in a significant way. And because, for a very short time, you will be part of something larger than yourself. Of course, you (we) always are. But it’s so easy to deny that in everyday life. Am I saying theatre is like religion?   Uh, no, not all. It’s be(tt..)… Right, okay, let’s not go there.

Instead – here are this weekend’s BIG FOUR. No, Tony award-darling, hottest ticket in town Hamilton is not among them because we weren’t going to fork over the $500-$1000 per ticket the scalpers were asking. Yes, 99% of my friends tell me it’s brilliantly done. But guess what – it’s not the only game in town on Broadway. Or in your town. And besides, it will eventually play there too in the next year or so.

Come to the Fun Home!

This is a memory musical piece played in-the-round and as told by the fictional version of cartoonist Allison Bechdel. She was the author brave enough to some years ago write an acclaimed graphic novel of the same name that recounted the story of her coming out as a lesbian along with the story of her closeted gay father and his eventual suicide. If that sounds depressing – or an impossible subject for a musical – it is neither. Quite the opposite and then some. This is yet another reason why one has to – sometimes – leave one’s house.

Alison Bechdel… creator of the Bechdel test (google it)

The creative team of Fun Home have recreated a seemingly bizarre family coming-of -age tale that they have somehow made universal and..well… mainstream. As I wrote to a friend, who is a friend of the author – because I just couldn’t contain myself – every moment seemed to land exactly right. The loneliness and isolation we all feel from time to time growing up; the inability to understand the drama happening right under your nose; searching years later as an adult (or even worse as an adult writer) for a way to piece together moments of your past that no one else wants to remember or claims they can remember; coming out to the world fully as yourself – whether you are gay or straight; and somehow taking all of these experiences and moving on with your life – or, if you’re a writer, trying to make your life into art.

Of course, this description sells the show terribly short. Let’s just say, I’m Changing My Major to Joan. Which you will understand immediately after you see it. 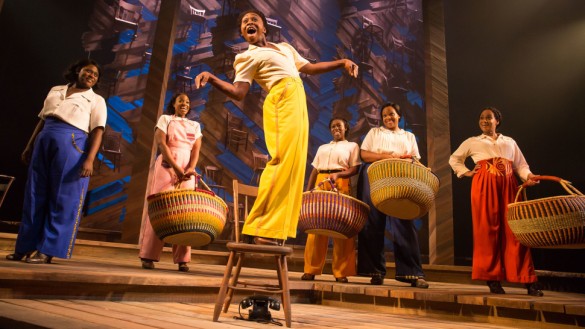 Yes, the musical was first on Broadway 11 years ago. And it was in 1982 that Alice Walker’s seminal book was first published. Not to mention Steven Spielberg directed a movie version in 1985 that’s been on TV nine zillion times.

You know… the one with this lady

Which is the very reason to buy tickets to THIS Broadway production or see it on its inevitable tour. The story has never quite been told this way. The walls of the set are merely walls lined with chairs that are the show’s primary props – along with lighting and fabric. These are among the only few physical objects that retell the abuse, emergence and, sure, triumphant moments of ONE young Black woman born into what seems like the most impossibly awful circumstances in the post, post-Civil War South.

Yet to watch Cynthia Erivo emerge as a full fledged Broadway star playing the aforementioned woman (aka Miss Celie) or enjoy the gospel singing and acting chops of Heather Headley and the rest of the cast is not the point, thrilling as it may be. What is overwhelming is the simplicity of spirit and execution here that infuses the show with an electricity that allows it to become a bit larger than the life it explores. Actually, quite a lot larger – which is what happens when a big Broadway musical is done exactly right.

THE CURIOUS INCIDENT OF THE DOG IN THE NIGHTTIME

Do you want to see a play about an autistic British teenager who is investigating the murder of a dead dog who you see on stage for the first five minutes of the play – a kid who almost never stops talking and occasionally screams a lot? Oh yeah, you do. You REALLY, REALLY do.

You won’t regret it Liz

Producers like turning award-winning books into all kinds of films, TV shows and sometimes even plays. But how do you take the internal, seemingly locked, limited world of this boy and make it even vaguely visual, logical or somewhat…interesting (?)…. to the very average minds of all the rest of us?

Brilliant directing, acting and writing helps. But that’s not enough. The conception of the entire piece might not have been possible a few decades ago before technology allowed us to see things on the stage and large/small screens that we had never seen before. Computer-generated effects of all kinds have taken us into worlds we couldn’t have imagined. Still, someone has to imagine those worlds. A machine can’t do that itself – yet – and it only helped do it here. A whole group of other artists created a universe that the writer wrote, the teenager experienced and the tech people facilitate. Now THAT’S progress. You’ll understand when you go out and see it for yourself. And then you will only begin to understand just how strange and unaverage the world we all live in really is to an outsider.

AN AMERICAN IN PARIS

Have you ever watched an MGM movie musical and longed for it to come to life before your eyes? No really – you get to see the dancing, the singing, the colors, the costumes and the sentiment – or lack of it – as if it’s been pinched from out of a revival house, memorabilia store or perfectly etched museum-grade postcard.

The Broadway and future touring productions of An American In Paris is nothing more or less than that. Yes, adult men and women can indeed do ballet, jazz and Broadway moves while they belt out Gershwin songs in REAL (as opposed to reel) TIME. There are no five, six, seven or eight takes – or cuts between scenes – or close-ups with glam lighting the way they did it in the old days. I kept asking myself, why aren’t these people sweating and panting? How do you hit a note or not miss a cue when you are clearly not Gene Kelly or Leslie Caron and don’t have the luxury of NOT being compared to them?? 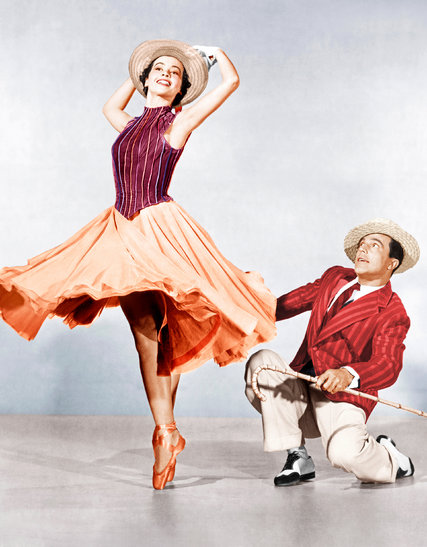 No, this is not the cast of the film. Nor do they pretend to be. (Note: Okay, maybe a little). Still, it’s not nostalgia so much as it’s a live action REinterpretation of a time long gone. It is escapist, sure – but sometimes, well…don’t you want to NOT think about yourself or The Orange Clown for at least three hours?

Cause it’ll cost you (and US) a lot more to stay inside and keep thinking those same dismal thoughts in the long run – you can trust me on that.