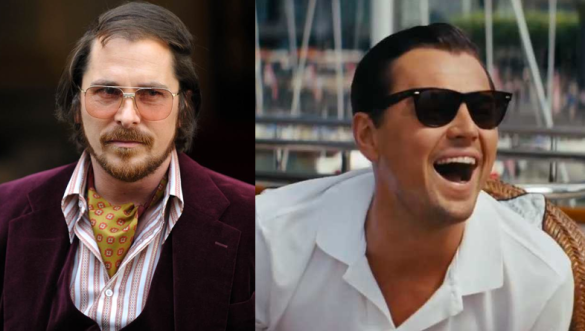 If the guys I went to school with were movie characters they would be Jordan Belfort of Wolf of Wall Street and Irving Rosenfeld of American Hustle.  Two smart, charismatic and fast-talking Jewish guys from Queens, NY with morally questionable values, especially where money is concerned.  A stereotype, you say?  Uh, not when you consider how many Jewish male lead characters there have ever been in big major studio movies aside from Tevye in Fiddler on the Roof.  And besides — what major film studio heroes aren’t a bit, um…iconic.  In fact, those of us who are or could have been them prefer the word iconic.  Especially if it means – we’re the LEAD!

The truth is – you gotta start somewhere.

Martin Scorsese has spent half of his career immortalizing similar types of New York Italian guys in the movies but they are usually in the more tough talking form of Manhattan street thugs in Mean Streets, Taxi Driver, Raging Bull and Goodfellas – men who were certainly charismatic and street-wise but, on the whole, a lot tougher and muscular.  Plus, they could at least duck into Church for confession when things got dicey rather than eat themselves up from the inside out over anxiety.

Those kind of leading men tend to bleed into the aforementioned characters in our current crop of awards contenders.  Also, Joseph Gordon-Levitt’s wife-beater clad muscle head in Don Jon; Bradley Cooper’s co-lead detective Richie DiMaso in American Hustle; or even anti-hero Pat Solitano in last year’s Silver Linings Playbook.  Not to mention all the leads in The Godfather and Moonstruck. 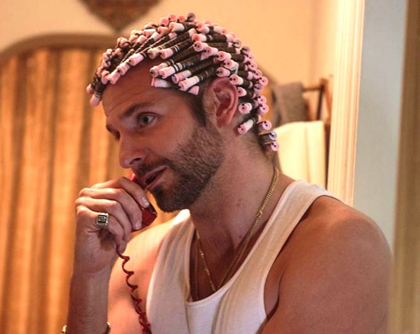 There’s gotta be an award out there for these curlers…

Which means if you put all the current Italian and Semitic boys from the boroughs together – which often happens in real life, not to mention in my own personal one – they comprise what I think of as a new ethnic stereotype I and my many childhood compadres from Queens have long awaited to be included on in film: The Jewish Guido.

(Note: See I can say that because I am one of them…well, sort of).

Who are we?  We are everything and more of what the major Hollywood studios think of as colorful and morally questionable.  No, we are not a Woody Allen character or Roberto Benigni from Life Is Beautiful. 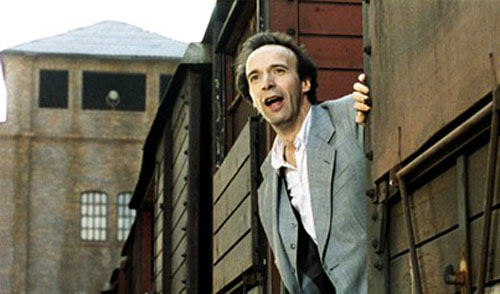 Nope, not this Guido

We are a much more down and dirty, messy type of working/middle class person – a little crass, not afraid to speak our minds and, to put it bluntly: pretty good in bed – which is why we’re often a romantic lead who gets the girl at some point even if we can’t keep her.  You might not want to have us at a fancy dinner party or as your permanent spouse (Note: the latter is still in flux and debatable) but you most certainly want to include us if you aspire to learn how to rise up in the ranks of life or enjoy some unbridled, down and dirty fun.  In short, we have dreams and we’re not afraid to go for them in quite unorthodox and entertaining ways – even if there are overwhelming odds of failure or the likelihood that we will not have the best decorating sense once we achieve those dreams and have the cash to acquire whatever nouveau riche items you or we may crave.  Our reasoning:  if we don’t take that chance we’ll be stuck in Queens forever and, as we all know, with the right amount of money we can hire all the Waspy female decorators we want with taste and eventually charm them into at least having an affair with us after they’re done hanging the drapes.

Okay, so I may have exaggerated just a little bit.  But so are our personas.

This all started several weeks ago when I found myself thoroughly enjoying both    WoWS and AH while many of my friends insisted they reeked of disappointment, misguided storytelling and just plain unsympathetic, despicable characters.  Really?  I hadn’t noticed.  Isn’t this sort of the scrappy, exaggerated way Waspy movie characters behave, albeit with less money and more curse words?  No, claimed my Jewish guy friends from upstate New York, southern California and the Midwest.  They’re just awful people in uninvolving movies.   And those Waspy characters you are referring to are usually the villains, not the hero. 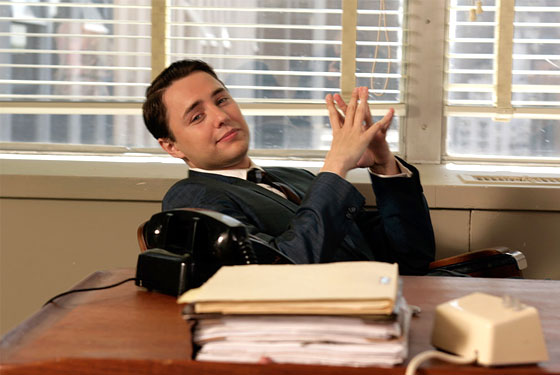 Did someone say Wasp?

Well, okay.  Still, there is something to be said for seeing a version of you onscreen, even if it is a slightly unpleasant one.  If there is enough humanity and humor in the characterization you can get away with a lot of political incorrectness.  Enough elements of truth can counterbalance harsh generalities about the neighborhood or plot holes that you can drive a Miata through.  In addition, if you give these guys a little bit more of the macho power you craved when you were younger, or even last week, the fantasy is complete.  At least for some of us.

I can’t say I’m particularly proud of two Jewish guys from Queens being portrayed as people who swindled others out of money in order to lift themselves out of the doldrums of their own lower/middle class existences (Note: though if I had a choice I’d take the fictionalized Rosenfeld in American Hustle, who mostly stole from rich bad guys and didn’t kill people or cause them to kill themselves).  But now that Dustin Hoffman and Richard Dreyfuss are no longer leading men and only act sporadically, not to mention the total lack of movie roles for Steve Guttenberg in the last 20 years, you can’t blame me for binging a little on these types of recent and very public inroads. (Note: Yes there is still Jessie Eisenberg, born in Queens and raised in New Jersey – but c’mon, there is just nothing boroughs about him or any of his characters). 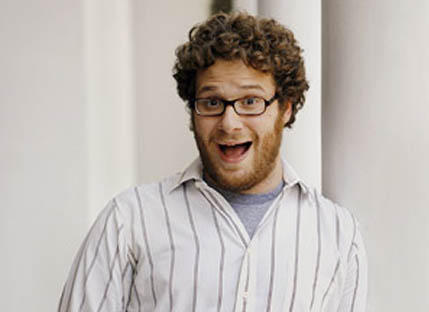 I made a movie with Barbra.. does that count?

My notesfromachair co-hort Holly Van Buren suggested to me that the emergence of the Jewish Guido might have something to do with our current economic climate and the fantasy of the everyday working class man with the accent becoming victorious.  Not a bad thought.  It’s the boroughs way and certainly is a fine counterpoint to the seemingly omnipotent top 1%.  I mean, it takes a little bit of the crude and in your face in order to cut through all of that upper crust steeliness, right?

Plus, both Wolf and Hustle are period pieces from the seventies and eighties.  Clearly, enough time has passed where rather than championing a Gordon Gekko kind of financial wizard we can indulge in a more in-your-face punk upstart who beats the elite at their own game by any means necessary using the logic gleaned from a tougher life lived.

Still, there seems an even bigger factor – time.  American society may have grown more polarized these days but certainly its people have overall become far less homogenized.  There is ethnicity everywhere – so much so that is unusual for a day to go by on Fox News or right wing radio where the previously dominant White Male patriarchy, particularly in the south and Midwest, don’t wax nostalgic about the good old days and whine about losing their grip on power and the social and moral traditions (Note: one questions what they consider those were) that once made our Great Country great. This and the fact that same country, which less than two centuries ago legally enslaved all of its African American citizens in more than half of its states, has for the last six years had its first African American president presiding over everyone.

Yep.. and still the President.

Those factors of time and ethnicity might also be responsible for the emergence of two other crossover major studio films about the African American community this year – 12 Years A Slave and Lee Daniel’s The Butler.  It is certainly no coincidence that as directors and other artists emerge in a position of power – like Steve McQueen and Mr. Daniels – the more chances there are of movies that reflect the history and/or experiences of their particular ethnic groups.  (Note:  Not that they can’t do anything else – both men have worked on “white” films).  It is also no accident that both of these directors have also earned money and acclaim in their recent past that have enabled them to do larger and more mainstream films with African American characters in the leads.  This is just the way it goes as long you can produce massive income with your often larger than life product.  Decades before Spike Lee had a certain degree of power among the major studios until his movies began underperforming at the box-office and the cache he was given by the powers-that-be to make his type of movies began to shrink. (Note: Mr. Lee also came of age at a time where there were far less non-white leads in films than there are today, making his road somewhat tougher).

Interestingly enough, all four aforementioned major films this year – Wolf of Wall Street, American Hustle, 12 Years a Slave and Lee Daniels’ The Butler – are also historical pieces that take place far and very much farther into the past.   There could simply be a certain drama to looking at events from a backwards lens.  Though surely it also provides a special kind of safety that gives the Hollywood community and its studio system a specific type of perfect cover. 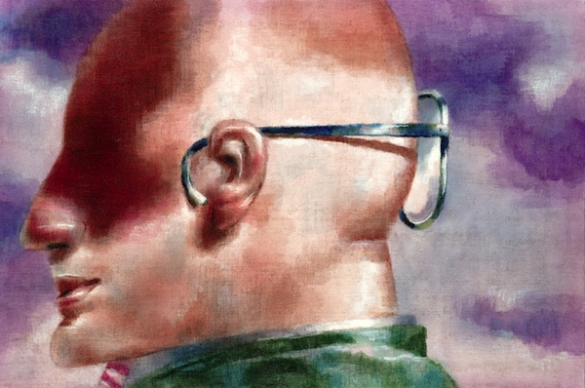 the current state of Hollywood

Which all begs the question – why with all of the many, many male Jewish writers and directors working in the movie industry over the decades – not to mention that the studios themselves were founded by a large group of New York Jewish salesmen – have there statistically been such a lack of Jewish male characters as major studio leads on the big screen. I mean, if the African-American model holds, shouldn’t it follow that….?

Well, I have no provable idea.  But even in accounting for time and some evolution of thought, it is still worth noting that American Hustle’s David O. Russell is half-Jewish while Wolf of Wall Street’s Scorsese is very famously Italian.  So, at least in terms of the Jewish Guido, well — you do the math.

Or, to put my take on the whole thing another way, here is what Woody Allen’s quintessentially non-Guido/very Jewish character of Alvy Singer said when he first met his very ethnic-looking first wife Allison Portchnik (Carol Kane) in the 1977 classic, Annie Hall:

Alvy: You, you, you’re like New York, Jewish, left-wing, liberal, intellectual, Central Park West, Brandeis University, the socialist summer camps and the father with the Ben Shahn drawings…and the really, y’know, strike-oriented kind of, red diaper…stop me before I make a complete imbecile of myself

Allison: No, that was wonderful. I love being reduced to a cultural stereotype.

2 thoughts on “The Jewish Guido”