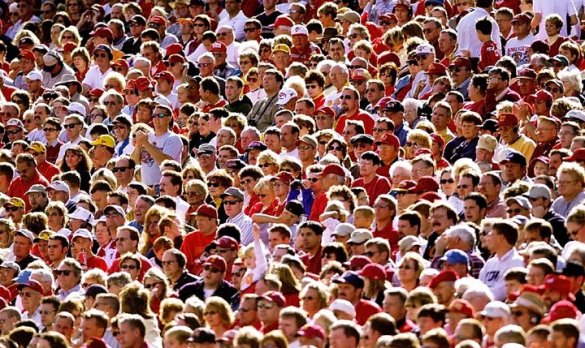 Do I matter?  Have I mattered – really mattered?  Meaning, have I, or anything I’ve done, made any difference in the world?

It’s easy to view true achievement in terms of grand accomplishments when you measure it by today’s world standards.  You know what I mean – people like Nelson Mandela, Oprah (no last name needed), Steven Spielberg, JK Rowling, Sting, Barack Obama, Kobe Bryant, Mario Batali and Brangelina.  Or perhaps even Paris Hilton and the entire Kardashian/Kanye family, if that is what appeals to you.  Our culture elevates celebrity, reasoning those who have gained lots money and notoriety for actions in their chosen fields have made their mark on the world and those of us who don’t have those things have not — or else we too would have been so richly rewarded.

This, however, misses the point of both achievement and existence. Entirely.

Nevertheless, it is the entire point of Frank Capra’s classic film It’s a Wonderful Life. Circumstances conspire to trap Life’s plain spoken hero George Bailey in his two-bit town with a two-bit life and, in desperation, George decides to jump off the local bridge to commit what will surely turn out to be a two-bit suicide.  But this being a movie in 1946 and not 2013 where a superhero would surely have intervened, George is rescued before he can drown by an “angel” in training seeking his “wings.”  This angel, a sort of befuddled, non-descript older guy who is clearly not, nor ever has been, a Mandela, or even a Kanye, determines the only way to prove to George that his life has made any difference at all is to literally show him what his world would look like if he hadn’t existed. 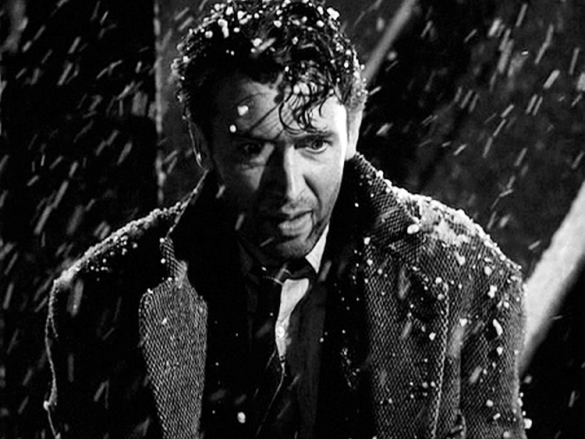 The face of desperation

Although it was dubbed “Capra-corn” in its day, there is a reason this movie has survived for nearly 70 years and is shown on television every Christmas Eve like clockwork.   It enables us to see ultimately that all the crappy little lives we might believe we’re living in our darkest hours are in their best moments really as expansive and meaningful as some of the greatest thinkers, artists and saintly people – those humans we today call CELEBRITIES – of our generation.  And perhaps even more so.

OKAY, that’s a nice thought, but a total movie contrivance – and just an excuse for you, Chair, to justify your own measly little life – you might say.    Fine – then let’s leave my life out of the equation.  Let’s look at a moment this week in the life of a plain spoken 53 year old bookkeeper in Decatur, Georgia named Antoinette Tuff – who through a 20 minute conversation with one very sad and troubled young man managed to alter the lives of not only hundreds of others in the elementary school where she worked, but perhaps millions of people who listened to, read about and observed what she did when she single-handedly talked a mentally disturbed individual out of the mass slaughter of children and adults who worked at the school.    And who also, through her off-the-cuff actions, countered the decades old argument of the National Rifle Association that the only way to stop a bad guy with a gun is with a good guy with a gun.

Uh, not so much.  Understanding and love were Ms. Tuff’s weapons (Capra-corny as that might seem) and they proved far more effective than the many rounds of bullets a young man named Michael Brandon Hill held and ultimately chose NOT to use when Ms. Tuff was done relating and listening to him.

Just as George Bailey saw that the comfortable homes he helped regular customers like him obtain, through the generosity of the two-bit Savings and Loan Bank, turn into a shanty town of crumbling, repossessed shacks had he not existed (not to mention his happy friends and family becoming lonely alcoholics, general ne’er-do-wells and antisocial, isolated depressives), Antoinette Tuff’s real life story shows us the fictional life lesson given to George Bailey in a 70 year old film is no mere fluke.  Simply sharing yourself with others when you are forced to do so by seemingly supernatural or at least unnatural circumstances, can save more people than you ever intended.  And in ways you can never know since, unlike George, we have no way to tell what would or would not have happened had we not done so. 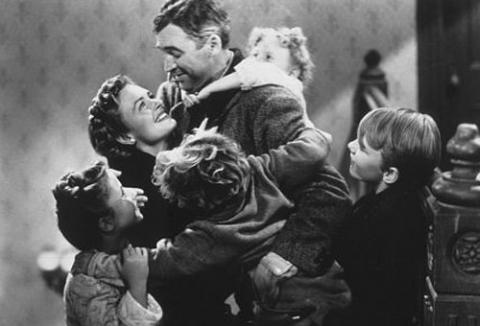 It’s OK to believe to in happy endings!

By merely telling young Mr. Hill that everyone goes through bad times, by confessing to him she herself was so distraught she tried to kill herself last year when her husband of 33 years left her (and her disabled son), and by taking the chance to assure a mentally ill man that he didn’t have to die despite having already firing some shots, and that she loved him and would stand by him and help him give himself up, Antoinette Tuff saved the lives of hundreds and the pain of thousands with merely the simplest of actions.  She also managed to show basic compassion and understanding to a potential killer in society by knowing in her soul that he was not merely just a mentally sick person who society had turned its back on and left to rot.   One act of kindness to one seriously deranged mind – one moment of understanding – can prevent carnage of unimaginable (or perhaps even imaginable, which is too bad) proportions.  It’s a scene so trite that it probably wouldn’t make the cut of a 2013 after school special – if such programming even existed in our current evolution of entertainment offerings.

We all just need a lifeline…

None of this is to take anything away from Ms. Tuff’s extraordinary presence of mind or, on the other end, the achievements of a Mandela, a Rowling or even a Brangelina.  But contributing to the world comes in all sorts of sizes and iterations and who is to say who or what is more valuable or more meaningful.

It is admittedly difficult to feel at all relevant in a world where one’s worth is often measured by the number of followers on Twitter and Facebook or the size of one’s house, bank account or wardrobe.  Like – really difficult.  But every once in a while someone like Ms. Tuff comes along to show us all of the rest of that stuff is really, when it comes down to it, a whole lot of bullshit.

Hey, I want attention as much as anyone else – why else decide to become a blogging Chair with a bright red logo?  On the other hand, I also periodically return to something I once heard Oprah – our current (and perhaps forever) reigning Queen of Celebrity – say:  More than anything, everybody just wants to be heard.

I am Chairy.. hear me roar!

That means not just me, or you, but everyone.  It’s one of the reasons I became a writer and I love education.  It enables us to share stories.  So often I find students in painful situations (akin to ones that I have been in) where no one was there – rejection of professional work, personal relationships and family dysfunction, all engendering useless emotions of alienation, self-doubt, and even self-hate.

How do you navigate these?  One way is to know you are not alone.  Another way is to learn what people who came before you did and how they survived.

Reading Julia Cameron’s The Artist’s Way helped me enormously.  So did an interview I once did as a reporter with director/writer James L. Brooks, who asked me about my writing aspirations and was encouraging.  So did once meeting Oscar-winning screenwriter Bo Goldman at a social occasion early in my career where he urged me, a tortured unknown in my twenties, to be kinder to myself and to not force it.  The words will come when they come.

Add to that the words a fellow writer told me that Stephen Sondheim once said to a mutual friend – a Tony Award winning actress who was rehearsing one of his new musicals for Broadway –  “If you are not having a good time there is no point in doing this.”

Gray skies are gonna clear up

The most significant act of compassion you can do is reveal yourself to another person.  Share something other than, well, money.  Share a part of who YOU are.  Share your pain, or love or happiness or encouragement.  My partner of 25 years volunteers with the Trevor Project and every so often a troubled young LGBTQ caller asks him about his life.  It is amazing to hear the reaction through the phone when he answers their question about his relationship status and he shares he has been with someone for 25 years.  A gay guy??  I can’t imagine how hearing that would have changed my life in my teenage years.  Or even early twenties.   And yet here I am a member of that relationship thanks, in large part, to the support I had in many different areas of my life from others.

It’s all interconnected and relevant and, most of all, MEANINGFUL.  Antoinette Tuff proved this to the mentally ill 20-year-old young man in Georgia who had an assault style weapon and 600 rounds of ammunition.  A lot has been made of the fact that Ms. Tuff is African American and the shooter is white.  If the shooter had been black would a white person have been so willing to open up??  Who knows.  And really, who cares.

This misses the point, or at least clouds it.  There is a universal example of humanity that transcends race – a sense of being listened to by someone and not ignored or marginalized.  To truly hear and really see a person is powerful stuff – for both parties.  And it cuts across race, gender, sexual preference and age.  It is, in essence, who we ALL are.

If you believe that our culture, most specifically movies, are a reflection of our current humanity, in an odd way this brings us back to It’s A Wonderful Life and George Bailey. People often ask the question, What is missing from movies today?   Perhaps it’s this – that simple shared experience of humanity told in elegant or perhaps inelegant ways.  Spectacle is important.  But what is more spectacular than being who you are in a simple human way and sharing it with the world?  Perhaps it’s time to review our definition of the spectacular.  It’s often touted that bigger is better.  But Antoinette Tuff makes one wonder whether this is a bill of goods we’ve all just been sold and it isn’t true at all.

I mean, does it really matter whether or not Ben Affleck is the best choice for Batman or even the fact that there is or isn’t a Batman/Superman sequel at all?  Big as that story was this week, it’s a lot, lot smaller than any one of our lives.