My response when people tell me I’m going to hell:

Oh good, cause that’s where all my friends will be!

It’s kind of a tart, easy answer that ensures I won’t win any new buds in certain circles, but those are not circles I want to be in anyway so these kinds of answers work for me.  Plus, as a lifelong provocateur with a big mouth, especially when I’m pushed, I actually love annoying those who in my mind are a little too self-righteous and judgmental about the rest of us.  Hmm, I guess that means anyone like me – except on the other side.

This all got me thinking about Lena Dunham and Girls, James Franco in Oz the Great and Powerful and Don Draper/Jon Hamm (because they are now the same person) in Mad Men, as well as Hannibal Lecter, Dexter and pretty much any role Al Pacino has ever played.

What is it about devils and devilish behavior?   And what puts them and the way they act in that category?  Why are there some devils we love to love?  And other Lucifers we fear and hate?  And still other Beast Masters we are kind of intrigued by and want to spend time with yet publicly want to deny, or at least distance ourselves from until the doors are closed and we can luxuriate in all of their nastily seductive, id-like, primally deceptive dirtiness?

Woah, excuse me while I don’t wash up.  Ever.

I happen to love Lena Dunham – everything about her – which is why I don’t really want to meet her and be friends with her.  Decades of experience tell me I will be severely disappointed because she can never live up to the hype.  NO human could.  Which is why I suppose I’m looking forward to Hell.

In any event, this is because Lena Dunham is NOT Hannah Horvath, the oft-vilified lead character on Girls just as three decades ago Murphy Brown, from the self-titled TV series, was not a real person anyone could feel threatened by despite then Vice President Dan Quayle’s hysterical reaction to her.

However, this did not stop the zeitgeist from attacking and defending Murphy Brown, dubbed by Mr. Quayle et al as a scandalous role model of single motherhood for young women and the future of the American family in the 1980s, just as me writing and ranting about my love for Lena/Hannah likely won’t now quash the outcry against her.  Outcries such as the LA Times’ TV critic Mary McNamara who recently wrote that Hannah was a “lovely but irritating wild child running around the playground shouting vagina at everyone and peeing in the sandbox.”  Okay – I suppose she’s entitled.  But when she suggested that “someone needed to put that kids’ clothes back on and show her where the bathroom is,” I suddenly had the overwhelming urge to make the short drive down to her office (hopefully in the middle of the newsroom) and take a dump on her desk in support of my current favorite TV heroine.

That’s it Hannah, ignore the haters!

The latter is not only because I am a bit Satanic but because I love that Dunham is representing being a writer in your twenties with seemingly unedited indulgence (Um, yes, she’s edited – Judd Appatow is one of her producer’s for God’s sake!).  And THIS is because I am here to tell you that for most writers and many others in their 20s (and obviously sometimes beyond) it’s about always thinking you’re right and usually not caring enough if you’re not to stop your behavior.  That’s the brilliance of the show and why it and Dunham’s Hannah is so cringingly uncomfortable when she plays ping pong topless with her flab bouncing; leaves nasty messages for friends not listening for the millionth time to one of her problems; and tries to manipulate everyone around her for a free ride with money or attention so she can create something brilliant that the world must have and see for its own survival.

I mean, I certainly feel and have felt that way.  Who hasn’t?

Okay, well then let’s just say I have felt (sometimes feel?) that way and don’t find any of those traits particularly objectionable, unsympathetic or devilish for what now should be obvious reasons.  Though perhaps, you do.  The devil, as they say, is always in the details.

Still, the dramatic strategy used for Hannah is be all out in all of your flaws and don’t worry about being sympathetic if you can also be honest and entertaining.

Well, then – what about the charm of other blasphemes? Like: 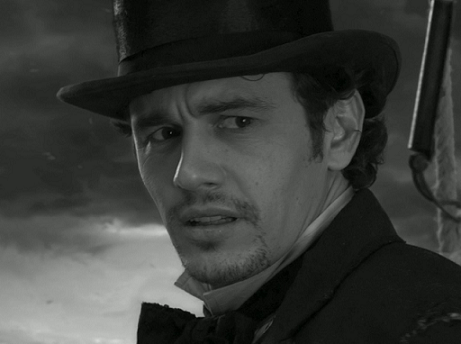 A look behind the curtain

James Franco’s version of the title character in Oz, the Great and Powerful

Here’s a two-bit circus magician whose goal through his movie is to become rich and powerful and famous while bedding as many unsuspecting women along the way as possible.  These are lofty goals to some but obnoxious ambitions to many others.  Yet members of both groups have pushed the movie to over $300,000,000 at the worldwide box office in just a few weeks.

Oz was helped by being a prequel to an iconic movie seen by more people in the world than any other.  But it also has a fairly unsympathetic lead who gets by mostly on counter charm and the goodness of others who want to believe and will inevitably be disappointed by him — until they’re not and in turn lead him to forever change for the better.

Dramatic strategy: We’ll root for the Devil in all his sin because he’s fun and underneath it not so bad.  And since he’s a famous character, we know he will come around in the end.

Still, this will not convince everyone.  As one of my students said to me, “Franco seemed stoned through the whole movie, do you think he was?  And why do I want to watch that, anyway? “

I had no answer for either. 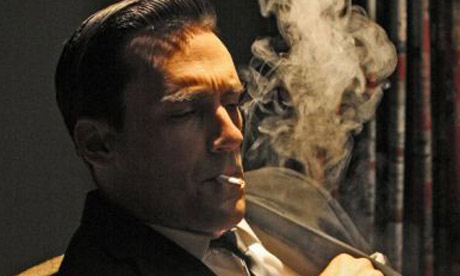 He’s an ad man who manipulates the public for profit, stole the identity of the dead soldier next to him, is a serial adulterer (until perhaps recently – though we don’t know for sure), a chain smoker and a disrespectful lout if someone gets in his way.  He is also always the best-looking and best dressed guy in the room, a brilliant ad man, a loyal friend, and the guy every guy wants to be and every woman wants to have – partially because he is rumored to be the best lay in New York City in the sixties, which is really saying something.

Dramatic strategy:  Incredible looking devils who will maybe move a mountain for a lost puppy, if they decide they’re worth it, can do anything else they want as long as they give us a wink and a nod.  You know it’s true.  I know it’s true.  Why fight it?  In real life or on television.

If Dexter were writing this (and perhaps he is) he would offer no justification for being a serial killer who has gotten away with countless murders while sacrificing the lives of his wife, girlfriends and friends plus the sanity of his police detective sister.  Everything about him is beastly, especially his choice to maintain a double life as a caring father to his young son and expose him to all kinds of potential bloodiness.

Having watched every episode of Dexter, I sort of feel like one of those women who fall in love with a guy who has been sentenced to consecutive murder sentences and will spend his next five lifetimes behind bars.  This is because somehow I know he has been either misunderstood, judged harshly for a momentary indiscretion or is really a moral guy who has been forced to take unorthodox action for the greater good because, damn it, somebody had to.  And besides – if you knew him like I did – you’d get it and know that he is not unlike any of us.  And, in the end, may be better.

Dramatic strategy:  The dark passenger devil inside us has to breathe at some point and it’s better to root for a fictional killer than spend the rest of our lives in prison, on the lam or in a box underground before our time.  Plus we ALL want to murder someone at some point in our lives. Which makes it universally interesting to see how it will play out.

He’s the Devil among Devils – a killer so brilliant and crafty that he subverts all expectations among his ilk.  This is probably because he also manages to be the Court Jester of Devils if the Joker were the kind of sophisticated dinner companion one would have at a $50,000 a plate charity dinner. This is also probably why he’s starred in at least three huge films, many more bestselling novels, is the subject of a new NBC show, and has become an irrevocable part of American folklore.

Dramatic Strategy:  As Joan Rivers once famously said, “If Hitler had five good minutes, they’d put him on The Tonight Show.”  Can we talk?  Well, he most certainly can – but in a really, really funny way.  Plus, he knows how to eat.  You.  Me.  And any one of us.  And we all love danger. 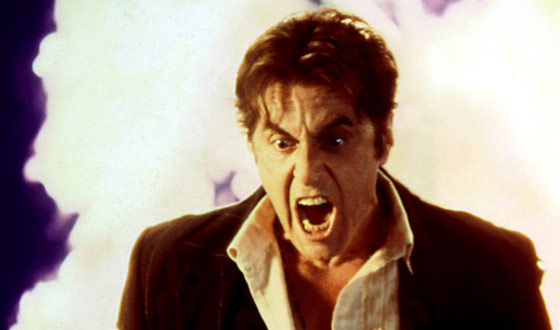 Al Pacino in Everything

He began as Michael Corleone in The Godfather but between recent portrayals of Roy Cohn, Jack Kevorkian and now Phil Spector, he may indeed be The Devil himself.  And if you have any doubt, note Pacino actually did play The Devil (or himself) in The Devil’s Advocate, though his character was named John Milton, which seemed to imply something about Paradise Lost though I was never quite sure what. Side Note: I much prefer Robert DeNiro’s take on Lucifer in Angel Heart because his character was named Lou Cypher (get it??).

Dramatic Strategy:  No one does loveable old coot as The Beast like Al.  Still, there will be an update after tonight’s showing on HBO of Phil Spector despite the fact that writer-director David Mamet calls it a fable; Phil Spector’s wife says its inaccurate; and everyone knows that on both counts the Devil is anything but.

There are numerous other sympathetic Satans but I think we’ve covered the basics here.  So – one final thought:

Anything about this list jump out at you?  Anything at all?

The correct answer:  All the above Devils we truly love are men and there is not a woman among them.  And forget Sharon Stone in Basic Instinct, we don’t love her.  Not really.  Nor did we love Charlize Theron in Monster.  Or Faye Dunaway in Mommie Dearest.  Even Meryl’s ghastly Miranda Priestley doesn’t win our sympathies. They were campy, cultish heroines.  But loving and reveling in their nastiness?  Uh, uh.

However, I DO love Lena/Hannah for what she dares to do that I couldn’t.  And though I do not see her as The Devil but I am willing to accept some of the public outcry and admit that others perhaps rightfully do.  What I can’t understand is – why can’t she be accepted among The Devils we love to love — like all the other men who came before her — rather than be treated as The Young Woman that we love to hate???

4 thoughts on “Sympathy for the Devil”