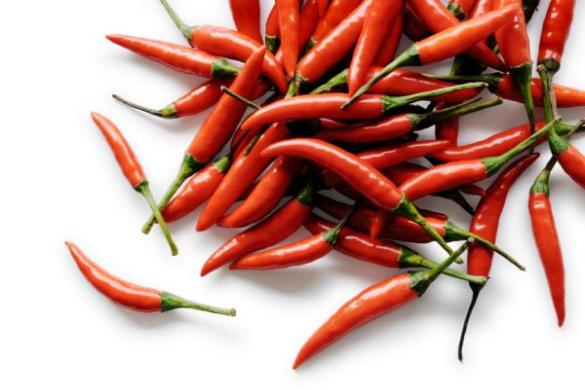 American entertainment culture defines success among its artists with commercial allure and its rewards – how much money you make, how willing the powers-that-be are to pay you even more money or how many different ways everyone else is trying to seduce you towards them.   Since every endeavor has its real world measure I used to buy into this totally.  I mean, you need some sort of objective scale – why not how much you sell or even how well reviewed you are?  Or perhaps it’s even about how well aware certain audiences are of your talent?  The cliché saying of the cream always rises to the top  (meaning if you’re talented enough you will eventually break through, especially if you’re persistent and dedicated to the extreme) is generally accepted by the gatekeepers of most industries as the rule of thumb.  This is most particularly the case by entertainment industry standards and most certainly became the case, over the years, by yours truly.

The problem with this way of thinking is – well – it’s just a load of crap.  A street load full.  Actually, a whole city full. 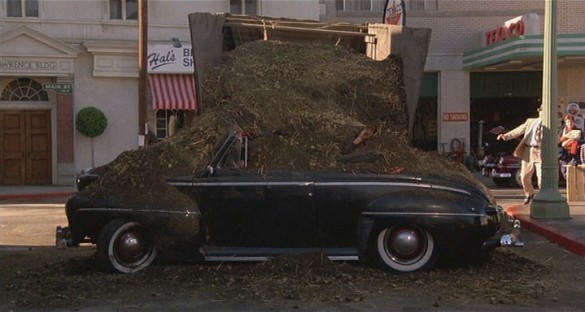 quite literally, a load of crap

A certain degree of talent is necessary but not necessarily immense talent.  Dedication helps a lot but if you’re a workhorse it doesn’t mean people more successful than you will all be working harder.  And, if you’re very talented and working very hard and still unsuccessful by the above definitions – it might not be so much about you but the time period of popular tastes that you were born into and how societal trends have coincided with what you do (unless you are crooner Michael Buble, of course). And how willing or able you are to capitalize on these trends.  Or how possible or impossible it is to even do the latter given your particular talent.

Here’s an example.  There are many wonderful writers of straight on drama nowadays who don’t work in films because those movies are way less popular in 2013.  Just as there are lots of middle-aged men who wrote comic books who never would have worked at the top levels of Hollywood in the 1950s, 60s or 70s but who nowadays are being paid a king’s ransom for telling stories that appeal primarily to the young boys (and some girls) that they once were, along with their parents and grandparents (who they now are).  Note:  A few of these even older guys (and they were primarily male) have actually lived long enough to see their financial fortunes shift in the movie business in a HUGE way.  Yes, I’m talking to you Stan Lee.

He’s laughing because later he’s going to swim a lap in his pool of money.

This is the way of the world of the “biz” and the world each of us in the “biz” has voluntarily chosen to live in.  But to believe it doesn’t exist is as foolish as believing that one shouldn’t try at all because talent, hard work, dedication and extreme perseverance doesn’t matter either.  It all matters.  A lot.  It’s just getting to the right combination of it for oneself – a combination to which there is no knowable formula known to humanity as it now stands.

That is why the only path to take is to be who you are as an artist and to do it in the boldest, most courageous way possible for you.  Don’t apologize for the work you do to anyone, most of all to yourself.  Yes, yourself.  Meaning – never, ever, ever hold back because you’re afraid you’re making you or your characters look bad  – or positioning the piece or yourself in a way that you think ensures people won’t like you or them.  Or that, heaven forbid, you will offend them.  Where you WANT to be is in the nervous area.  The part of you that is too exposed. The line at which people won’t like you.  The moment that you (or your creations) would like to take back.  Some writer – and I wish to God I could remember who but let’s just say it’s Aaron Sorkin because he’s the current fallback position for screen/TV writing guru – recently said in an interview that everything one writes or creates should have something in it that its creator is embarrassed they’ve revealed.  I think that’s true.  But what about whole pieces of work that could be judged embarrassing, or misfires, or dated, or just plain wrong-headed?  Am I saying that you should be unabashedly committed to those and risk it all on something that is likely to lose?

Um…..exactly.  Because let’s take a look at three very controversial and popular films and TV shows of the moment – Zero Dark Thirty, Django Unchained and “American Horror Story: Asylum” – and you’ll see that’s exactly what all three have done.

Wearing shades is the new “playing ugly” in Oscar bait.

If you’re screenwriter Mark Boal and director Kathryn Bigelow, why do another Middle East War movie like Zero Dark Thirty when you’ve already hit the jackpot with similarly-themed Oscar winner The Hurt Locker?  And why do a story for Hollywood about the hunt for 9/11 mastermind Osama bin Laden, the most notorious modern villain in the world, without an ending where the bad guy dies?  Uh, bin Laden is dead, you say?  Well, not the whole time Boal and Bigelow conceived the movie, not when the script was finished, and not when the film was fully financed and ready to go into production.  In fact, it was announced Bin Laden was killed early in May 2011, just as ZDT was about to begin filming.  Which meant (listen up all writers and aspiring screenwriters) the film had to be substantially rewritten in order to accommodate an unanticipated real life ending.

As if this wasn’t enough, why risk government or studio censorship of a pet film project you’re on due to national security?  (Are you nuts?)  I mean, even if you get the story right, you could easily be sued for libel, get professionally discredited (and certainly IRS audited) or at the very worst, slowly water down your piece at various points before its release in order to ensure that it does finally even get a release.

All of these issues invariably came up for the filmmakers of Zero Dark Thirty. In fact, they were also called on the carpet by a group of U.S. Senators (thanks John McCain and Dianne Feinstein, among others) who claim ZDT’s depiction of CIA torture was false and perhaps irresponsible storytelling.  This was then followed by an announcement that the filmmakers’ CIA sources, which they have so far refused to specifically disclose, were themselves being investigated.

Now – step back and think clearly – you are the writer or the director and you love this project.  Will you expend whatever time, clout, money, talent and/or security you have at that point in time, before all this has happened, to something that will likely cause this much of a heap of trouble?

There is only one correct answer.  Yes. 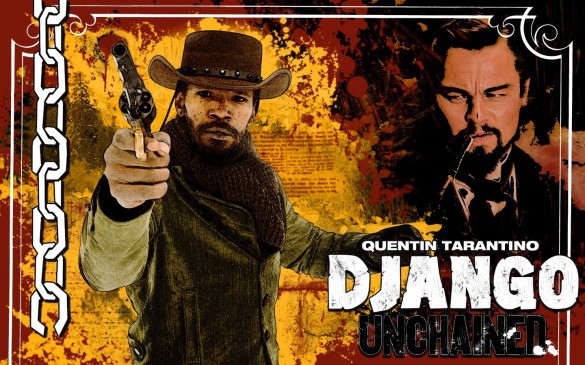 Django Unchained is no less complicated, albeit in a different way.  We can pick apart Quentin Tarantino and his movies all we like, bellyache about how he has enough clout to get anything made that he wants, and argue that his movies are so outrageous and over-the-top that there is nothing he can’t do on film that won’t be expected and, in fact, accepted by his dedicated legion of loyal fans.

Hmmm, not sure I agree. There is a saturation point for just about everything and everyone and each filmmaker’s next film is potentially his or her greatest failure (have you seen Spielberg’s Hook, Alfred Hitchcock’s Family Plot or Billy Wilder’s Buddy, Buddy lately?).  Not to mention – how many white artists among us feel comfortable writing or being associated in any way shape or form with the “N” world in a film about African Americans (even though its set in the Civil War era) or want to risk our prized position at the top of the commercial heap by making a movie where it’s spoken more than 200 times?

Correct answer:  Quentin Tarantino and very, very, very few of the rest of us.  Which is what makes him Quentin Tarantino – the guy whose new movie fellow filmmaker Spike Lee has claimed is “disrespectful” to his (Spike’s) “ancestors” though Mr. Lee has no plans to even see it and judge for himself.  Well, okay then. 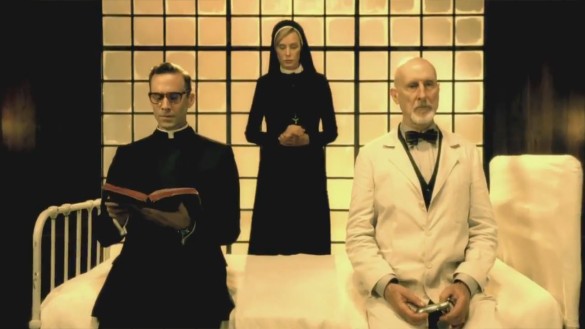 Television usually does not do bold and questionable taste very well but sometimes even the boob tube hits the piercing center of the tiniest of bulls eyes.  I was not going to belabor my love for FX’s “American Horror Story: Asylum” yet another week here for fear of boring my readers except for the fact that NOT belaboring it would contradict everything I’ve just written this week.  So – risking it all – let me tell you once again that this sick, twisted, hilariously dramatic, sometimes offensive, often times derivative and always nonsensically yet incredibly entertaining series never holds back.  And never more so than this past week.

In an episode entitled “The Name Game,” Jessica Lange’s deposed nun and former nightclub singer Sister Jude – the nastiest mistress of the nuttiest loony bin in the early 1960s, has now been stripped of her powers, become an unwilling patient committed to the asylum she used to rule with a collection of nasty wooden canes of all sizes, and has now just been given quadruple the amount of electro shock therapy she was scheduled for due to the hubris of her truly evil replacement – a younger nun possessed by none other than – yes you guessed it again – SATAN!!

After somehow emerging alive from all of the electricity, Judy (no longer Sister Jude) drags her beleaguered self back into the hospital’s recreation room where Lana, a fellow patient Judy at one point herself tortured, is shocked (no pun intended) at how Judy looks and what’s been done to her.  Fearful Judy is gone forever (or has turned into a cousin of another iconic Jessica Lange character, Frances Farmer), Lana approaches her former nemesis and simply asks:  “Do you know your name?

To which Ms. Lange’s Judy replies – or in actuality, sings – with her own version of the 1960s cult hit: “The Name Game” – well, a 2 minute 14 second remake of it with singing and dancing crazy people doing Hullaballoo type choreography.   Sound out there?  Crazy?  Ridiculous?  Campy?  Sick?  Twisted?  “Disrespectful?  “Sad?”  You bet it does.  And its exactly why the song has gone viral and “American Horror Story: Asylum” is the current cult TV hit of the new TV season and this week’s undisputed champion of “must see.”

Think about it.  Real hard.  But – watch this first.