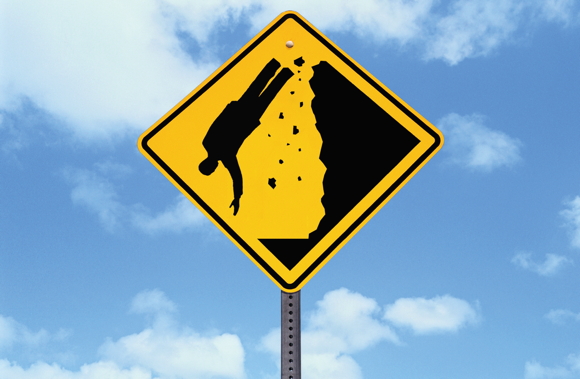 “It is not enough to succeed. Others must fail,” Gore Vidal once famously said. A brilliant novelist, playwright, essayist, screenwriter, chronicler of history and curmudgeonly bon vivant, the 86-year old Vidal died this past week.  Yet his words rang as fresh and as true and, perhaps, as prescient as ever.

Watching any number of Olympic athletes under 30, and even 20, succeed to seemingly inhuman golden heights while others became runner up winners (silver and bronze) by not rising as high but still way above the rest of us, one couldn’t help but consider the weight and currency of one of our most renowned contemporary wordsmith’s most famous words and wonder – why do they feel so timelessly true about American culture in particular?

After an Olympic week of victorious thrills and agonizing defeats covered almost as grotesquely as the moment-by-moment commentary in “The Hunger Games” (but in our case it comes up to 8 hours after you learn the results of the actual races), I can come to no other conclusion than our American culture, or as it is referred to in electoral politics “American exceptionalism,” is in serious need of an attitude adjustment.  And I don’t say this lightly since the amount of attitude I have in need of adjustment can often cover the needs of an entire Olympic team from at least one small sovereign state. 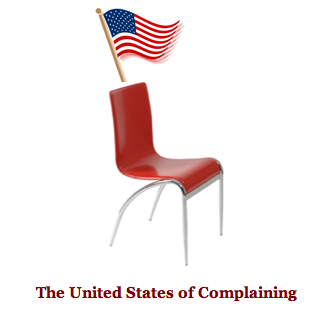 Still, that doesn’t let the rest of you Americans, or the coverage of those who live here, off the hook or off the train of nastiness, pettiness, bitterness or envy.  What else can one think after watching 27 year old Michael Phelps being counted out as something akin to lazy and over the hill by much of the American zeitgeist after placing fourth in his first race in London and coming up one spot short of a medal?

The LA Times, among so may others, gleefully jumped on the bandwagon, immediately trumpeting in one headline story that “Without burning desire, Michael Phelps flames out.” Writer Bill Plaschke somehow managed an Olympic worthy feat of leaping into Phelps’ most inner psychological state only to further go on to describe the swimming phenom and his presence as “the weary flotsam of a shrugging hero.”  He also spent some time observing/predicting an over-the-hill guy who seems “less interested and confused with every lap.”

Certainly, we still live in a free enough country where Bill and his ilk are entitled to print their opinions as the pseudo facts they are, but if one is setting oneself up as a mind reader and predictor of the near future one also needs to deal with some pesky, soon-to-be facts.  Michael Phelps went on to win six more Olympic medals (four of them gold) and the most of any other US athlete in London in the next 7 days.  He would also go on to shatter several more World records and generally outswim teammate Ryan Lochte – the man the Times had dubbed the new golden boy in that same article.   Clearly, this didn’t seem to be an example of an athlete whose Olympic torch was “snuffed” rather than “passed,” as Plaschke wrote about Phelps.  But when we so enthusiastically move to bask in the glory of someone else’s failures  – especially failure of those whose success we find impossible to equal, or even more jealously, to fathom – that is what happens. 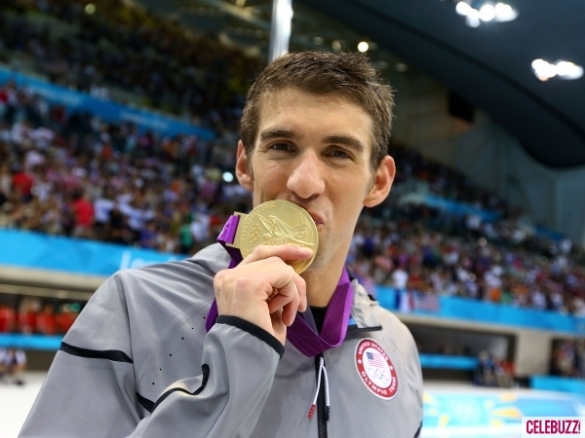 I think you know where you can kiss it.

It’s a shame that we live at a time where we demand extreme immediate reactions to everything as if the full story has already been written before the final verdict (or in this case, swim) is in – and that, for the most part, the members of the media happily follow.  Though at one point it was the job of The Fourth Estate to attempt an unbiased version of current events – news, sports and entertainment – that is no longer the case.  The task is now to feast on the failure – moral, literal or otherwise – of others and the strategy is spin and prognostication instead of facts and informed analysis.  While the media bears some responsibility for following along for money, ratings and perceived relevancy (HBO’s new great show “The Newsroom” asks the question ‘what would happen if reporters chose to go against the popular grain?’), one has to question who else comprises the world we all live in.  Looking in the mirror that would be the reflection you see.  Meaning — they are spurred on by us – their audience.  We are the public that demands a certain kind of flesh-eating dramatization of the weak – especially after they’ve fallen from any sort of height.  One could argue that if we didn’t buy it en masse then perhaps the Fourth Estate wouldn’t serve it up to us so bloodily and consistently. 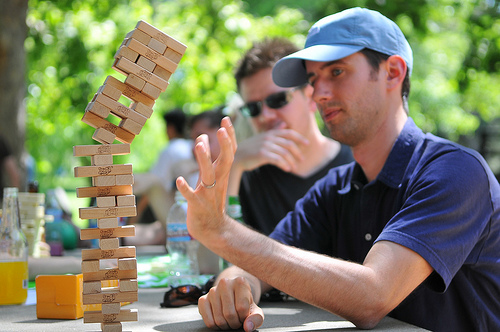 hours to build up, and one second to take down.

Which brings us to 16-year-old Gabby Douglas, the young American who just won two gold medals in London for best all around female gymnast and as a member of the best team of female gymnasts (while also becoming the first African American female in history to do so).  You would think there isn’t much you can say to bring down a teenager who personified grace under pressure (what were you doing at 16 years of age?), leaving home in Virginia Beach at 14 to move to an Iowa town where she was the only dark-skinned woman to train and study (and where, due to economic conditions, her visits with her Mom were limited to Skype).  But we, the quick-to-judge public, found a way.  Numerous comments and commentators in this country seemed particularly perturbed by Douglas – but not because of her athletic performance.  In many strokes of a pen that would certainly cause suffragette Susan B. Anthony to spin in her grave – Gabby Douglas was raked over the coals for no less than her – hair?

Here’s a lovely example of one of our fellow Olympic watchers (from the Daily Beast):

“I love how she’s doing her thing and winning,’’ says 22-year-old Latisha Jenkins of Detroit to The Daily Beast. “But I just hate the way her hair looks with all those pins and gel. I wish someone could have helped her make it look better since she’s being seen all over the world. She representing for black women everywhere.’

“It’s taboo culturally to be seen in public with a kinky hairline and your ponytail is straight,” celeb hairstylist Larry Simms, who styles Mary J. Blige and Gabrielle Union, told the Daily Beast. “The textures don’t match her own hair and the added-on hair and that’s a problem. I think black girls in particular view her as a representation of themselves for the world to see. She just needs some Smooth and Shine gel and she’d be OK.’’ 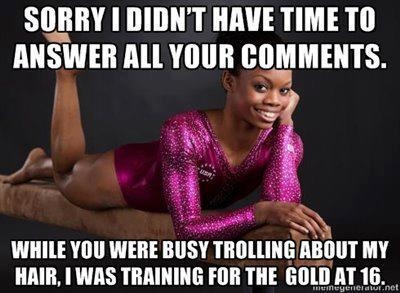 Let’s recap — this 16-year-old from Virginia Beach is now the first African-American woman, as well as the first person of color, to win gold in the gymnastics individual all-around competition. She is also the first US gymnast in history to win both individual and team gold at the same Olympics.  But keeping human interest going is a tricky thing – especially when we’ve heard countless Olympic stories of sacrifice, real-life tales of rising from working class roots to the heights of fame and riches, and morality lessons of young people achieving what seems inhumanly possible.  However, tapping into the not too often enough mined sensibilities of Black woman and their hair – especially the hair of a Black woman who is newly famous – then wow, we’ve really got something. (And we haven’t even gotten into the idea of 13 and 14 year old female athlete’s de rigueur requirement to wear numerous shades of eye shadow to enhance some idea of camera-ready beauty).

Of course, the media and we in the public could be more responsible.  But this would also require some cooperation from the corporate powers-that-be to take a bit of the lead and not throw up roadblocks in reflecting some of society’s other wants and needs.

That doesn’t appear likely.  In fact, NBC has taken its boom in record ratings from London to interpret that its coverage is both wonderful and cutting edge and what it defines as a “new kind of American viewing.”  The network prefers this analysis rather than the truth – that NBC is just the only game in town that any sort of Olympics fan is able to watch.  The network’s hubris is like running unopposed in a presidential election, winning in a landslide and basking in the glow of being the popular favorite.  Funny – as a college political science major in 1970s America I was taught to easily recognize this kind of behavior in the victories of totalitarian elections in the third world and other types of countries.  Like when people like Saddam Hussein or Ahmadinejad run ostensibly unopposed. 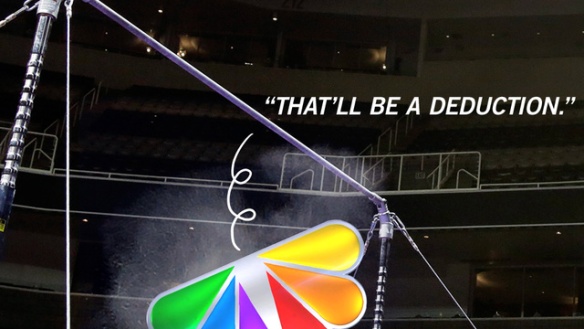 Must have been the dismount.

Of course – you don’t need to take my heavy-handed words for NBC’s sense of self.  Here’s the take of NBC Sports chairman Mark Lazarus about the network’s ratings:

“I think what we’ve proven is that the American viewing public likes the way we tell the story and wants to gather in front of the television with their friends and family — even if they have the ability to watch it live either on television or digitally,” Lazarus said. “I inherently trust that decision is the right one and that people want to see these events.”

Lazarus does acknowledge complaints about the brand of this year’s Olympic coverage and NBC’s decision to run most of its key moments 8 hours after the results are widely known.   He heard the public complaints.  But much like presidential candidates who refuse to release a record of their taxes – he claims the rights of the public “to know” are really just limiting, and the federal decision once upon a time that the public really does own the airwaves and that NBC is just renting them, is a limited way to look at things.  Because, he reasons, in the end, one’s business model trumps everything.

“As programmers, we are charged to manage the business,” Lazarus reminds. “And this is a business,” he said. “It’s not everyone’s inalienable right to get whatever they want. We are charged with making smart decisions for our company, for our shareholders and to present the product the way we believe is best.”

With this logic of  “we will do what we want because we want to” – without any sense of what is fair, balanced or perhaps morally right for the people we serve – we reinforce a Culture of Id.  Not only in our decisions but also in saying what comes to our mind in a knee jerk fashion without much thought.  In other words, giving in to our lowest instincts of envy, greed and jealousy.  It might be human nature to be prideful – or strive to be the Olympic ratings/moneymaking best.  But to do so to the detriment of others – or worse when taking down people whose desires or successes or wants annoy or threaten you or your bottom line – is that really just another human story?

Well, it is what Vidal so wisely put to words and reasoned that we indeed are so many decades ago.  And judging from the last 10 days, it doesn’t seem like we’re going to change anytime soon.  Unless enough of us are willing to form our own elite team of change whose hope it is to rewrite the words of one of our masters.