It’s sort of cool and hip these days to be cynical.  To bury your head in the sand from your perch of snideness in the Kingdom of Superior and sort of turn off or hurl occasional pithy comments at institutions or movements or even people you don’t like.   Contrary to popular belief, this does not take you out of the battle, but actually puts you right in the middle of it.

Angry, distant, emotional, removed or snide – they are all discourse, they are all opinions on an issue.  Even silence is, in itself, weighing in.  If you think that’s not true, watch some of the most powerful actors in the world kill you (in a good way) with their silent stares.  Look at Viola Davis at work in “The Help” (or even in “Extremely Loud and Incredibly Close”).  It’s not about what she says to her white overlords but what she chooses not to say that lets you know what she is thinking.  Observe Robert DeNiro as he cleverly listens to the idiots that are thinking of crossing him in “Casino” (or almost any other movie he’s done).  It’s not usually about his dialogue but the way he silently reacts to what those dummies are doing.  His non-verbal cues are always flawless because they are predictably unpredictable and as such he’s always telling us something — usually that they’re in trouble and will soon be disposed of by him or his men. 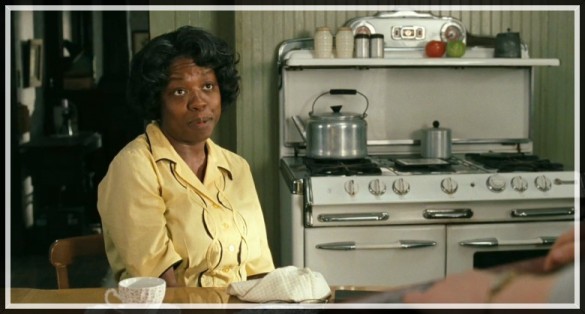 Saying everything with a stare

So for those of you who think that by not participating in politics or sitting silently by while you stew about the Iowa straw poll; the Republican primary race in general; Barak Obama’s socialist liberal bent or perhaps the fact that he’s not liberal enough — and never say anything about it – I beg to differ.  Your indifference is saying more than you know.  Your look of high and mightiness; your determination to NOT pay attention; even your purposeful lack of knowledge of the issues that might affect your life – they all say something loud and clear to everyone about you and how you engage in the world.

Take your choice or we will.  Because those are all things people are thinking based on what you’re doing just by not doing anything.  Imagine what they (we) would think or the reactions you could evoke or the changes you could make in the world if you actively did SOMETHING??

If you’re an artist the same is true about your work.  You think you’re writing a light, frothy romantic comedy and not revealing something of how you feel about love and relationships?  Uh, I don’t think so.  You didn’t choose to write “Friends With Benefits” only to make a buck.  The thought of “friends with benefits” has crossed your mind or you wouldn’t have gone there in the first place.    Don’t believe for a second that “Pretty Woman” didn’t have something to do with the fascination with working girls or the men who love(d) them.  Even if what you’re doing is the new Katherine Heigl movie “One For The Money” – (make her stop!!!) that too says something – though it might not be something worth talking about here.

The point is that you are taking a stand every time you pick up a pen; choose to pitch something a certain way; photograph an assignment the way that you do; or miss a deadline on work people are waiting for.  It says a lot about you even when you don’t want it to so you may as well be bold and take a position fully and own your views and actions.   As a writing teacher, I see this all the time with students who phone it in on some of their scripts yet they can’t help show occasional glimmers in their work (aside from their bad work habits) of who they are.  Oh, the sadness of wasted potential, I think.  They’re funny, hurting inside, sad, and really smart.  That is really what they’re saying but are determined not to.  I can get beneath the façade of snideness by reading the work of a student pretty easily and so could you (it just takes practice) despite even the weakest script imaginable.  You’d know they hate authority; are a softie at heart; want to be in love; are acidly angry about injustice or the hand they’ve been dealt; are angry at their mothers and fathers or have an unrealistically favorable view of their families; are in or about to be in a dysfunctional relationship or, perhaps are truly nice gals and guys you worry are one day going to get hurt.

Yes, all this you learn by the smallest things they (or anyone, really) write on the page – even in a spec script of “It’s Always Sunny in Philadelphia, “iCarly” or “Justified.”  Even in a one page short film.  Certainly in anything feature length.

If that’s the case (and I say it is so therefore it must be), why are people so hesitant to commit to something publicly?  (Leaving out big issues like the 99%). Why this veil of snideness?  A well-known playwright told me some years ago it’s because “we live in the age of irony.”  I agreed at the time.  But now I think that’s too easy.  Here’s what I think it is – fear.

Fear of being bad.  Fear of being judged.  And these days fear of – well – retribution from….(fill in the blank).  “I want to hang on to my very small piece of the world because what I say might cause it to be taken away and then where will I be?  Even more fucked than I was before.  Perish the thought!!!”

The real truth is nothing is original AND everything is political.  And that neither fact takes away from the message of what you’re saying.  It only makes it stronger.   Because though the message is the same and we’ve heard it all before, nothing has quite been said the way you will say it.  If you think that’s not true consider why people are forever writing love stories.  Not like we haven’t covered that territory over the last google years, huh?  And that even though Woody Allen, love story maker extraordinaire, claims to do NOTHING autobiographical we watch “Annie Hall” and “Husbands and Wives” and, well – we know a lot better.

As for being political – Cahiers du Cinema posited in the sixties that every film, no matter how slight, is political in that it chooses to see the world in a certain way.  Then, in the seventies, feminists advanced the idea that the personal is political.  That whether you like it or not, gender roles and how you choose to fulfill or not fulfill them traditionally was, indeed, a political act – despite whether you chose it to be or not.

It’s been more than 40 years since then and we now have 24/7 news, the Internet, the Freedom of Information Act and the National Defense Authorization Act.  Are you going to sit there and tell me that not everything you’re doing is making some sort of political statement?  Or at least, on some level, seems that way?  I think not.  The question is – what are your actions (or inactions) saying about you?  And are they what you want, or even choose, to say??

2 thoughts on “The Sounds of Silence”