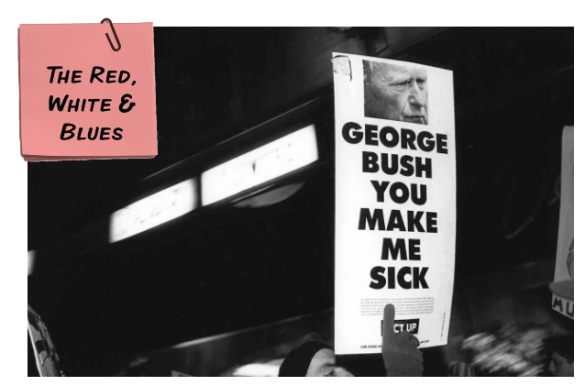 By most accounts, George H.W. Bush seems to have been a very nice man who cared about his family.  He was able to leave differences with political enemies behind (Note:  The personal letter he left at the Oval Office for Bill Clinton, whose election famously denied him a second term, is a classic).  He even sporadically brought along his most famous imitator – Saturday Night Live’s Dana Carvey – with him to sporadic speaking engagements.

Can you imagine Alec Baldwin being brought along by ….

Only if it were in lock-up…

Still, it is important to remember that no one is perfect and no president EVER is even close to being so.

In the case of George Herbert Walker Bush, a president I lived through as an adult, I felt nothing but relief when his reign finally came to a screeching, humiliating end.

From a 1991 ACT UP protest in Washington DC #neverforget

We keep hearing this weekend about the wisdom of the first Iraq War, his adept handling of a crumbling Russia and the personal inclusiveness of the extended Bush family to so many friends and foes in the political world.

Let’s not debate the first two issues because it will become an endless quagmire of left vs. center (Note: Though I do hope one or two conservatives do read this).  Instead, let’s speak to the issue of inclusiveness.

Nothing about the Bush Sr.’s felt inclusive to so many millions of us during their reign.  In fact, it was one of the reasons he lost his re-election.  There was that famous moment where he looked at his watch during a presidential debate because he seemingly had somewhere more important to be.

And then another during the campaign where he seemed flummoxed at the sight of a supermarket scanner.

I need a price check for my EYEROLL

There was also his using racism and racial politics with a TV ad that wrongly linked his 1988 Democratic challenger, Michael Dukakis, to a darkly Black convicted murderer, Willie Horton, raping a woman during one brief prison furlough.   If you need any more historical references to contemporary white racist dog whistles, here’s one not to miss.

Still, that was merely a postscript for me.  From the moment Bush, Sr. was elected to office during the height of the AIDS crisis, it became crystal clear to me that he would NEVER address the hundreds of LGBT friends and acquaintances I saw dying around me at the time, some in the streets. 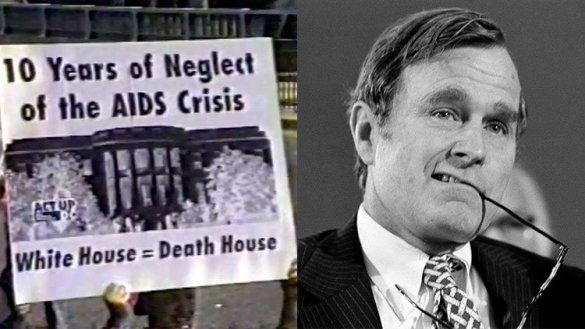 With negligible funding increases in relation to the lethal, and at that time, quickly spreading pandemic, he began to be forever linked in my mind with his predecessor Ronald Reagan as the passively indifferent executioner of thousands who deserved better from a government they in part paid for with their tax dollars – a government they so very much needed in their moment of unimaginable emergency.

First Lady Barbara Bush eventually took a tentative step and hugged a baby with AIDS.  But where was the massive hug for my community?  It was never to come.

Each year this is put into context on Dec. 1, World AIDS Day.  Now that there are drugs to ensure AIDS can more than likely be a chronic rather than immediately lethal condition in the developed world of the US (Note: That is if one can afford the drugs), it is easy to forget our recent past and knowingly cruel inaction of US executive leadership, particularly from the Republican side of the aisle. 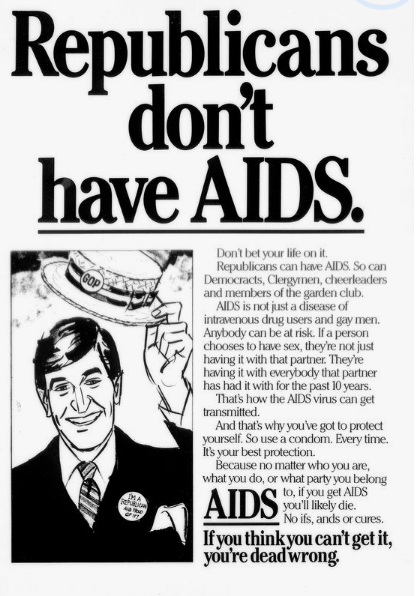 An AIDS Prevention ad from 1987. Read the fine print.

Combine insatiable ambition and timidity at losing power with inbred prejudice against a niche group of people you don’t know and will provide you no upside in electoral matters, and you have a perfect storm of faulty decision-making in the eighties.  Add to that some real fear and lack of education (and interest) on medical matters and, well, you can read up and fill in the rest with statistics and facts.

This might all somehow remain in the horrible, regrettable past if for the last two years on World AIDS Day (Dec. 1) the US government did not advance its chief homophobe, Vice President Mike Pence, to speechify on the subject.

Several days ago Pence purposely failed to mention the LGBTQ community in his very public remarks even though this community is the primary group affected in the US (Note: 70% of cases).  This says nothing of the many tens of thousands who perished over the decades, remain infected and continue to contract the disease.

Needless to say, there was no mention the prior year either.

What Pence did do this year in his remarks was say the word faith 27 TIMES and significantly credit faith-based organizations with leading the fight against AIDS.  One needn’t be a historian to understand that through the eighties and nineties there were countless Christian institutions and religious families who not only didn’t lead but turned their backs on dying gay men, often allowing them to perish alone or, if they were extremely lucky, be comforted by the mercy of strangers. Here’s one story of an incredible woman from Arkansas you might take time to read. There are countless more stories, though most do not involve the type of ultra-Conservative Christian churches to which the vice-president belongs and/or refers to.

In fact, here’s another inconvenient FACT of history.  In a 2000 campaign speech while running for Congress, Pence once again made no mention of AIDS and the LGBT community.  What he did do was advocate a stop of federal funding to ANY organization that would celebrate and encourage the types of behaviors that facilitate the spreading of the HIV virus.

He even topped himself at the time by adding: Resources should be directed toward those institutions which provide assistance to those seeking to change their sexual behavior.

In other words, conversion therapy.

I know I’ve used this gif before, but it feels right to use it again. #SOEFFINGMAD

If I were a certain kind of journalist/blogger I might relate here that there has long been talk that Pence himself has undergone conversion therapy, was said to have once collected muscle magazines in college that a roommate wrote were quickly gone after Pence returned from a long summer break engaged to his present wife, Karen, and, as a young adolescent was referred to as Bubbles, a nickname given to him by members of his immediate family.  Some say it might have even been his own Dad.

Well, these days I’m not sure what kind of journalist/blogger I am or how I feel about bitchy, idol gossip.  I only know when it comes to AIDS I have a memory like a selective elephant and am unafraid to fling dung in honor of the people I greatly loved and lost, none of whom even lived half as long as 94 years.