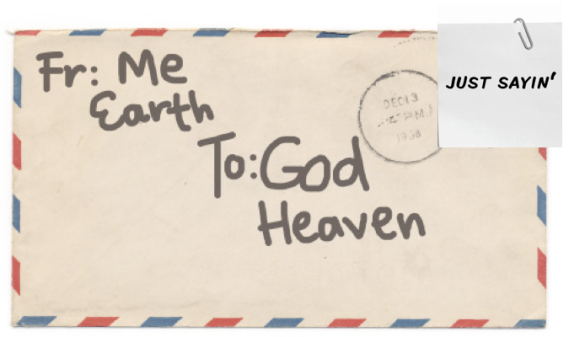 If I were a religious person, or at this point believed in God at all, I might consider this weekend’s —

The beginning of a MASSIVE DIVINE PUNISHMENT for the United States.

Heck, maybe I’ll join a church, rejoin a synagogue, or start my own religion just so I can come up with some irrefutable reasons.

The Patron Saint of the Chair

Don’t get me wrong, it’s not as if I’m not a somewhat spiritual person. I often think there has got to be something more than what we can all see in any moment (especially this moment) and some mysterious order to a universe that has personally given me pizza, Bette Midler, and the ability to block it all out by playing electronic Scrabble with myself.

… and Jon Hamm and puppies

On the other hand…I have five fingers (as the desperate vaudevillian said as he tried to make a joke when, alas, he had clearly run out of them for a demanding audience).

If you’re anything like me – and perhaps if you are reading this you are in danger of being so – you can’t for the life of you or anyone else rationally understand why Sheriff Joe could get convicted in court some weeks ago and this weekend be rewarded for his crimes of putting brown-skinned people (many of whom were guilty of nothing at all except being non-white) in holding pens where the temperatures were upward of 140 degrees and the stench of their own feces and menstrual blood wafted in the air all around them day after day, week after week and, perhaps, longer.

Where do I even start? #horrified

Here is the ACLU’s list of some of Sheriff Joe’s crimes against humanity.

So how can it be that some minority kid who smoked a little pot or sassed back a law officer sits incarcerated for years?

Who would have thought former George W. Bush speechwriter and leading conservative thinker at the Atlantic, David Frum, could explain it to me.

The link is here and you should read it. But Frum’s primary point is that Trump has chosen to do the Sheriff Joe pardon and the military transgender ban precisely this weekend because it is under the cover of the floods, hurricane, and who knows, by the time you read this (pestilence?), in Texas as a way to divert your attention from the heinousness of his actions. He argues it is a sort of a reverse showmanship –- rather than trying to get your attention he is seeking to hide it via the bigger event.

Of course, Trump being Trump, that’s not totally it. It’s also a big F-K YOU to anyone who dares to reel him in, challenge him, disagree with him, unseat or even partially bask in his glory. I’ve felt this for quite a while. But in his writing this weekend Frum quotes the tweet of the editor of a conservative website and states the case far more eloquently than I do.

The main reason for President Trump to pardon Sheriff Joe was fuck you, leftists.
The new rules, bitches.😎

Still, who would have also ever thought 10 years ago – when I proclaimed to anyone who would or wouldn’t listen that Dubya would be THE WORST PREISDENT IN HISTORY by a mile in my lifetime and two lifetimes after mine – that the very man who put so many of those empty, callow words in his mouth could be so in sync with what I was thinking?

The next logical conclusion might be well, if that’s possible perhaps things are not as bad as the avalanche of massive divine punishment you are cleverly predicting by not predicting, and thus absolving yourself of all responsibility for putting it out there?

Where I’m at right now

Of course, I have no way of knowing, not being a person of God or any particular faith. Though I am culturally Jewish and reacted mightily to the chants of “Jews Will Not Replace Us” by those protestors just two weeks ago in Charlottesville, VA.   That place where a woman was killed by one of them. The them being part of the group Herr Trump (aka The American Fuhrer) defended as “many good people” several days later.

Too much to call him Herr Trump (aka The American Fuhrer)? Or too soon? Well, let’s let God be the judge on that one.   I’m willing to give Him/Her/It the Power on this one just so I don’t have to decide.

What will be decided in the ensuing months and year (or two) is just how much help our Electoral College Potus received from the Russians in order to get elected in the first place and how many laws he and his minions broke in the process, if any. There will also be verdicts on the man’s (Fuhrer’s?) businesses, taxes, financial dealings and perhaps even sexual habits. Given all of the accusations in that infamous dossier, one can be hopeful.

You know the one…. (image care of the brilliant Full Frontal with our girl Samantha Bee)

That’s because you can’t hide the truth from God or a special prosecutor like Bob Mueller.   Unless, of course, you are crazy enough go nuclear and….

Okay, let’s not even joke about the possibilities of that. The one thing we know about Trumpian diversions is that they ARE always done under the cloak of protecting himself, his supporters and every member of his extended family. Truly, there is not an underground shelter big enough. Not even North Korea could build that.