By now everyone but three people in the world (and you decide whom) have heard this expression:

But are there differences between opinions and beliefs?   Or a belief system?  And what about facts?  Where do those pesky critters enter into it in today’s world?  Because there are any number of statements that I would have sworn were facts a mere 5-10 years ago that are now considered opinions, beliefs or feelings in opposition to a belief system.  Or something far  more blasphemous worse.   (We’ll get to the latter in a bit).

There was a time many decades ago, when movies were truly worth arguing about and not just lamenting. I would get into heated discussions with friends and colleagues about the merits and failings of the hot or cold film of the moment.  Sometimes these debates would actually escalate into shouting matches, personal insults and, in the case of one first date that I had who didn’t think Woody Allen was particularly funny, the end of what I’m sure would have been just another in a series of dysfunctional relationships I seemed to so enjoy at the time.  (Note: FYI, the Woody and dating life I’m talking about were many decades ago – just in case you were wondering). 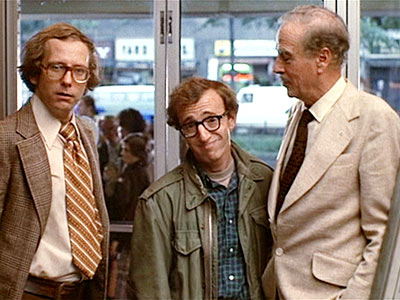 You know nothing of my work.

Aspiring Missouri Senator Todd Akin thinks women have something in their biology that shuts down pregnancy and Illinois Congressman Joe Walsh, who is running for re-election, said just a few days ago that medical technology has evolved to such an extent that it is now physiologically impossible for any woman to die due to childbirth, thereby ostensibly ending any legal right on the part of said woman to end her pregnancy.

Of course, neither Mr. Akin nor Mr. Walsh’s facts are correct.  But one can’t argue.  Because each of these middle-aged white men (I can call them that because I AM a middle-aged white man) will somewhere, someplace, find a pseudo “expert” (and chances are the expert will be another middle-aged white man) to back them up.  This is much the same strategy my friends and I would use to defend our favorite movies – the corralling of mass “expert” opinions (or, perish the thought, box-office grosses) inside the industry in order to disprove anyone who would even consider voicing “facts” to the contrary.  It is also interesting to note that the data could be used to support the argument any way you wanted to.  For instance, the lack of box-office for a particular film could be used as evidence of its genius (I even tried this strategy as late as 1995 to support the merits of Claude LeLouche’s quite original take on “Les Miserables”) just as movies that set record-breaking numbers could be seen as either inferior mass pabulum (sorry “Forrest Gump” and “King’s Speech”) or confirmation of its value and true emotional depth (“E.T’’s success on all levels simply cannot be disputed).

The artistic merit of a film has implications for the creative community.  Those include who will get meetings and future work, as well as how movies, as a whole, are viewed by the public at large.  Also, how it will survive to either inspire or repel future generations of filmmakers who will choose to either build on ideas that came before them or use the perceived inferiority of said film to be bolder and more original than any one filmmaker of the past, particularly the one perceived to be inferior, could have ever imagined.

Certainly there is value to all of this.  But let’s face it – the fact that I wasn’t bowled over by “Argo” last week despite its “A” plus Cinemascore, rave reviews and box office numbers, doesn’t matter in the scheme of things.  Not only because I don’t exert much public influence except over my blog readers (and certainly that’s debatable), but because – as Alfred Hitchcock once reportedly told Ingrid Bergman when she was fretting over something while shooting one of his films:

This, however, is not the case with, let’s say for argument’s sake, politicians, who have feelings or opinions that they all too frequently nowadays try to masquerade as facts.

For instance, perhaps scarier than potential Senator Akin or Congressman Walsh’s view of the female anatomy are several congressmen presently on the House of Representatives SCIENCE committee.  Case in point — Georgia Representative Paul Broun, who is also a medical DOCTOR, believes that evolution and the big bang theory are “lies straight from the pit of hell,” partly because he can’t fathom that his “lovely” wife was descended from an ape and partly due to the beauty of the world, which he believes could only have been created by a superior being in the space of a week.  I also don’t want to leave out my own state of California, one of whose representatives, Dana Rohrbacher, another sitting science committee member, eschews today’s overwhelming evidence on global warming, suggesting that having this thought is akin to believing that temperature fluctuations millions of years ago were due to dinosaur flatulence.  (Rachel Maddow explains it far better than I can, if you want more, click on her) 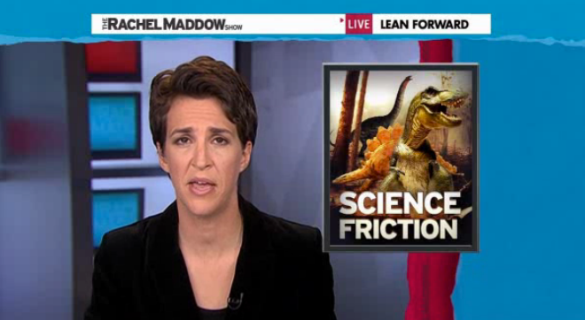 Never mind that critical ice levels in the Arctic Ocean melted at record rates this summer (which will in turn affect global temperatures) and that another MSNBC’er, Chris Matthews, reports that many Alaskans at a recent science conference he attended say that ships will soon be able to pass easily over the North Pole.   Two very powerful members of the science committee seem to deny climate change and overwhelming evolutionary evidence based on the actual bones of animals from millions of years ago not on facts and physical evidence but on a belief system rooted in theology.  Which is fine for them but perhaps not so fine if you’re an agnostic, an atheist or a religious person who likes to keep God between you and your Goddess of choice.  Or a scientist seeking funds to save an overheating Earth from extinction or medical researcher hoping to fund a new drug protocol instead of the old tried and true method of bloodletting to cure cancer.  On that note, I suppose we can at least take solace in the fact that Congressman Broun is no longer a practicing physician and will not be prescribing the biblical remedy of leeches if you happened to come into his medical office seeking treatment for a 2012 heart condition. 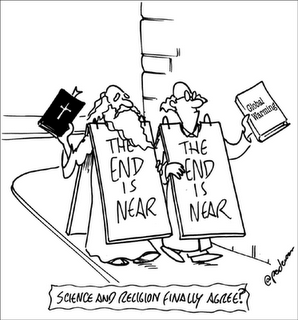 The issue is not whether any of the white middle-aged men mentioned are right or wrong but how much their personal opinions and feelings affect public policy of a committee that is responsible for potentially billions of dollars in research grants and the general direction of medical and scientific exploration for the world’s greatest superpower.

I’m all for anyone believing anything they want as long as they don’t try to make me believe it or use those beliefs to further their own agenda and thwart mine.  For example, when several friends proclaimed the brilliance of Terrence Malick’s “Tree of Life” to me last year I was happy to accept that as their opinion because I was confident in the fact that their enjoyment couldn’t literally prevent me from waxing poetic over, say, “Bridesmaids.”  However, when they told me I HAD to at least admire “The Tree of Life” as a piece of cinema I felt a line had been crossed.  I mean, if I wanted to admire a purposely obtuse film that didn’t work I could have saved the $12 ticket price and just imagine what would have happened if the sloppily constructed, somewhat indecipherable second screenplay I had ever written had actually gotten filmed.

Or I could have saved the admiration for my auteur du jour, Paul Thomas Anderson and his much-maligned (in some circles) “The Master.”  PTA’s even the type that might write 2012 bloodletting into a medical office scene, though at the very least I can rest assured that he is not going to require said medical “procedure” as part of the admission price to said film in the future.  (…or…might he?…)

As we approach the presidential election and the release of a slew of movies being touted for Oscar contention this year, it might be worth considering the differences between opinions, feelings, belief systems and facts.  One way to do this is to accept what is the official 2012 definition of one of these words.

Anyone who chooses to deny or confuse these facts for the benefit of themselves or their belief system as a way to influence public policy, could quite fairly, by 2012 definitions, be considered an asshole.

And that is one last fact.