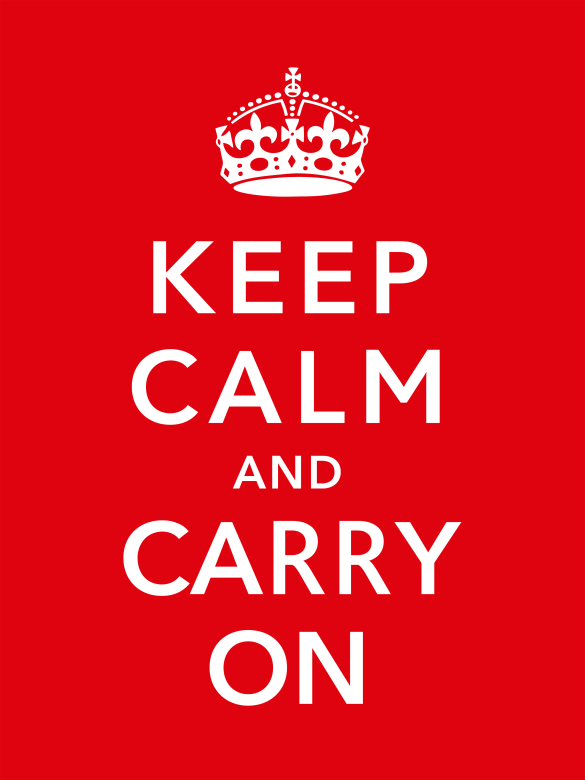 So says the Queen!

I get really annoyed with people who tell me to calm down.  What I hear is:  you’re hysterical for no reason – try to behave like a normal person – there’s no reason to get so excited – you’re blowing blankety-blank out of proportion and – the absolute worst –- grow up! On the other hand, I don’t mind when I tell myself to chill out or when a very select and very, very small (miniscule, really) group of loved ones give me a sideways glance now and again suggesting I just might not want to say what I am about to say or act like I am about to act.  On rare occasions I don’t even mind words like “relax,” “stop,” or “you don’t really want to do that, do you?”  In fact, I have even learned lately to do that for myself. Holiday time, which, let’s face it, starts right after Thanksgiving and ends a couple of days into the new year, will undoubtedly bring out a lot of calm downs from both directions — either from you or, if your life is anything like mine, to you.  But either one of those are akin to a well-meaning someone registering you for a yoga class against your will or a well-meaning you deciding to drag someone to your yoga class because you know, without a shadow of a doubt, that it will be good for them.

Of course, I would never drag you to yoga since I like bouncing around to loud music when I exercise (if you substitute yoga for watching Homeland on Sunday nights it might apply). 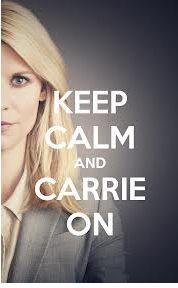 As for those trying enlist the rest of us into balance and deep breathing against our wills – uh, good luck with that.  Plus, if you’re even thinking of telling someone like me to calm down about it or plan to suggest that this attitude is the very reason to do yoga my answer to you is a simple this: shove it up your Menorah, Christmas tree or appropriate something or other. This does not mean that I am not an advocate of peacefulness or a large helping of calm at this “most wonderful time of the year.” Far from it.  But the calm has to be the choice of the individual, not an imposition by perhaps the very person or thing that is making the individual feel anything but….  For my vegan friends – we get the whole idea of promoting good nutrition but you are not going to insult or intimidate people into your way of thinking.  That only works when I personally do it to members of the religious right who call gay people sinners or claim women shouldn’t have control over their own reproductive rights.  Nor will posting pictures of animals going to the slaughter on Facebook or extolling the merits of a plant-based diet on Thanksgiving or Christmas or Chanukah as your family is about to cut into the white meat, ham or brisket they’ve been looking forward to all year.  That will only serve to make everyone nauseous after dinner and cause you to go into a murderous tofu-fueled rage, yoga or not. 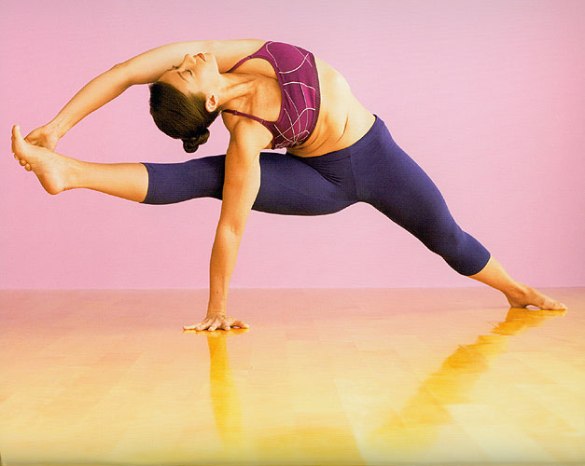 Because that looks comfortable…

As any one at a 12-step meeting will testify, you can’t save people who don’t want to be saved.  The best you can do is offer up an alternative path in the discourse of life or provide a helping hand when someone reaches out to the world or specifically comes knocking at your door.  The real radical act is being there for someone (or everyone) not browbeating them into your way of thinking (as if that were possible).  Or, worse yet, browbeating yourself around holiday time for not being the person you thought you’d become and using the this period in particular to sink even further into self abuse, annihilation or your chosen weapon of destructive choice.

Taking a breath and then a step back helps with all of this.  As does prioritizing, making lists and realizing you will never get to every single item on your personal spreadsheet because there will always, always, always be more to do.  In truth, the most you can hope for is to reduce the list by a little (or even a lot) and stay a bit ahead of the curve as you drive through the next 28 day obstacle course of twinkling lights, stolen parking spots and petty innuendos from fellow put upon co-workers, friends and family all played out against a cheerily relentless holiday music drone. I learned this the hard way when we threw a party at our house for two hundred plus students last week and in the pouring rain some crazy neighbor lady two houses up (who I had never met) leaned on her horn for five minutes in front of our house and demanded I find the owner of the car parked in front of her house and get them to move so she could conveniently pull her gas-guzzling SUV into what is and will always be a spot on a very public street.  I learned it this month when several friends and family members grew seriously ill and landed in the hospital or, one case, out of it for the very last time.  And I learned it yet again a few days ago when the kitchen ceiling started to leak, I twisted my neck by sitting the wrong way, and I had to stay up till 5 a.m. to finish work that I had seriously procrastinated on that I suddenly realized was absolutely and terrifyingly due the next day. 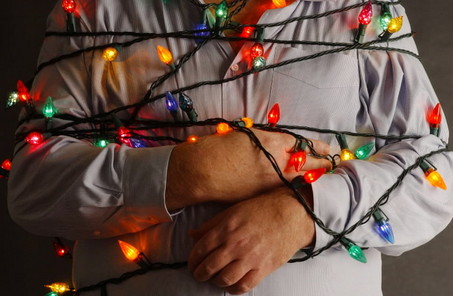 Tied up at the moment…

What I tell myself – then and now – is not to calm down but that these are high-class problems of the privileged not living in a third world nation (or that they are merely unavoidable human ones).  And then, amid numerous breaths, I also try to look at the many pleasures of life this week.  The friend who came to visit for a couple of weeks because we live in an age where micro-budgets movies can happen and 12 year old screenplays can indeed see the light of day to great affect.  Or the other party we were also lucky enough to give at our same house the following week for 45 more than deserving kind and lovely call center volunteers for The Trevor Project, the nation’s leading hotline for at risk youth.  Or the fact that for the next four weeks I will actually have time to do some of my own reading and writing and relaxing while clearing my head, recharging and pumping some disposable income into the nation’s economy (and I’m not even a JOB CREATOR!) for stuff I (and others) momentarily want but certainly don’t need.

Not to get too George Bailey/It’s A Wonderful Life on you, but after countless stress-filled holiday seasons, these days there is a light at the end of the tunnel where I’m finally breathing pretty well.  Maybe I’m just tired and find it takes too much effort to be continually worried and pissed off.  Or maybe it’s the new asthma medication and bi-weekly allergy shots that have cleared things up.  But I don’t think so. 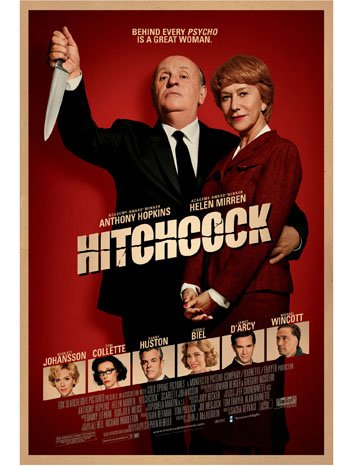 Like most changes in my life, I chalk it up to the movies.  I recently popped into the DVD/DVR/IUD a screener of Hitchcock, a sort of cinema parlor trick on the part of Anthony Hopkins and Helen Mirren as they evoke the great director and his wife and the turbulence in both their personal and professional worlds during the making of the Master’s iconic film “Psycho.” (Note: this is not the Phillip Seymour Hoffman Master but the nickname of one of the most important filmmakers of ours or any time).   While I can’t say the movie is great, it is certainly great fun at many turns, which certainly makes it worth the effort.  In any event, as I was treated to the iconic Hitchcock greeting of “Goood eeeeevening” while his creepily bouncy theme song played in the background, and as I laughed as his disdain-filled wife described his body as “corpulent” and as I was appalled not by Scarlett Johanssen as Janet Leigh but by the fact that she could only feign terror in her famed Psycho shower scene real enough to satisfy her director only when Hitch himself got his corpulent self up out of his chair and came dangerously close to stabbing her up close and personal — I was reminded of one of his great pronouncements and unintended life lessons – one I’ve quoted before but bears repeating: Ingrid Bergman fretted to the director over something or other during the filming of 1946’s Notorious, probably no more or less nervous that any of the rest of us will be during the next 20 days, which means greatly stressed nonetheless.  And to her great horror, the director – who usually got the chosen result he wanted in any given situation – shot back what is now, and will probably always be, the perfect advice for life.  No, it wasn’t Boo!  It was, quite simply, this:

I find this, and this alone, to be the primary reason to continually enjoy and breathe.  As long as it’s still possible.