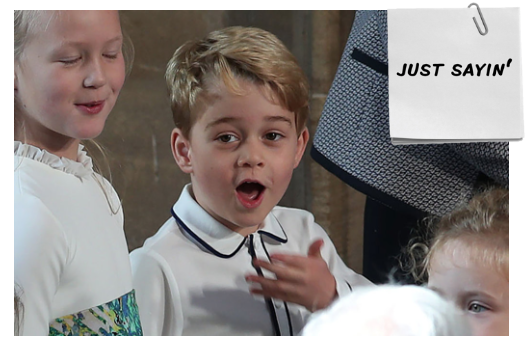 So 6-year-old Prince George of England got mocked this week on network television for loving ballet.

After telling us he will take classes in computer programming, religious studies and poetry, Spencer could barely contain herself when she had to include ballet on the list.

Yeah, we’re with you Rosie

Which then morphed into uproarious gales of laughter from the studio audience AND from GMA host George Stephanopoulos.  To which Ms. Spencer knowingly remarked, staring snidely into the camera:

I have news for you, Prince William, we’ll see how long that lasts.

I must confess that when I first heard about this I thought:

Oh Chairy, in the scheme of things, is it really THAT big of a deal.  I mean, look what’s going on in the world????

Not to mention, the f-n’ Rainforest is burning down and all those animals with it. Its destruction will destabilize weather patterns, threaten food production and cause…

I said POINT TAKEN!  To myself and, now, to you.

Nevertheless, and despite all my best efforts, I still can’t stop thinking about young George.  The idea that another little boy has to endure being mocked for wanting to dance or draw or sing or color… and on national TV no less….

What year was Billy Elliot?  2000?  That was almost TWO DECADES ago.  And we’re not even including the 2008 Tony Award winning Broadway musical.

But we’ve entered a 21st century renaissance these last few years, haven’t we?  One in which we have been tasked to re-fight and re-litigate all of those pesky social issues we thought we had settled way back in the sixties and seventies. 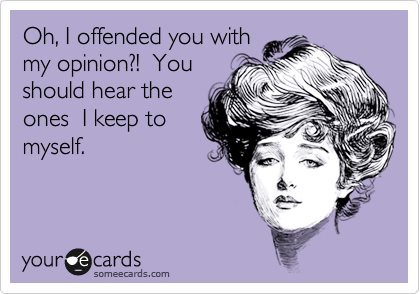 Oh we hear them loud and clear, believe me

Men have the right to be men, especially when it comes their business(ES).  In business, anything goes.  Pollution is not personal, only profits are personal.

How big is the Rainforest? That BIG?  So can’t we spare a few hundred miles so your father can make a living?  If he doesn’t have a job or a company, you don’t eat, our worldwide economy slowly goes into the toilet and our standard of living….

Well, don’t even get me started.

This is why it’s not cool to have important boys like George, future world leaders, wasting their time with… ballet?

I mean, what IS important or worthy of any productive future MAN’s attention??  Certainly not… grand jetés and rondelets. 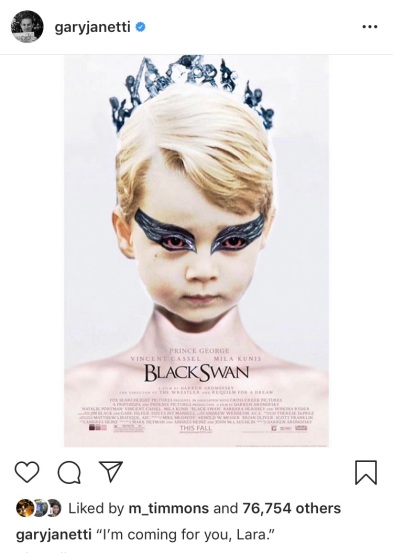 There’s a kind of insidious strongman sensibility circulating worldwide right now.  It seeks to define our aspirations, what we find valuable and how we define our behavior not only personally but towards the world and, most importantly, towards each other.

This is not about Lara Spencer, a woman who I never see on television and have no reference to other than at one time she used to host Antiques Roadshow. (Note:  Which in itself is proof she should know better).

Oh, and if truth be told I also once saw her on Flea Market Flip, a cheesy HGTV show I just remembered I watched five episodes of one lazy weekend afternoon before this current strongman nightmare started.

If only that show continued maybe she and I wouldn’t be in this pickle right now.

The show is still on, Chairy. #lol

Anyway, just like it’s now not okay to make fun of little girls who like to play basketball or soccer it’s now not okay to shame little boys who prefer to pirouette. Not only that but, mocking, shaming or snidely laughing at anyone of any age who loves to do something that doesn’t hurt anyone else is NEVER okay.

One would think this wouldn’t bear repeating but we seem to be living in a time when everything needs to be repeated ad infinitum, even the fact that you shouldn’t shame boys (or girls) under 10.

Though how are we to know that when half of the world leaders seem okay to hunt them, starve them, lock them up in cages or do worse.   And often right in plain sight, sometimes even on camera.

Is the affront like the one that happened to Prince George, earth shattering?  No.  Though once you really think about it, perhaps the answer is yes.

In the meantime here’s a challenge for Lara Spencer and all those supporting her, male or female:

Film yourself doing a proper twirl around the house to, say, Swan Lake, if you think it’s so easy.  We’ll be happy to post it here and let the public be YOUR judge.