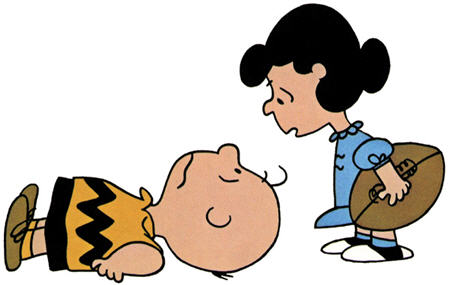 I will never play in the Super Bowl.  But that’s okay because I don’t want to.  First of all, there’s the matter of concussions.  If you’ve ever had one, which I have, you would never ever want to risk one again.  Unless you’re a professional football player.  Which I’m not – nor do I ever want to be.  As I’ve said.

As horrible as it was to have a concussion, and it was – partly because for months afterwards you feel like bright lights are the devil spawn and everyone is speaking to you from a faraway land in an only oddly familiar language (Note: Do not confuse either of these conditions with life in Hollywood) – it has also informed my life in many good ways.

I walk much more carefully down slippery floors, treasure almost every moment I can concentrate for more than 5-10 minute stretches at a time, and literally bask in the knowledge that not being good at sports like football no longer makes me a nerd but a wiseacre who knows how to play the long game of life.

I can be flip about all of this now because my “concussive” and “post-concussive” days happened approximately 20 years ago and feel like a chapter out of someone else’s past life.  However, this was not the case at the time.  Like a section of a good, classic novel by someone like Charles Dickens, the moments can be re-read or relived with a sense that this is the moment that will exactly define our main character (us?) forever.  That it is this dramatic occurrence, or this particular occupation, or this specific life circumstance that is who this person IS and primarily ALWAYS will be. 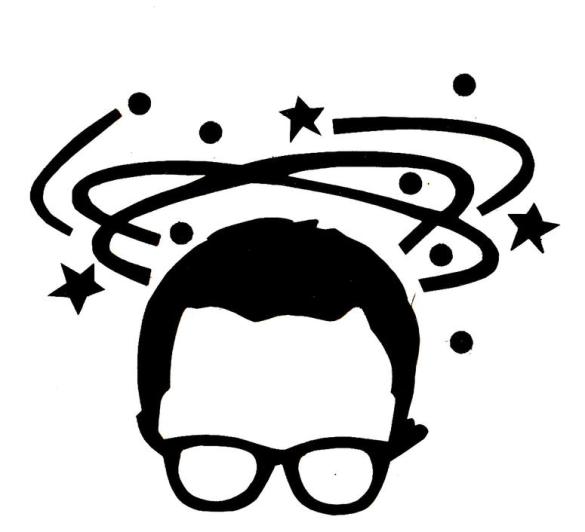 My life in clipart

But in the case of the novel, that is only because Dickens was an exceptional writer who can make us believe it to be so — until he unveils yet another twist and turn in his story that will take his reader on yet another path.  In real life, we have the choice of a writer EVERY DAY to rewrite our chapters and redefine the focus of our existence.  That’s why the stories of lives are much messier than the stories of books, plays, screenplays or short stories.  We create our own dramatic structure (some would argue that many good writers also do this but that’s the subject of another discussion) and don’t have to amuse our audience – only ourselves.  We’re free to have our chapters go off on tangents, or have our main character make seemingly inexplicable and unsatisfying decisions, and to do both for as long as we choose despite the best advice or preference of others.  In fact, we can keep doing the ill-advised and never learn a lesson until the day we die AND we can do it all and still be an unsatisfying anti-hero because we have chosen to have our lives have no overall dramatic point WHATSOEVER (though it might serve as a lesson of what not to do for someone else, but there’s no way of controlling that).  In short, we can screw up, do the unexpected, chase dragons we never slay AND have a great or bad time doing all of it if we decide to do so.

Yet the ONE area where our lives are EXACTLY like a well-constructed story is this – every single action or decision or job or mini-life that we live will cause another future action that we take or a detour that we seemingly spontaneously choose to travel down.  Just as my concussion caused me to change the way I glide upon shiny surfaces, or to appreciate my intellectual life as a non-football player, your horrible job experience with the boss from hell in a given field can cause you to change career directions to pursue something else, enable you to bear down and speak your mind and create a change that will steer you to a more preferred position of power in this same field, or perhaps free you to focus more time outside your work life which will then cause you to meet the love of your life – or the lover who will forever change your life.

In writing classes this is a simple concept called “cause and effect.”  Meaning every decision a character makes – every single one – opens some small or big door for something else to happen – something inevitable that would not have happened if that small or big door had not been pried from its resting place earlier.  Syd Field, a much unfairly maligned screenwriting guru from the seventies who taught me quite a lot at one period of my life, rightly compared this to the scientific theory of Sir Isaac Newton’s laws of motion.  Neatly summarized in non-scientific language – for every reaction there is an equal and opposite reaction.

It has come to my attention as a teacher of college students and a professional writer in Hollywood, and as a mere human being, that many of us still don’t exist as if we believe this – for both good and bad.  But here’s the dirty truth:

Nor do we want it to be.  Cause and effect is a kind of magic – one that goes along with making choices and not knowing what the result will be.  Not every choice will have a big, opposite reaction or, if it does, it may not set something big in motion that is recognizable until many years or even decades later.  Or – it might.  But that seemingly bad choice now might turn out to be a good one, or a good lesson, in hindsight for you and who you are.  That is why I spend a lot of time telling my students, and myself, that truly there are no wrong choices – only choices.

I mean — I and others might not understand why you could ever think the first season of Smash is well-written but heck, maybe it’ll lead at least one of us to write a better musical for TV one day – or at least a cool piece of journalism of what the blankety-blank went wrong with a show chock full of so many accomplished professionals. 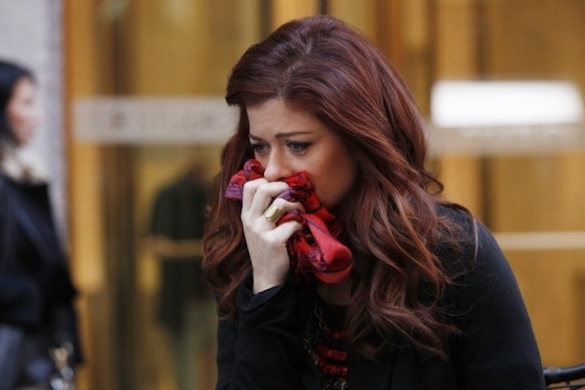 Don’t worry Deb, we smell it too!

At the very least, perhaps it will inspire me to re-examine my love of Broadway – or even television – and become an opera or ballet aficionado.  After all, one man’s train wreck, is another one’s object d’art.  Or wrecking ball.

You might think what you are doing right now in your life is unsatisfying and ultimately insignificant, or so perfect  that you are positive you will be doing just this forever, but – quite simply –  that is mostly not the case.  Sen. John Kerry, who I voted for but am not a groupie of, acknowledged this some days ago when he spoke to the Senate and the world as a senator one last time just as he was formally confirmed to follow Hillary Clinton as our next US Secretary of State.

Choking up as recalled his long career as a Massachusetts senator and remembering the names of two even more famous politicians from his home state who came before him, he admitted:

“Standing here at this desk that once belonged to President (John F.) Kennedy and to Ted Kennedy, I can’t help but be reminded that even the nation’s greatest leaders — and all the rest of us — are merely temporary workers.”

To embellish on Kerry’s statement, and why not – add one more thing.  His presence in the Senate is no different than anyone’s presence in any particular job.  We’re all, all of us, doing temp work.  In fact, we are all also temporary.

Sure, but Kerry’s going on to be freakin’ Secretary of State from being a senator and I’m stuck in a dead end job getting coffee, or a dead end relationship not getting much of anything at all, you might argue.  Well, to that I say – how do you know how it’s going to turn out for him?  Or you?  This is just one moment among many for the man who lost the presidency to, uh…..George W. Bush just eight years ago.  To repeat, like many of the rest of us, he lost to George W. Bush! 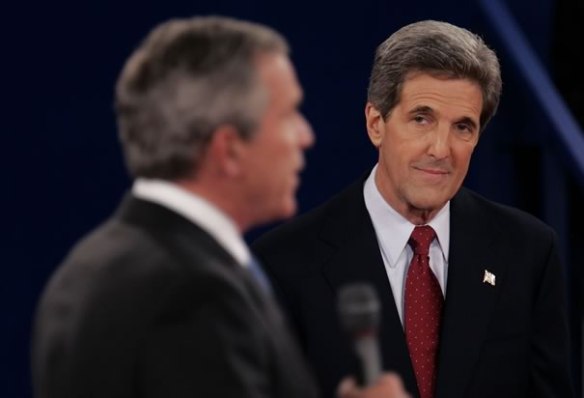 Was it my wife?? Really?

Here are some other salient facts about a few random people you might have heard of to take into account.  Did you know at one point in time Andrea Bocelli – the Italian opera singer who was blinded at 12 years old after a football accident, AND has sold ore than 80 million albums worldwide, AND someone who you might find annoying or brilliant depending on your personal POV – was at one time thought of as a….court appointed lawyer??   Uh, yeah, that was what he did in his twenties.  You might also want to consider that at age 12, after his football accident, he was also merely a kid in Italy whose parents so wanted him to see once again that they allowed his doctors to desperately resort to treating him with…leeches?  I’m not kidding.  Were the leeches or the law merely side roads or did they in some way contribute to who this guy is today – well, only Dickens could probably be worthy of connecting the dots story-wise on that one – or would care to.

Want more?  Well, you know that Harrison Ford was once merely the hunky California carpenter next door who was married with a kid, and a part-time actor, until one day he happened to be working for a guy in the film business named George Lucas who decided to cast him in a few movies? (uh – Star Wars, for one).  Or that Marla Gibbs, the iconic sassy TV maid of the 1970s and 80s as seen on The Jeffersons was primarily known to friends, family and many other co-workers as a sassy airlines employee– a job she kept for the first three years of that hit series. 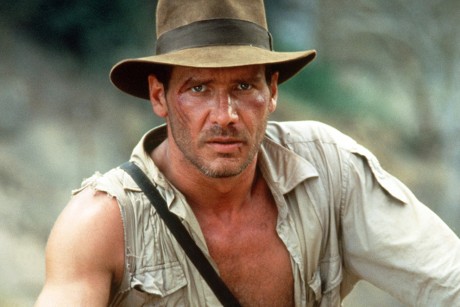 Yes, in this scenario you are Indiana Jones (you’re welcome)

Obviously, I could go on with a lot of examples.  Plus, we haven’t even gotten into what will happen or not happen in five, 10 or 20 years to your doctor, your waiter, the gardener down the street, your American Idol, the real life and fictional stories as told and lived by your favorite writer – me, Lindsay Lohan (let us pray) or — you.

It’s easier to use celebrities to illustrate this point because they seem bigger than life and it’s rules.  But they’re not.  Nor, are any of the rest of us.  Which, in the end, could be a very good thing.  No matter what you think of the decisions Martha Stewart has or has not yet to make.