I’ve decided to wait a bit to see Joker.

Not that you asked and not that I’m afraid to venture out to a movie theatre showing Joker on its opening weekend.

Oh, yes.  Apparently, there is reason to be afraid.

My students actually brought this to my attention, noting more than several sets of their parents called them this week to warn them of the perils of venturing out.  These were mothers and fathers who were truly afraid their college juniors and seniors could possibly be shot at in a public venue that dared to show a movie that addressed the evolution of a cartoon villain into a gun toting vigilante who wanted revenge. 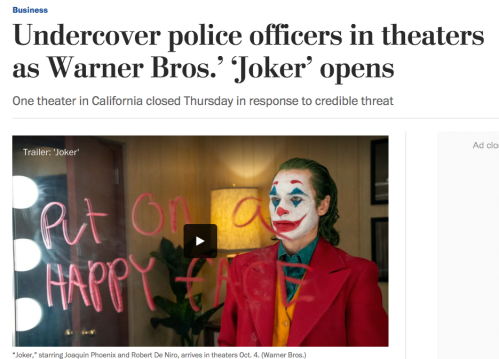 But it never even occurred to me to be scared and I have fears about pretty much everything.

Not being a parent and never one to miss the opening weekend of a movie I was desperate to see (Note:  Yes, I did see Judy on opening night.  Please.) I thought of venturing out to Joker.  But it wasn’t the prospect of the ridiculous crowds that go hand in hand with those huge box-office projections that made me stay home.

Reserved seating ensures you don’t have to wait in line for a ticket and I was willing to take my chances in the off chance of a flesh and blood gunman given I survived the eighties.  But, well, the rat f-ck in the parking lot, the talking in the theatre during the film, the inevitable crying kid who shouldn’t be there or texting teens with neon-screened phones who have to be there– I mean, really, I can wait.

I’m fine with this

And anyway, Martin Scorsese says any film that’s part of the Marvel Universe isn’t real cinema so I doubt that he feels any differently about DC/Batman origins.

Honestly, the closest I can think of them, as well made as they are, with actors doing the best they can under the circumstances, is theme parks. It isn’t the cinema of human beings trying to convey emotional, psychological experiences to another human being.” —  Martin Scorsese to Empire magazine this week.

Scorsese throws it down

If Scorsese is venting about high and low art we moviegoers are really in trouble.

Still, I get it, don’t you?  A steady diet of anything eventually makes it less special and inevitably, less than satisfying.  So how frustrating must it be for someone who is acknowledged as one of the best filmmakers of the century to watch the market for what he produces narrow further and further.

It’s the slow execution of everything he has given his life to.  The existential extinction of a widespread and very particular art form.

On the other hand, (and quite honestly) I can’t say I’m excited to see another Scorsese gangster movie, are you? Really excited?  I mean, are you really, really excited about the release of his latest three and a half hour long epic The Irishman early next month?  As excited as you were to see Goodfellas, Casino or even, say, The Departed?  Be honest.

A superhero movie fan could argue a new gangster film from the director is the cinematic equivalent of a Scorsese theme park ride.   Others might, too.

This in no way lets the glut of Marvel/DC comic book movies off the hook.  Looking at what’s playing at what we used to refer to as real movie theatres at any given moment is a far, far cry from the last true golden age of cinema in the late sixties through the early to mid-seventies. 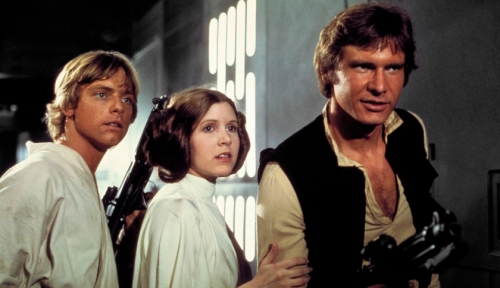 You know… before this #imissyoucarrie

The entertainment business has always revolved around making money, especially easy money.  So no one can blame movie studios, producers, directors, actors, et al for focusing on the broadest possible market with an emphasis on the key 18-24 year old demographic.

It’s said studios are most interested in a four-quadrant film, meaning the movie that will appeal to the widest swath of the population (Note:  What quadrant are you in?) but this is no longer the case.  It’s not even the case that whom they want to most appeal to are 18-24 year olds.

Most people when they go to a comic book movie #ifeelold

What is true is that superhero films accounted for more than 25% of total movie ticket sales last year, the equivalent of $11.38 billion.

Truth be told, this is a lot it is still far less than what we (okay I) might have imagined.  Until we realize, large as it is, it’s still a misleading statistic.  Those films might account for a quarter plus of releases but how wide of a release do the non-superhero movies get and how long do they really stick around?

In other words, 75% of the movies we have the option of going out to see might not have anything to do with Marvel or DC but if these films only play just one or two weeks in smaller, not easy to get to (or particularly desirable) theatres in not many cities, than what are the chances any of us will get to see them?  If a comic book hero is monopolizing 5 screens at an 8-screen multiplex do you want to brave the crowds on the weekend in order to see the latest indie offering starring Catherine Keener?  You might not even show up for a Jennifer Aniston rom-com or a Spike Lee joint.

Forget about the cost of a helmet or your bulletproof vest.

This is especially the case if you can wait a week or two and view them in the comfort of your large screened living room, which, in some cases, will offer images almost as large as the ones you might be treated to at one of the smaller multiplex screens that the non Marvel/DC movie you chose to attend would be relegated to.

It’s not an accident that Martin Scorsese’s The Irishman is backed by Netflix, which will make it available online three weeks after it debuts nationwide at what Steven Spielberg refers to as real movie theatres.

in unison: “you talking to me?”

What he actually said is that Netflix films (and those from other streaming services) should not receive equal treatment at the Academy Awards and should be nominated for Emmys.  His belief is once you commit to the TV format you are a television movie and not a film.

But does his point of view extend to movies primarily backed or financed by Netflix and other similar platforms?  Or does Scorsese’s The Irishman get a pass because clearly HE makes cinema?

As famed multiple Oscar winning screenwriter William Goldman once said of those of us in and around the film business, nobody knows anything.

And that, unlike most of what’s offered at your local multiplex, includes everyone.

The Late Ones – “The Joker” (cover of Steve Miller Band)