The Chair is taking a seat this week. Rest assured he’s doing well, and the only thing he is sick of is cable news and news in general (though he still has love for Rachel, because, well, duh). Like many Chairs around the country, he is writing and reading and discovering every limitation of distance learning (including his hatred for the term “distance learning”).

But he couldn’t go a week without sharing some pop culture bit that will lift your spirits and distract you from… well.. everything.

Without further adieu — the thing we all needed and didn’t know we needed it: a tour of Patti Lupone’s basement.

I heard somebody wanted to see more of my basement. 😘 pic.twitter.com/fBea7emR6h

So little time, but so much to show you! pic.twitter.com/W2nz6emFFz

The Chair is currently spending the weekend in NYC — with an itinerary chock full of Broadway shows (of course). He’s going to have a lot to report on…. stay tuned.

Till then, enjoy this song from Hadestown — which has taken on extra meaning since the Chair first heard this song while he sat just a few rows behind 2016’s Popular Vote President. Take a moment to soak that in.

“Why We Build The Wall” – the cast of Hadestown

While the Chair is busily finishing up his semester (also known as: reading scripts until the next millennium), enjoy today with your moms, stepmoms, aunts, sisters, godmoms, like-a-moms, and really, any woman that you love.

Speaking of women the Chair loves… have you seen the new trailer for Judy? Yes, that Judy — the one with Renee Zellweger. Yes, Renee. Zell. Weger.

You know the Chair has thoughts on this… Stay tuned for more. 😉

Occasionally the Chair must break from his weekly posts to address up-to-the-minute breaking news… and sometimes he just has an opinion and he can’t shut up about it. Enjoy this mid-week visit with the Chair as he spins his truth on this year’s biggest Emmy moment.

The takeaway from the Emmy Awards on Monday night is not about Breaking Bad deservedly sweeping in almost all of its major categories. Nor is it the fact that Emmy stalwarts such as Modern Family, Julia Louis-Dreyfuss (Veep), Jim Parsons (Big Bang Theory), Allison Janney (Mom, Masters of Sex and previously West Wing) continue to dominate in all of theirs.

It’s not even that the presumed-to-be sure-fire dramatic TV-movie winner of the year – The Normal Heart – was snubbed in all of its categories until the very end.

And no – it certainly is not that the usually smart, glib and poised in just-the-right-way host Seth Meyers delivered an unusually static set of jokes that made him and the entire show seem a bit off its game.

What it is all about are three minutes and one half minutes of special material that fell flat. And…

Clearly, many people do not feel comfortable with or understand that Ms. Vergara’s success is based on the idea that publicly she ALWAYS plays the part of a beautiful and funny woman from Colombia. And that despite what the writers name her in whatever venue she presents herself, that persona is ultimately always named Sofia Vergara and has as much or as little to do with the real her as… well… only she knows for sure.

But here’s what we should all know: that is what actors do.

For those unfamiliar with the segment, Ms. Vergara strutted out clad in her usual body-hugging garment and speaking in her exaggeratedly extreme Latin accent (Note: As thick as Fran Drescher’s but evoking Colombia rather than Flushing, Queens – the latter being my home town). After explaining to the audience that she came to America with the same big dreams of many young women her age– to be on a stage as big as the one she was standing on at the Emmys – she then disappointedly noted that this also relegated her to the duty of only being able to introduce from that very stage Television Academy president Bruce Rosenblum.

Quickly making his entrance and taking away center stage was Mr. Rosenblum, who if nothing else is Central Casting’s version of what most everyone around the world imagines television executives to be. Which is to generously say that he is not at all a performer or else he’d hire himself and his colleagues instead of paying actors like Ms. Vergara millions and millions and millions of more millions of dollars each year.

This also appeared evident as Mr. Rosenblum took the reigns of what now promised to be on ongoing routine and asked Ms. Vergara to stand on a rotating podium center stage – not unlike that of a real-life version of an actual Emmy – and demonstrate for the audience the meaningful impact American television has around the world.

As Mr. Rosenblum blathered on about something to do with charitable foundations, diverse audiences and more devices and platforms than ever before, the spotlight was on the 360-degree view of Ms. Vergara as she slowly rotated and milked every single moment of the routine with all the skills of the multi-Emmy nominated comic actress that she is. Let us just say Ms. Vergara held nothing back in terms of “body language” and this made the routine far more or less amusing depending on who you were or what your point of view was or is. Especially when Mr. Rosenblum concluded television’s success is always about great storytelling and giving viewers something compelling to watch.

I will admit to being amused by Ms. Vergara and how willing she was to poke fun at her sexpot image and pose as some living statue of – something – while a boring man – who stood in for all of the many boring men I pictured watching at home – talked on obliviously about stuff no one really wanted to listen to despite his determination to continue boring them. I mean, isn’t this something that most guys, including myself (and maybe even at this moment) routinely do?

That is not the way many of the women close to me, or the tens of thousands of other people on Twitter and various alternative platforms and devices, viewed it, however. Charges of TV Academy sexism quickly abounded, celebs like Katie Couric voiced their disapproval, and pundits much more powerful and wider read than myself posted think pieces and visual aids about feminist representation. Most also mentioned the irony that some moments after Ms. Vergara exited, Julianna Marguiles accepted a best actress Emmy in a speech that boasted how we are currently living in a “golden age of television ” in terms of roles for women.

It’s difficult to know what to think of all of this and clearly impossible to prove those thoughts since this is all about a matter that is subjective – or more rightly – objective-ication.   In fact, one of my female friends argued that if a gay guy were presented center stage in the stereotypical throwback way that Ms. Vergara had to endure, I’d completely change my tune. Not true, I protested. If they put Neil Patrick Harris in a speedo on that podium – the most famous and attractive out TV gay I could think of – and twirled him around as he cleverly camped on his own terms (the key word being clever) – I’d think it was funny. But not if some random gay reality TV show guy who was not as funny or quick as Mr. Harris (Note: Take your pick) tried it. There’s a difference.

Unless it’s this reality show gay, in which case, MORE BILLY PLEASE

Well, that didn’t work. They didn’t believe me. And really, how do I absolutely know for sure? All I was probably thinking about was seeing Neil Patrick Harris in a speedo on a podium. Which, in a strangely symbolic way, is how all of this began.

I guess it’s all about choice and history and perspective. And who or what you find funny. Though what do I know: for my money, Amy Poehler and Lena Dunham are the best comic actresses on TV – not Julia-Louis Dreyfuss. Not to mention Louis C. K. and Andre Braugher make me laugh a hell of a lot more than Jim Parsons or Ty Burrell.

This is a very long way of saying – what’s funny to me may not be funny to you. And, vice-versa. And it may very well be offensive to somebody. Hopefully.

This is our rare Stop the Presses post.  For those times when even the Chair feels compelled to speak mid-week.

The national zeitgeist exploded this weekend with three huge stories – well, actually two huge stories and a third that promised to be.  They were:

In case you were wondering, the Super Bowl emerged as the one unexciting non-story of the three even though it turned out to be the most watched program in television history with 115.2 million viewers.

But there was little excitement watching the Seattle Seahawks trounce the Denver Broncos 43-8.  How could there be when the winner of a contest is never in doubt?  It made even the commercials feel dull and expected.

Not so with a lifeless Mr. Hoffman, found slumped over in the bathroom of his NYC apartment with a needle in his arm and up to fifty baggies of heroine on the premises.  Nor was it the case with Ms. Farrow’s riveting written outcries and accusations against Mr. Allen and the litany of beloved movie stars who still choose to work with him, as posted  on Nicholas Kristof’s NY Times blog.

We don’t like dull and expected, at least in this country.   But we do love a good celebrity anything.  Which is the primary reason why the zeitgeist is still reeling, and will continue to do so in the foreseeable future, from Mr. Hoffman’s demise and Ms. Farrow’s grizzly tale of personal family drama.

I don’t mean to sound heartless or unmoved by these two tragedies.  They’re awful, and tragic and worth any series of emotional, physical or verbal reactions people are throwing out onto social media or in person to friends and family.  And I count myself as one among those people.

They. Happen. To. Everyone.

Drugs?  Sexual abuse?  This horrible stuff is in the news daily.   Plus, we already knew that Mr. Hoffman has had severe drug problems in the past and as recently as six months ago did a stint in rehab.   We were also aware for years Ms. Farrow and her family believed Mr. Allen sexually abused her and that in the last three months both her mother Mia Farrow and her brother Ronan Farrow have publicly taken to Twitter and Vanity Fair in order to advance Dylan’s accusations back onto the national stage against the seemingly constantly lauded Mr. Allen.

The only real connection to the public zeitgeist here – and it is not shocking at all – is that both of these stories involve celebrity.

We all have a very screwed up idea of what it means to be famous, privileged, wealthy and/or talented in this country.  And it’s only getting worse.  But here are some truisms I try to remember after many decades working among them in the business called, not coincidentally, show.

The L.A. Times’ Kenneth Turan on Monday published an appreciation of the many brilliant and diverse roles the mega-talented Mr. Hoffman played in the movies and onstage in his 46 short years.  The headline of the story read: He Could Be Anyone. 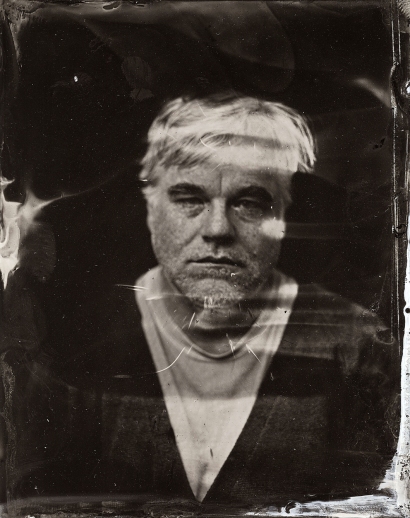 This did much more than address Mr. Hoffman’s talents for transformation as an actor.  It commented on his death, Ms. Farrow’s past traumas (change the pronoun to “she”), and on any number of public scandals we’ve become fascinated by in each passing year.  Just like the story of what happened to your friend, relative, or casual acquaintance from the neighborhood or office, there is no simple answer as to why.  Nor is there a truly satisfying explanation for any of it