…I’d trade all of my tomorrows for one single yesterday…

Nostalgia is in the air.

You can see it every time another superhero movie has a HUUUUUUUUGE opening. I’ve seen it as a college professor for more than a decade with my film students’ almost universal, fanatical fascination with all things Star Wars.

I thought growing up meant I’d never again have to feel marginalized for the big yawn I felt whenever a friend tried to tempt me into the Marvel or DC comic world.

Little did I know the pressure would be compounded by a perfectly enjoyable but to my mind not particularly deep 1977 film that would not only refuse to die but haunt pop culture for the rest of my life on planet Earth.

Me, talking about Star Wars #overit

Yes, I’ve always preferred the real world to a fantasy from the past.

Look away or backwards for too long and you might miss the danger right before you in the present.   Or the pleasure.

In that sense, you could color me realistic.

But realism is not so popular right now in particular.

You can see this in our politics.  Like it or not, Trumpism is a banshee scream to right the ship (Note: Literally) and make things the way they used to be in the good old days.

It is nostalgia for a past that is simpler, more prosperous and a lot more black and white.  Though to my mind it’s really white and black.  Meaning White first, and then, well, maybe just a little Black, for what remains.

For what else is one to think when perusing what America realistically was in what we now recall as the good old days. 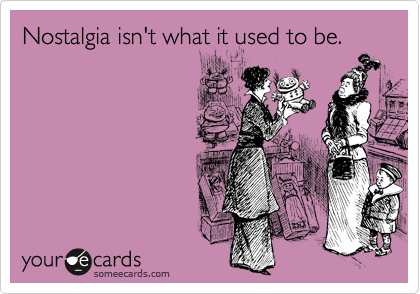 Nostalgic for nostalgia? Hey, it could happen.

Though in fairness, this phenomenon is not alone limited to the U.S.  A new brand of White Nativism – which sure, some scholars refer to as nostalgia – has spread all throughout Europe and beyond.  So much so that one day, generations from now, the future scholars will surely look back to the first half of the 21st century as a time when the world had to choose between embracing the past or vaulting into the future and chose —

Well, that remains to be seen.  But I, like you, have some very real thoughts on the matter.

This is why it surprises me at just how big a fan I am of the recently dropped season 3 of the ultimate nostalgia machine, Netflix’s Stranger Things.

As a Chair whose taste runs afoul of mythic pasts and the heroes who triumph in them, how is it that the greatest relief I’ve found from TrumpWorld in the last year is following the exploits of a group of kids from the type of suburban neighborhood I never lived in during what I consider the absolute worst decade in the history of my life thus far– the eighties???

I’ve been considering this all week and have not yet come to an answer.

There was really nothing much fun about the eighties.  Just look at the fashions and you can see how much we hated ourselves, and each other.

This was heartthrob hair. For real. #ohBilly

It’s one thing to go to a costume party today with giant shoulder pads and too short short-shorts but it’s quite another to be expected to put them on every day after you’ve teased and moussed up your hair into a humidity-defying frenzy.

What sane human being who lived through those times would crave that?  What kind of insane population would ever popularize that?

These are questions much too big to resolve through the enticing world view we’re given in ST’s third and best season.  Though through a strict storytelling lens, it’s pretty clear.  The appeal of the latest ST incarnation is that in its own small way it manages to evoke the best of nostalgia, fantasy AND reality.

The world of monsters and evil foreign/governmental villains might steer the overarching plot but what we really relate to is the stunningly imperfect humanness of the characters the Duffer Brothers created and the behaviors of each actor playing them.

Every one of its principal characters is on the surface central casting for the non-hero supporting role in any movie or comic book adventure.  Each in their own way is either neurotic, ill-tempered, phony, depressed, bookish, dumbly amusing or just plain unappealingly awkward.  In short, they are a group comprised of the last ones chosen for any sports team combined with the first ones suspended from every sports team.  (Note: And I wonder why I relate?)

And yet, in watching each of them get their moment as they’re thrust center stage and dared to become heroic, we find ourselves somehow rooting for them in what could objectively be considered the most ridiculous of circumstances.

To create tons of believable scares when you’re being chased in a _________________ by a giant gooey _________________ is a tough enough hat trick to pull off.  But to do it in a decade that is already an overused sad parody of itself and get us to actually believe any of those people could actually exist is something else entirely.

And yes, there will be no spoilers here.

That is, for the handful of readers who have yet to tune in.  For the launch of ST’s season 3 has set a new record for Netflix, attracting 40.7 million household account viewers in its first four days, almost half of which were viewed on TV screens on its launch over the Fourth of July weekend.  The only show on TV that was more watched during that time was when real-life superhero Megan Rapinoe lead the US women’s soccer team to victory in the Women’s World Cup.

Though I was not one of those who watched ST in it first four days, I will cop to binging it in two perfect four-hour sittings over two nights a week later on my big red sofa with tortilla chips, guacamole and my dog in my lap.  For me it was not so much nostalgia as it was pure decadent escape from the continuous loop of a news cycle that at times has become simply unbearable.

Which, even more strangely, probably puts me at the center of the very definition of nostalgia – a longing for a past or a place with happy associations.  It might not be exactly my past or my place/town onscreen but, well, facts are facts, even in today’s world.

Gosh, I hope not.  Since my husband just walked in the room and, hearing I was waxing nostalgic about nostalgia, reminded me that a Swiss physician first coined the term back in 1688 as a psychological disorder similar to paranoia, except that the sufferer is manic with longing.

For what exactly, I’m not sure.  Nor, I suspect, are most of the rest of us.