It’s not simple to process Memorial Day in a year when many of us are wondering what it means to be an American.

Some of us might choose to see it as nothing but a long vacation weekend to ignore our world and all of its problems and simply choose to party with friends, relatives or simply ourselves.

That is a more than valid plan.  In fact, probably the safest if everyone will adhere to leaving politics – nee Trumpism – at the door.

No, don’t turn on the news!  Don’t even touch that:

And DON’T BRING UP THAT SUBJECT!  I told you before you got here, WE ARE NOT TALKING ABOUT THIS!  If you are going to talk about this, you can just GET OUT!!!

Since I don’t have either of my two Moms to implore that of me anymore, only a husband who has long ago stopped trying to fight an uphill losing battle, I decided to ponder the question myself.

Memorial Day, which was called Decoration Day when I was growing up, was, once upon a time, not political at all.  It was there simply to honor the men and women, past and present, in the military.  People who signed up to preserve the idea of a country whose principal mantra is…well, what?

I was going to say freedom, a melting pot of international cultures, two welcoming arms to all those in persecution wanting to start a new life since that is all you need to become an American but see…

Well, already I’m in trouble because this has quickly gotten political.

That being the case I turned to the one person in pop culture who these days seems to cross political divides (sort of) through music to tell the stories of what it is really like to be an average small town American with regular working people as friends, family and relatives who can provide all the lessons you will ever need from which to build a fabulously happy, healthy, kind and prosperous American life — 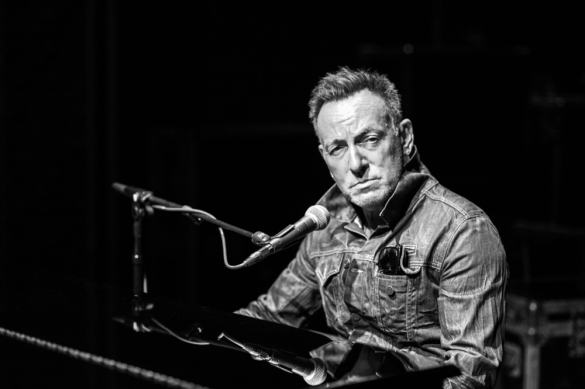 Only he can pull off a full denim look

At my sister’s urging I caught up with his Netflix special, Springsteen on Broadway, this weekend. It is essentially a stripped down version of the key Springsteen songs that tell his life story in the way he wants to show it to you.

Yeah, we don’t call him The Boss for nothing.

Still, there is a lot – TONS – to take away from Springsteen on Broadway if you want to feel really good about being an American and honor those in the military.

In one key section, he poignantly speaks of several local New Jersey rockers who he looked up to in awe that were killed in their prime while serving in Vietnam.  Sure, it’s funny, lovely, sexy, nostalgic, even tear inducing.

But that’s not what really gets you to this holiday.

What immediately brings you in is the very beginning where, standing center stage, in nothing but his jeans, t-shirt and guitar, an almost 70 year-old Bruce admits to you that he’s a fake and a fraud.

That his whole persona is nothing more than an IDEA.

Wait.. this was really his butt though right? #ineedanswers

A magic trick that has you believing that a guy who never held a regular 9-5 job in his life, never did one day of hard labor and certainly was much more familiar with a the inside of a rock star suite on Sunset Blvd.  than he was the inside of any factory in the USA, could be the quintessential American working class hero.

As he freely admits from the get go:

We might take that as a perfect metaphor for the times and for this Memorial Day but pretty soon we realize there’s a lot more to him than that.

It is Springsteen and America’s brilliance that their mutual personae are indeed simply an IDEA, but an idea that is based on SOMETHING.

Words that we aspire to and/or people who have inspired us.  Sometimes in moments when we didn’t even know it.

It was Springsteen’s Dad who was the hard-working factory worker who supported a wife and kids on a union salary and spent too much time at the local bar trying to unwind.  It was Springsteen’s Mom who had the upbeat, can-do, music/dance-loving American attitude of doing unto others as you would have them do to you and always, always doing your best.  It was the many people in Springsteen’s small town, by the Jersey shore before it was “the Jersey Shore”, who lived the many stories he wrote about. 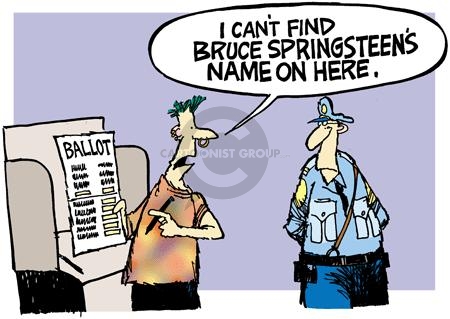 He would have beat Chris Christie

And it was also all of the above that he sought so desperately to get away from only to wind up, as he tell us, wildly and ridiculously successful and, yet, still living within 4 miles of his childhood home.

His overriding point is that America has, for better or worse, always been an IDEA forged by the people in it and an ever evolving one depending on what those people at the moment chose to do with who and what they were raised around.

To see those that served to defend it in any other way is to not acknowledge both the HAT TRICK and MAGIC of the idea.  The notion that you can literally be born into anything and succeed far beyond your dreams if you’re clever and lucky enough.

Or be born into everything, or well, a lot, and in your own eyes (or others’) be a miserable failure.

Or fall somewhere in the middle, put upon and never quite satisfied with so many of the promises unfulfilled. 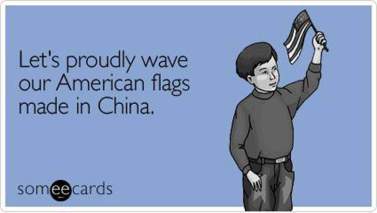 It’s OK to be confused

We all have our own American stories.  Certainly mine had nowhere near the stability and opportunities available to a straight white man born in Bruce’s era and environment.  Though undeniably I was far, far more fortunate than the majority of others in the country, particularly those non-white and non-male.

To honor the many before us who fought for our rights as Americans is to understand that it is only in the true collective WE that we will continue.  We the average factory worker and we the exceptional rock star and every other WE that falls somewhere in between.

To pretend that any of this extremely large, often unmanageable group is an OTHER, or that a very good part of our journey is not pure luck and bullshit combined with only mere dollops of perseverance, talent and hard work, is to miss the entire point of our country completely.

“Born in the USA” – from Springsteen on Broadway