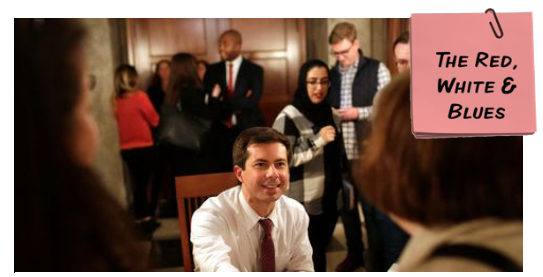 First and foremost you need to keep going.

If the country is to again believe America is truly a land of opportunity, well, what better way to illustrate that than becoming the youngest president in U.S. history, the first openly gay POTUS and the only person to be elevated from small town mayor to the highest office in the land?

Your story literally sounds like a pitch for a major studio remake of Mr. Smith Goes to Washington targeting the millennial generation.

Or is he exactly what we need?

Of course, most of us realize the country that up until recently sold itself as a place where anything is possible for anyone was never really quite that way.  We’ve been too racist, too classist, too homophobic and too corrupt at the top levels of government for way too long.

On the other hand, it would be a mistake to say that everyone and everything is innately evil.  More than anything, that is what your nascent, seemingly impossible presidential campaign shows us each day.  If a Democratic gay guy can twice get elected mayor of a Republican town (Note: The last time with 80% of the vote) in Mike Pence’s home state, um, what else might happen?

The bad punch line from 2015 would be:  Donald Trump will be president???

The good punch line from 2020 could be:  Guess what, we’re playing The Scissor Sisters at the inauguration and you WILL be watching two men (he and his husband) canoodling.

the cuteness is almost too much (they have TWO dogs) #icant

Which is a signal to open this letter up to everyone.

For those who think Pete Buttigieg (pronounced BOOT-edge-edge) probably has as much chance getting the Democratic nomination for president as I do, perhaps you’re right.  Or perhaps not.

You need to have at least 65,000 money donors from 20 states or to register at 1% in three national polls to participate in the upcoming blue fate special.  After a recent CNN Town Hall and only the very beginnings of his cross-country travels, Mayor Pete has surpassed that level on both scores.

So, who is this guy?

A Harvard graduate, a Rhodes scholar and a former Navy intelligence officer and Afghanistan war veteran. 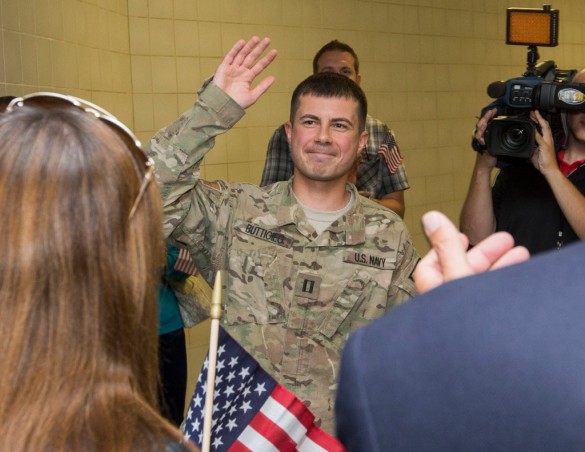 A mayor who took over a city losing residents and money with the promise he’d revitalize downtown and raze or refurbish 1000 houses in 1000 days who accomplished that goal 63 days early and began attracting lots of new residents, new money, new jobs and new industry into the community.

A candidate who supports the Green New Deal as a good start to tackling climate change, backs single payer health insurance only if the insurance companies play a role and sees the immigrant population as a cornerstone to our success.

He’s also pretty good on Twitter (Note: A key skill in the battle to be POTUS in 2020).   When would-be Starbucks chief and fellow aspiring independent presidential hopeful Howard Schultz recently declared he’d spent more time overseas with the military than any other candidate running, Mayor Pete quickly shot back:

I remember a Green Beans Coffee at the exchange at Bagram, and a decent espresso machine run by the Italian NATO element at ISAF HQ. But I don’t recall seeing any Starbucks over there… https://t.co/GOkL8Li3r8

These alone are not qualifications for the White House but they certainly bode well for someone seeking a place in the national conversation.  The transcript from his recent Town Hall provides further evidence.

Slaying it on CNN #GoMayorPete

So does the open letter he made sure to send out to the Islamic society that represents South Bend’s Islamic community right after the white supremacist terrorist attack that killed 50 people and injured 50 more in New Zealand mosque last week.  Suffice it to say it starts with:

…This city is deeply committed to your safety and well-being, continues to state this entire City wraps its arms around you in love and peace, and goes on from there.

As for his views on numerous other issues, here’s some research courtesy of various sources, including PBS, NPR, CNN and The Washington Post:

A national security threat and long-term problem for future generations.

And along with 407 other mayors he signed a pact to adhere to the Paris climate accords that Electoral College POTUS Trump pulled out of.

Consistent criticism towards Trump for conducting foreign policy by tweet, support for withdrawing U.S. troops from Afghanistan and commitment to keep troops in Syria.  He also sees Iran as the single greatest threat to Israel in the Middle East.

A supporter of universal background checks and critic of allowing guns in school and purported Stand Your Ground laws.

On the Electoral College and the Supreme Court:

An advocate of a constitutional amendment to abolish the Electoral College (including an openness to look at alternatives so smaller states are not left behind) and author of a proposal to expand the Supreme Court to 15 justices from nine.  The latter plan would allow would allow Republicans and Democrats to each appoint five justices, who would unanimously agree on the remaining five appointees.

His website and his numerous more frequent television appearances reveal a lot more.  But perhaps the most revealing and refreshing quote that seems to get inside his decision to run is the mere fact that more than any other candidate he has skin in the game.

Is he too much of a long shot?  Hell, yes.  Is it pie-in-the-sky to think the guy has a snowball’s chance in hell of being elected?  Maybe.  But we’ve been a lot more surprised and done a hell of a lot worse.  I haven’t made my final decision now that there are 20 plus candidates in the race but this much I know:

The possibilities are limitless.  ON BOTH SIDES.

Mayor Pete PLAYS THE PIANO with Ben Folds (Like I couldn’t swoon more!)

2 thoughts on “Pete for America”