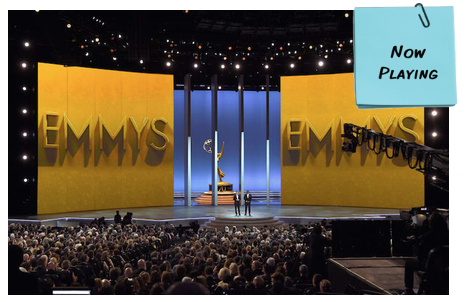 They should have done more Trump jokes.

So what if they would have alienated 36% (Note: And going lower) of the country?  They wouldn’t have bored the other 64%.

And whom did they think would be watching, anyway?

Saturday Night Live producer Lorne Michaels and his Weekend Update co-hosts Colin Jost and Michael Che play it so safe as producer and co-hosts of the 70th annual Emmys they send most of America to their collective freezers and prompt 798,000 lb. weight gain in three hours!

That would be the headline if I were writing it, if headlines were that long or if most people still even called them headlines anymore.

Oh we’re with you, Alec.

A simpler way to put it is Saturday Night Live wins the 2018 Emmy for best variety sketch show for its biting political satire in the age of #MeToo #TakeAKnee and #DonaldtheTerrible, yet steam cleans all of its best jokes and bits when let out of its demographic for a primetime audience.

That’s like seeing an Orange Elephant in your house every day for the last year but choosing to never mention it to your family, neighbors or roommates for fear of making the Elephant uncomfortable.

Or hedging your bets because you are afraid too many in that inner circle will hate for bringing Him up.

I mean, can’t we just have a couple of hours to ourselves away from that god damned ELEPHANT?!!

You knew we were in trouble when early on the broadcast managed to make Maya Rudolph unfunny.  Then there was the opening bit with….oh, why relive it. 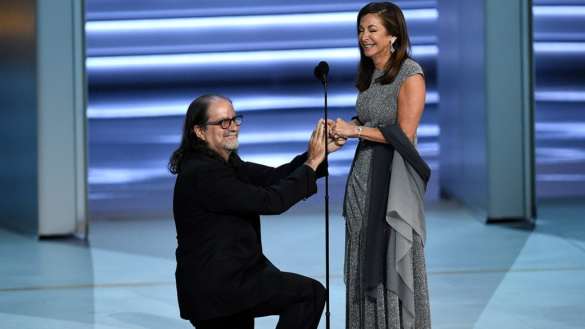 Can we talk about this now?!?!

Most watchers would agree the high point came in the acceptance speech for best director of a variety special.  That was when Oscar’s director Glenn Weiss shared his Mom had died two weeks ago and that she always loved his girlfriend.  And then preceded to tell his girlfriend that rather than answer why he never referred to her as his girlfriend when he introduced her to people he would instead show his love by marrying her

We were all with Leslie (plus that suit is #FIRE)

The audience screamed, the girlfriend smiled incredulously and was then ushered on the stage where Glenn pulled out the ring his Dad gave his Mom 67 years ago, got down on his knee and proposed.

Of course, she accepted.

I’m not made of stone!

But what if she said no, you ask?  What then?

Well, that would have been even BETTER TV because it took a risk that anything MAY happen when you’re being REAL and that in the long run it works out for the better.

You’d think SNL would know better since the word LIVE is in its title.

There were moments of consolation to be sure.  The comedy sweep of Amazon’s The Marvelous Mrs. Maisel in the series, actress, writing and directing categories.  The FIRST win for beloved Henry Winkler in 43 years  (and five previous nominations) for his work on HBO’s Barry.

It was also cool to see John Mulaney pick up a solo writing award for his special Kid Gorgeous since he is one of the best in the biz at what he does at the moment.  #AndtheLavenderTux

Not to mention, who could argue with spreading the best drama and best limited series awards over Netflix’s The Crown, FX’s just ended The Americans and HBO’s Game of Thrones?….

Did they even see season 2 of The Handmaid’s Tale???  Oh, take it as just another denial of what’s REALLY going on in Trump America.

Still, there was some encouragement to be had with RuPaul’s Drag Race winning best reality competition series and HBO’s Last Week Tonight with John Oliver taking best variety talk series.  Not to mention the recognition of the perversely riveting Assassination of Gianni Versace on FX being named best limited series.

Oh, and the 60 second bit lesbian comic Hannah Gadsby did when introducing…something….proved once again no one handles an audience or an uncomfortable moment better than the woman who will no doubt be an Emmy winner next year for her brilliant Netflix special Nanette.

Couldn’t have said it better myself.

It should not go unnoticed that not one winner, or even outstanding moment mentioned, came from a series on what used to be considered one of the BIG THREE/FOUR networks.

That is with the exception of the award for NBC’s Saturday Night Live.

This is what happens when you try to grab more viewers by reelin’ it in.

You don’t win Emmys.    Instead, you lose Emmy viewers.

“Say Something” – A Great Big World and Christina Aguilera