I hadn’t planned on binge watching Amazon’s The Last Tycoon.   But it’s set in 1930s Hollywood and stars Matt Bomer as the first young genius studio exec – a guy who is impossibly handsome, a virtuoso at story, Jewish and…wait for it…manages in his own Tinsletown way to fight the Nazis. One might say this was MADE for ME.

Besides, I desperately needed an escape from Trump and Mooch – two neighborhood bullies from Queens/Long Island, my home turf, whom I’ve fought all of my life to avoid, escape and, ultimately, defeat.

Yes, it’s a bit sobering to realize that despite years of positive experiences, therapy and a life you personally deem a success, that somewhere deep down many of us (Note: Okay, I) still carry around the anger and childhood scars of hurt that our tormenters managed to cavalierly foist on us decades before. Not to mention a deep-seated need to not only defeat them but pulverize their smug, mealy-mouthed faces of capped pearly whites far down below Middle Earth.

I’m with you Liz Lemon!

On the other hand, to recognize this is, to an extent, to be freed of it. You can’t fight people like Donald Trump and Anthony Scaramucci until you realize exactly who they are and what they represent to you. For me, it’s a uniquely New York brand of self-assured macho know-nothingness. A dictatorial, cavalier expression of selfish id that they think entitles them to rule the roost of the neighborhood –which in 2017 terms means the world.

When the Mooch, Electoral Potus’ new “communications director” (Note: If that meant orangutans were interpreters of logic for chimpanzees), this week publically spewed (via a reporter for The New Yorker, no less!) that soon to be ex-White House Chief of staff Reince Priebus was a “fucking paranoid schizophrenic” and that White Supremacist/Electoral Potus consigliore Steve Bannon was nothing like him because The Mooch wasn’t interested in “sucking my own cock” I wasn’t particularly taken aback. Instead, I was actually back in the old neighborhood. Because that’s EXACTLY how I remembered these cretins talking when I was a teenager.   The difference is at that time I imagined the most either of them would amount to was working behind the deli counter or selling real estate on Queens Blvd. as they chased the grown up versions of the gals with overly processed hair that I worked with at the neighborhood stationary store. I never thought, even in my wildest nightmare, that they could become the defacto leaders of what was once referred to as the Free World.

Is this real life???

Well, I couldn’t have imagined it. Even in my sickest, most secret fantasy, which, trust me, was quite a bit wilder then than any one is now.

(Note: Oh, and know that there’s nothing wrong with Queens Blvd. real estate sales or slicing pastrami for lunch customers at the local A & P if you at least do it with aplomb and some small measure of decency). 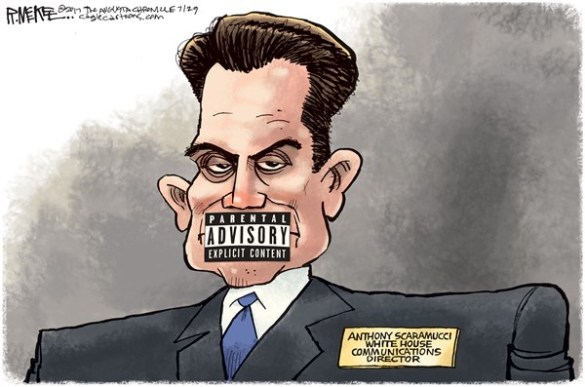 Ain’t nothing decent about this bro

It seems highly unlikely that when F. Scott Fitzgerald wrote his novel The Last Tycoon in the 1930s that he could have ever imagined two crude pinheaded asshats the likes of Scaramucci and Trump in an Oval Office that was for so long occupied by a leader with the brains, stature and heart of Franklin D. Roosevelt.

Still, even back then Fitzgerald – not to mention the expanded story in the Amazon series – understood the idea of reinvention and repackaging for the masses. In Fitzgerald’s world, a working class Jewish guy from the Bronx named Milton is enveloped by the biz of show and emerges as a handsome Wasp named Monroe with all the money, gals and glamour you could shake a camera at.

I mean.. does the man have a bad angle? #askingforafriend

This falls in line with so many of us in the entertainment industry still, people who came from anywhere-but-here to pursue our dreams and mold ourselves into something more than what we were led to believe by the neighborhood bullies that we would ever be.

However what is sobering beyond belief at the moment is that very nitwits we sought to show up have somehow pulled the rug out from under us via their cynical use of media and money in order to run the show as the worst rotting version of their true selves.

OK.. I’m not that far gone, I promise #closethough

Scaramucci came from Wall Street and was a hedge fund manager with reportedly all the baggage and questionable morality those words imply. Trump was the scion of a New York real estate mogul who made money discriminating against minorities and followed his father’s lead making tens of millions by openly refusing to pay vendors for services rendered, declaring no less than five bankruptcies and propping up his flagging empire through an indecipherable (and to date unknowable) web of loans from questionable foreign banks and billionaire oligarchal sources.

Pay no attention to the man behind the curtain

This would be enough for another unfinished Fitzgerald-like novel without both of their current third acts. For instead of reinventing themselves in a slicker, more tailored package for the masses, both of these goombas have doubled down on the coarse sociopathic aspects of their torturous personalities.

Trump, in particular, saw an opening among the disenfranchised – both working class and suburban class; religious, traditional-minded and yes, in some cases racist – and packaged himself a super villain torturer of anyone or anything that has ever done them wrong in the past or dares to in the future.   The sexism, the cynicism, the racism, the rejection of facts and education for emotion and id marshaled on behalf of the FORGOTTEN.

It’s like having your own PERSONAL BULLY. And who better than an actual bully – the real unleashed Trump of each and every decade gone by, including his adolescence, to play the role? It’s like when they cast Dr. Haing S. Gnor, himself a Cambodian refugee, to play a fictional Cambodian refugee in the 1984 movie The Killing Fields. He was so believable and so riveting that to this day he is still the only Asian American actor to have ever won an Oscar as best supporting actor.

Trump, of course, has graduated to lead actor but sadly this is real life and at this point it seems crystal clear he is not pretending. This is who he is, was and will be and what we see unfolding is what he has wrought.

Which is why this week I preferred just for a few hours to live in a world where a Jewish kid from the boroughs could actually grow up to be smarter and more successful than any American bully imaginable, ruling a make-believe world of the most beautiful dreams imaginable – a place where the good triumphed and the bad guys were captured and then forced to pay the piper instead of preaching from the bully pulpit.

And doing all this — I look exactly like Matt Bomer. 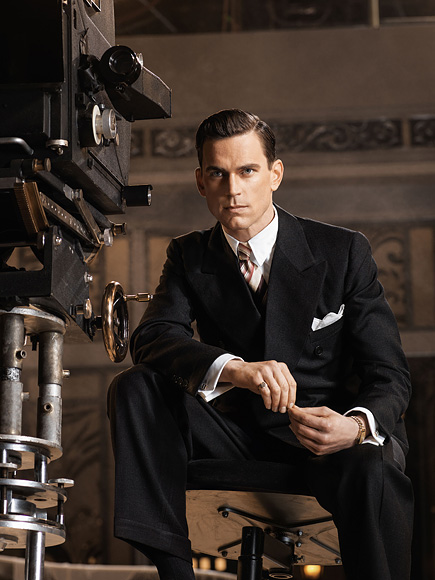 Too many pics of Bomer? Not possible

Of course, that is precisely why we need dreams – to aspire to something more – and yes, higher – than what we currently are – as we work towards making that ideal a reality.

2 thoughts on “The Real Tycoons”