As a very little boy I remember watching black and white Superman reruns on syndicated TV where each week a booming male voice announced over the credits that a muscly hunk in tights would fight for truth, justice and the American way.

Like many little boys I became obsessed with Superman, tied a towel around my neck and ran around the house imagining I could fly out the window and…

Well, I’m not quite sure what I wanted to do. Certainly, it wasn’t to fight – for justice or anything else. It was more about the journey, the outfit and the power of a muscly hunk via the deep male voice.

Feel free to fill in the rest of the blanks about me from there if you haven’t already – or if indeed there are any. But don’t for a moment imagine for one millisecond the vast array of the rest of us are much different than the slightly fey mini-me.

Don’t hate me ’cause you ain’t me!

In the last year America has clearly chosen fantasy, muscular masculinity over truth. Time will tell whether in the end we will indeed choose justice or instead continue running around our homes in imagined worlds where we truly believe items like towels and TV dialogue will guide us to a better world.

A pop culture shift in the last week signals a scintilla of hope. Wonder Woman has emerged as THE #1 movie blockbuster of 2017- marking not only the first breakout FEMALE MOVIE superhero but the first time a female director (Patty Jenkins) is at the helm of a major studio tentpole film achieving blockbuster status.

At more than $200 million domestically and $350 million worldwide (in less than two weeks), Ms. Jenkins and her movie have broken a long-standing glass ceiling. 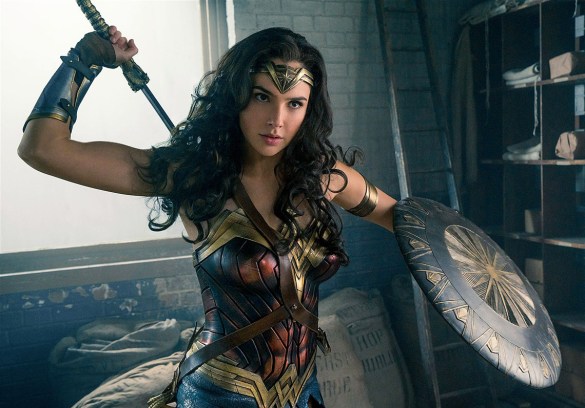 Six months ago Hillary Clinton’s campaign rented New York’s Javits Center hoping to literally demolish its glass ceiling in victory but instead found itself unimaginably conceding the following day to an inexperienced male who sold the trappings of masculinity in order to prove he could make America great again.

The electoral college public went for the salesmanship and words rather than deep-seated personal beliefs about us all being part of one fabric of world humanity that is united by doing all the good you can, for all the people you can, for as long as you can.

That message, and Stronger Together, were the key mantras of the Clinton campaign and are offshoots of the Methodist faith she was raised in. For the record, the real quote is:

“Do all the good you can, for all the people you can, in all the ways you can, as long as ever you can.’”

One could easily read the Methodist faith and the Clinton mantra into the psyche of Diana/Wonder Woman through not only the way she was raised by the other Amazonian women but by her guiding principles in every decision she makes and each action she takes.

When she finds herself enmeshed behind WWI’s western front and sees the years long death and suffering of the innocent villagers all around her she is appalled and can only simply and boldly ask Why isn’t anyone doing anything?

Her cohorts argue quite forcefully that they need to ignore the carnage and keep going for the greater good of the big victory and to leave these people as simple casualties of war.   But that doesn’t fit her core principles so instead she climbs out of her foxhole, weaponizes her superpowers and smashes through enemy lines where, eventually, even her doubters aid her in vanquishing the enemy and saving this small, but in her eyes, more than worthy swath of townspeople.

In an even more climactic third act moment later on, when the notion is raised that mass humanity might not deserve to be saved, she has an even simpler retort:

It’s not about deserve, it’s about what you believe! And I believe in love.

Now see, taken out of context this might seem….well, conclude what you will, once again. No one ever accused comic books or movie superheroes of speaking Edward Albee-esque dialogue. Yet within the context of what we’re watching, it has all the best resonance of the Hillary campaign’s aspirational message and of Methodism.

If this doesn’t sound Trumpian – well, it isn’t. It’s exactly the opposite

America’s unique place in the world has always been as an experimental, imperfect democracy. There is a reason why for centuries we’ve been lauded as a nation of immigrants where everything seems possible even if – in reality – it’s not.

In the actual world, one can’t achieve everything. But what is also true is that one will achieve nothing unless they believe what they’re trying to achieve is possible.

JUST KIDDING! REACH FOR THE STARS!

To have no overriding principle other than the betterment of one’s self or one’s immediate family to the detriment of all others is a recipe for perhaps temporary success but ultimate abject failure.

This is exactly the opposite message of Wonder Woman’s more compassionate one and that is why it is currently cleaning up at the global box-office and leaving all the naysaying, mummified macho men in the dust. 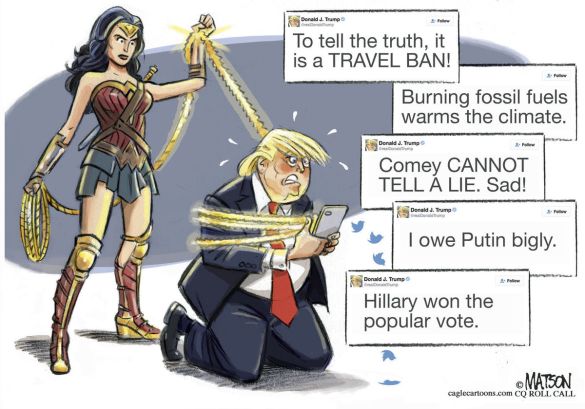 It is the 360-degree counter to Make America Great Again – which is fast being recognized as nothing more than a bloated, synthetic phantom cudgel through which to reject multiculturalism, the global community and social change.

No superpower EVER emerges victorious unless they’re fighting for the greater good.

Florence + The Machine – “Kiss with a Fist”

One thought on “Truth! Justice! and the American Way?”