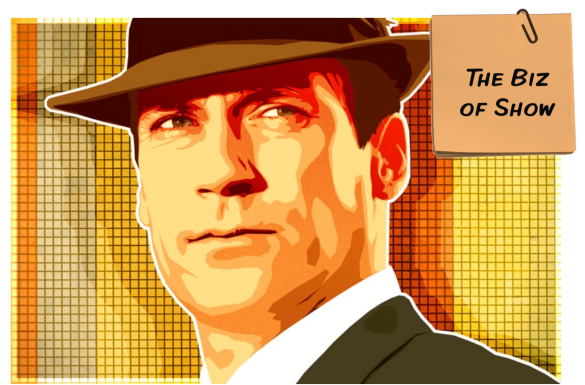 I used to have a poster in my bathroom that read ART OFFICIAL underneath a cartoon drawing of a deceased politician who, among other achievements over his 30 years in office, vigorously advocated for legislation in the U.S. Senate that would quarantine people with AIDS, reinstitute segregation in the South and defund all governmental support of the arts. His name was Jesse Helms and a looker, he wasn’t.  Still, every time I went to the bathroom and saw his face, snarling at me from over the bathtub, I felt as if I were taking a crap right in front of him and everything he stood for. This made me incessantly happy for quite a long period of time during a very difficult period of my life.  Okay, about 15 years.  Still, how many other $9.95 posters can you say that for? 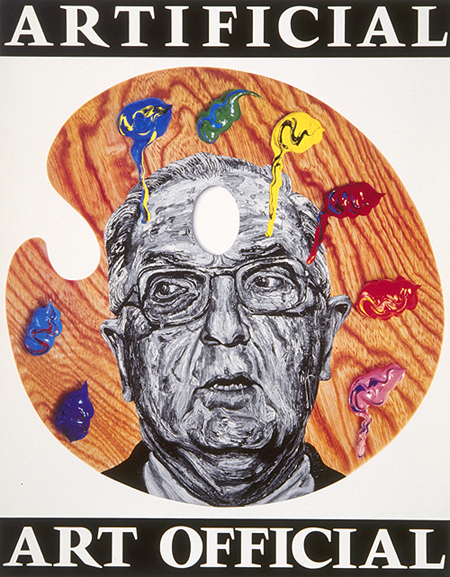 Allow me to excuse myself

Many people, including my now husband, criticized me for keeping Mr. Helms around for that long and begged me to take him down.  Nevertheless, I wouldn’t relent – even when Mr. Helms started to bend and fade after years of restroom abuse and we were towards the end of the Clinton administration where times had begun to change just a little bit.

Some months after Sen. Helms finally dropped dead at the age of 87 and my test of wills was won I decided it was time to move on.  Still, I sometimes miss that poster (Note:  The original piece was drawn by famed guerilla poster artist Robbie Conal) and everything it evoked – anger, color, sadness, triumph and, in the end, just plain justice.

Point being, it’s hard to quantify what a poster or any piece of art means to an individual.  What speaks to us, why it resonates, just how good “good” really is or just how “awful” a truly awful creation can be is purely subjective.  Can you really, as the old saying goes, sew a silk purse from a sow’s ear?  Well, for my $9.95 you couldn’t get any more piggish than Jess Helms yet, crossed with the expert purse-spinning of someone like Mr. Conal, you could not have wound up with anything more silken.  My dear husband to this day still disagrees but, fortunately, arguments like those are not relationship breakers.

Which brings us to the announcement of this year’s Emmy Awards.

But before we begin, here’s a photo of Jon Hamm. 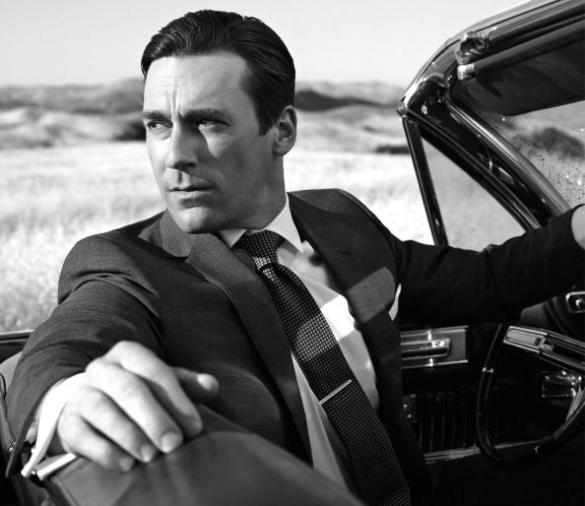 This man has NEVER won an Emmy Award and yet has been nominated all eight seasons he has brilliantly played Don Draper on the equally brilliant television series Mad Men, which finally ended its run this year.

Yes, Mr. Hamm is the physical anti-Helms and in that sense certainly bears no relation to any sow I have ever seen.  But that is no reason to penalize him for achieving the equivalent of the finest silk etching of one of the medium’s most iconic and certainly-to-be enduring characters.  So if you’re a voter – you. must. vote. for.  him.  And if you’re not, consider joining the Television Academy just so you can make sure that this time justice will be done.  Or simply go through your phone book and lobby someone you love, like or even feel indifferent towards to do the same.

Even I will vote for Jon!

Now, where were we?

Ah yes – awards.  See how totally subjective these types of discussions can be?

For your conveniences, here is a link to this year’s nominees

There is no point going on about every one of several hundred categories and who was left out, included or otherwise justly ignored.  We all have our favorites.  And sows.  Yet here are some salient facts you might not have known:

Sizing up the competition

1. Every nominee in every category must be officially “entered” into the race.  To do this it costs anywhere from $200-$800, which can be reimbursed if you are a member of the Television Academy – though that’s a yearly fee equivalent to the entry fee.  True, the studios or producers will often pay the money but not always.  Not to mention, any time anyone pays for anything that will give the general public pleasure, the cost will somehow funnel its way back to you – the audience – in some form.

Translation: This is not to say that there are not deserving people who win this or any other show business award.  But the next time you become outraged at the unfairness of it all, consider the paradigm on which this is all constructed. (Note: With the exception of any award for Jon Hamm).

2. The rules require most categories limit the amount of nominees from 2-6.  But you might notice that this year some have seven or eight nominees.  That’s because there is a 2% rule which means that if the last nominee who makes the cut is not getting 2% votes more than the next one in line, that BOTH have to be upped above-the-line.  Got that?  I thought so.

Whatever… she is marrying Joe Manganiello #trophyhusband

Translation:  From the point of view of the television business – the more the merrier.  Meaning, if there is any way a network can somehow eke out another nomination it can advertise by getting one or two of its employees (who are often Academy members) to vote for one of their shows or performers or craftspeople they will do it with the hopes that they can land within 2% of the next marginal entry and somehow tip the scales in their favor.  Note:  This is not purely cynicism, though certainly something has to explain why Julia Louis-Dreyfus has been nominated 19 of the past 25 years for playing two very similar characters and Tatiana Maslany of Orphan Black finally received her first in three years for a BBC series (Orphan Black) during which she convincingly plays 5-7 very distinctly different people. (Note:  Oh, hiss and boo your own selves – Copyright, Bette Midler – and save your outrage for world peace).

3.  There is similarly no accounting for why perennial nominees are suddenly left off of the list.  For instance, this year Big Bang Theory’s Jim Parsons, a four-time winner and six-time nominee in the Best Lead Actor in a Comedy category, was completed overlooked.  Bill Maher, who has been nominated 18 times for hosting and writing his own show for 20 years (and has never ever won) was passed over entirely this time out.  (Note: He’s probably relieved).  Homeland was back among the best drama series in its fourth season after being dropped from the list last year following two consecutive nominations and one win in that category for its first two seasons.  Similarly, Mad Men has been nominated for best drama series for every year it has been on the air but NOT ONE OF ITS REGULAR ACTORS HAS EVER WON.  EVER.  #itsanhonorjust2benominated? 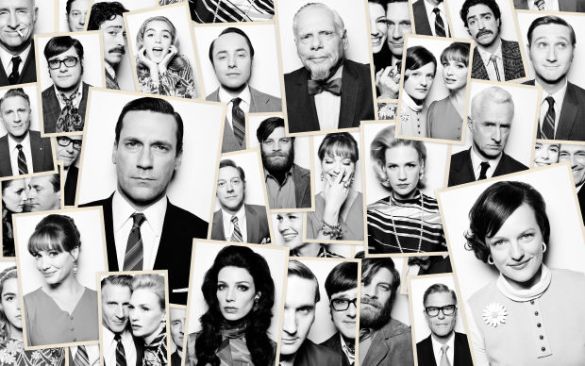 Will one of these admen (and women) finally bring home the gold?

4.  A big deal is made each year over “new blood” being recognized during awards season.  This year, the people of the moment the zeitgeist seems happiest about are Amy Schumer for her much lauded sketch comedy show on Comedy Central, John Oliver for hosting a new HBO show that bears his name and Netflix’s Unbreakable Kimmy Schmidt, which scored a series and a handful of guest-starring nominees but none for uh, Kimmy Schmidt – aka Ellie Kemper?  There are no whys in this discussion.  Only why nots.

Hey… look who was on Kimmy Schmidt?

5.  It’s one thing to peruse a mainstream publication’s list of Emmy contenders for hits and misses but when you’re looking for something a bit more specific, or at least unusual, research shows (Note: Okay, fine, it’s just my opinion), people turn to blogs.  In this spirit, we’d like to point out that by far THE unique Emmy nominee of 2015 is the nod to Jane the Virgin’s Anthony Mendez as BEST NARRATOR.  The CW show has broken the barrier and become the first ever-scripted series to score a nomination in this category.  Since you’re wondering, this year he goes up against Neil deGrasse Tyson, who narrated National Geographic’s “Hubble’s Cosmic Journey,” Miranda Richardson, who did Nat Geo Wild’s “Operation Orangutan,” Peter Coyote, the voice of PBS’ “The Roosevelts: An Intimate History” and Henry Strozier, narrator of Animal Planet’s “Too Cute!” series.  Though the much-hoped nomination for Jane the Virgin star Gina Rodriguez in the lead actress category didn’t happen. #donteventry

6.  Finally, it could be argued that, historically, among the most competitive Emmy category has been lead actress in a comedy series.  Think about it – Lucille Ball, Carol Burnett, Jean Stapleton, all four Golden Girls in various years and, okay, yes, Julia Louis-Dreyfus.  (Note:  I never said she wasn’t good!).

However, there should really only be one winner this year and that’s Lisa Kudrow for comic/tragic/comic heroine Valerie Cherish on HBO’s The Comeback.

It doesn’t get any better than what she managed to pull off as actress, writer and producer.  Will she win against Amy Schumer, Amy Poehler. Lily Tomlin, Edie Falco and, um. J L-Dreyfuss??  If there is any justice, yes.  But as was the case with my under $10 piece of Jesse Helms artwork, sometimes it takes 30 years for justice to prevail.

One thought on “For Your Consideration”