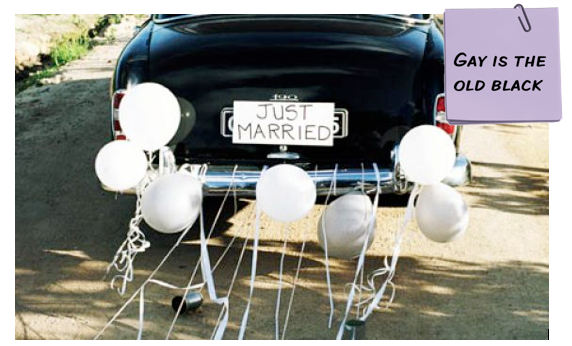 Guess what? The Chair got married! After 28 years of being a “partner,” the Chair now takes on the title of “husband.” Below, both the Chair and the Chair’s husband explain why after all this time they made it official. Each wrote their blog entry in separate rooms without ANY INPUT OR EDITING from the other.  Judge for yourself whether these two people belong together. (Duh, of course they do!)

Written by the Chair

Never in my wildest dreams did I ever think I’d get married. But like James Mason once told Judy Garland in A Star Is Born – and I’m paraphrasing here – the trouble with some dreams is that they’re not big enough.

Referencing a Judy Garland movie is not the only reason I got gay married after almost 28 years with the same guy.   Still, it certainly feels apt. Especially for someone like me who has truly always believed that among the benefits of being gay was the fact that you a. didn’t have to get married and b. weren’t required to join the military.

After much talk over the last few years about what the heck we were going to do about the marriage thing, as we called it, my guy and I decided to make it legal on May 5 in the upstairs room of our house, overlooking the cloudy L.A. skyline, in front of two witnesses listening to words said by a friend we work with who marries people in his spare time. It literally took less than five minutes. (almost as fast as the slideshow below)

We had planned various incarnations – some bigger and some much bigger – of this event. But it quickly became apparent to each of us that there was no way to keep it sort of smallish and the bigger it got the more anxious we both felt. Thanks to another good friend who years ago had a big wedding she and her husband paid for by themselves, we decided instead last year to blow our wedding money on a two-week trip to Italy and consider it our illegal honeymoon. All I can say about that is – cash REALLY well spent.

Yet here we are 12 months later, still dragging our feet on the legal front.

What pushed me over the edge was buying a house and the part where they ask you how you want your title – single, domestic partners, married, blah, blah, blah. That followed several prior medical experiences over the years where forms and people asked what is your relationship to your sick spouse and you find yourself realizing that legally, well, you have none. Not to mention the endless questions asked by others that boil down to phrases like: So, when? Or What are you waiting for?

Me to everyone for years

Truth be known I really do HATE the government or any part of the public sector involved in my life in any legal sense, but most especially when it comes to my love life. Is it because my parents were divorced – well, maybe? Could it be because as a gay person I realize how crazy the U.S. government can be when dealing with our issues and I didn’t want to give them the privilege of legislating our love in any way, good or bad, at all – absolutely?! Would another reason be that I found the whole thing tedious, tiresome, sort of corny and didn’t want to be bothered with it –MOST CERTAINLY AND DEFINITELY, ABSOLUTELY!

Please know this is not a put down to any married person out there, especially since I am now one of you. It was just never one of my dreams. Of course, neither was living outside of New York City or getting my driver’s license but somehow I learned to love navigating a convertible through the windy canyons and gridlocked roads of L.A.   Well as John Huston told Jack Nicholson in Chinatown, You may think you know what you’re dealing with but believe me you don’t… OR as Jack Nicholson told the world in A Few Good Men, You can’t handle the truth!

I think my sister, who served as one of our two witnesses, summed it up best when she told me point blank on my wedding day: You just hate doing anything where you think people are giving you permission. It makes you feel like somehow they’re telling you what to do and you hate being told what to do. In fact, you’ll do the opposite just to show them.

Wow, how did she get so smart?

Does it feel different? Slightly but not much. I mean, it’s awkward to suddenly call someone your husband. As if something has changed. Nothing has really changed in our relationship. And I had finally gotten used to the word partner.

But each person we tell – relatives, friends, acquaintances, business associates, even strangers we have just met where it comes up in conversation – are absolutely thrilled. Seriously, you should see the smiles on their faces. It’s as if to say – we love you, we support you, we don’t know you but want to support you because we think the fact that marriage equality is even a question is ridiculous and we want you and every friend you have who faces this same issue to know that. My god, the last time I saw this many people so happy about something I’ve said or done is, well….NEVER. Not even my bar-mitzvah came close because truly, what person at a mortgage company or doctor’s office would really care??? 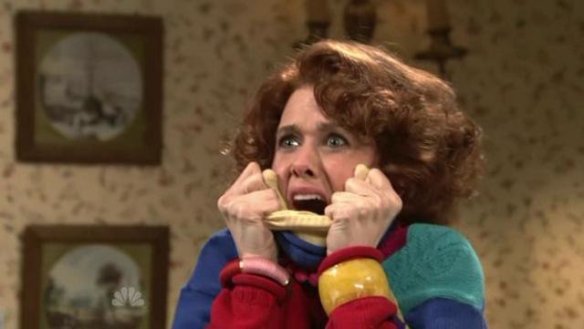 Everyone has suddenly become this Kristen Wiig character

Well, there is one last thing worth including but I guess I’m, as we’re all so often taught to do, saving the best for last. I got married because, well, I love my husband. Not to mention, I think anyone who has had the perseverance to spend almost 28 years with me deserves something official. Which is also why community property exists and why he can have a divorce any time he sees fit and take half, if not more, of everything I own.

Oh, don’t groan – he’s used to this from me. He loves me both for it and in spite of it. Though no, he didn’t marry me for it. And yes, that’s from Edward Albee’s Who’s Afraid of Virginia Woolf? which the playwright has always said is NOT about a gay couple but well, may as well be and certainly will be at some point generations after Mr. Albee dies – if for no other reason than the normality of marriage equality. Which I guess is, in itself, reason enough to get hitched.

Yes, there are other reasons. Many, in fact. But those are between me and my guy. I mean…husband. Wow. Make that, double wow.

WHY I (THINK) I GOT MARRIED

Written by The Chair’s Husband

Since the day back in August of 1978 when I realized I am gay (I think it was on a Saturday), I realized there were three things I would no longer have to worry about in my lifetime. While some gay men at the time thought of these as drawbacks to not being a member of the heterosexual majority, I always thought of them as advantages (let’s call them “perks”). My list of things “I don’t have to do” included:

#3 would take an act of divine intervention, which means it’s NEVER going to happen.

Ever since San Francisco starting issuing marriage licenses in 2004, we were each asked separately and together, “So when are you getting married?”

Neither of us ever had a “straight” answer to that question, because we weren’t entirely sure if we actually wanted and/or needed to get married.

Oh is that not polite?

It’s not that I’m anti-marriage (some of my best friends are married), but I always thought no matter where you happen to fall on the Kinsey Scale, getting married should be a choice, and, if you decide to get married, it should be for the right reason(s).

I realized immediately after the moment I said “I do,” I was overthinking this whole thing. It’s actually quite simple. We got married because we love each other.

I don’t need the State of California’s blessing. Or even a license from the City of Los Angeles (which took 30 minutes on a line to get to a window next to the window where you took care of unpaid parking tickets).

I think the fact I am married is really going to hit me the next time someone hands me a form to fill out and it asks me to check my marital status. Now I can check “married.” I am no longer a Conscientious Objector.