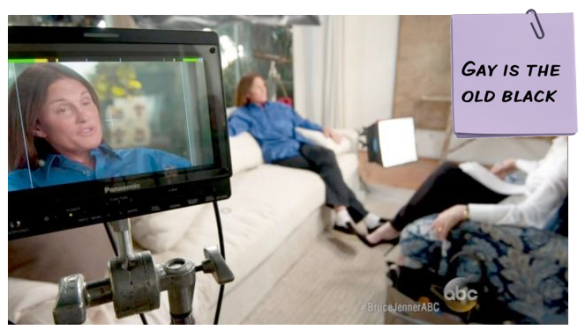 I spent several hours with Bruce Jenner in the eighties. It was on the patio of either his manager or publicist’s house in Beverly Hills and I was interviewing him about a new production company he was starting. Or well, maybe it was at his house. I can’t recall. And anyway, that’s not what was important.

What is important and what I do remember quite distinctly is that Bruce Jenner was in full tennis whites – shorts and a collared short sleeve shirt – and that he was beautiful. Not sexually beautiful necessarily – although perhaps he was – but physically attractive in a way that did not fit the binary we’ve established for gender identity.

Mr. Jenner had the floppy straight hair I had always coveted framing an oddly androgynous face that seemed not all male yet in no way female. He also (still) possessed the massive legs of an Olympic athlete. A decade before he had won a gold medal representing the US in the decathlon – a grueling 10 event sport that is routinely acknowledged to be one of the most physically demanding competitive events in all of sports. I remember thinking – this guy is big but just doesn’t seem strong enough to do that. Not to mention, there’s nothing hyper-masculine about him. Where was the physical verve, the testosterone, the veiny muscle definition of a guy guy? Oh well, maybe he just got tired of training. Also, he spoke in a gentle, caring manner that reminded me of a neighborhood librarian I once liked when I was a kid – not the person who only some years before was awarded the defacto title of jock of the world.

Yes, I really did want that hair (and still do, really)

I remember thinking at the time, oh well, I must be stereotyping. I guess one of the joys of being a reporter is that if you do your job right, you learn something new on every story.

Oh, and one last note before we change the subject — there was absolutely nothing SEXUAL about him. (And trust me, I was on the lookout for that at that time). Not a whit. Well, perhaps if I had been a woman. Which I most clearly wasn’t and, as it turns out, he most unclearly – was.

Hindsight may be 20/20 but none of these observations could have prepared me 30 years ago for what I heard several days ago on ABC’s 20/20 as I watched Mr. Jenner’s two hours of revelations about himself to Diane Sawyer. Proclaiming to the world that ‘I Am A Woman,’ he confirmed that, yes, he is transgender, yes, he wears women’s clothes at night and has sporadically donned dresses at various hours and in public for most of his life, and that most definitely yes, he is in the process of fully transitioning from male to the female he always felt he was inside. It was also announced simultaneously elsewhere that the E! Channel will in late July begin broadcasting an eight-part documentary series focusing on Mr. Jenner’s journey as a transgender woman which he very much hopes will be able to do some good in the world. 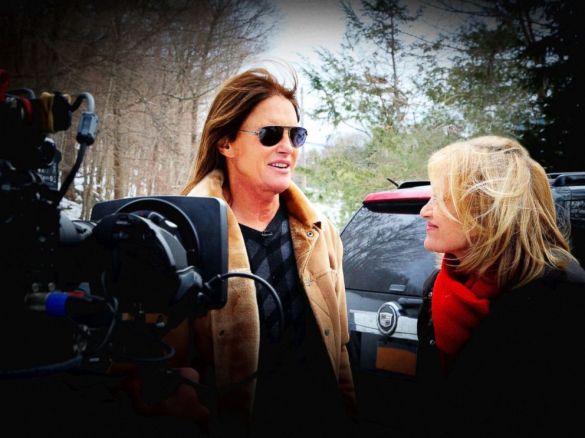 It is not at all lost on me that I never gave even a second thought over the years to any of my observations about Bruce Jenner after that one time I spent with him. Just as I am also positive that his recent announcements have in no way shaded, colored or in any way informed, influenced or twisted any of what I know I felt and/or experienced at the time in his presence all those years ago. I figured he never quite looked me in the eye and fidgeted a bit because he was more of a physical guy and not very articulate. The vagueness to his focus – well, perhaps he was being shoved into this interview and had other places he’d rather be. The fact that he didn’t seem terribly interested to engage in the usual give-and-take conversations I always seemed to get out of my interview subjects – hmm, it was probably just that I was too gay for an Olympic hero, or too east coast ethnic for this perfect specimen of mainstream Christian Americana, or even worse – just not worth the time for a guy they’d put on the cover of a Wheaties box.

As is often the case with such feelings – wrong, wrong and WRONG. My insecurities were ALL ABOUT ME. They had NOTHING to do with him – meaning, the other person. A good psychiatrist might call it projection. Even a mediocre one could figure it out and call it that.

But there is also something else going here. How we treat transgender people or those hiding in a closet or, in fact, ANYONE we think we know but don’t — or even that other someone we are meeting for the first time. 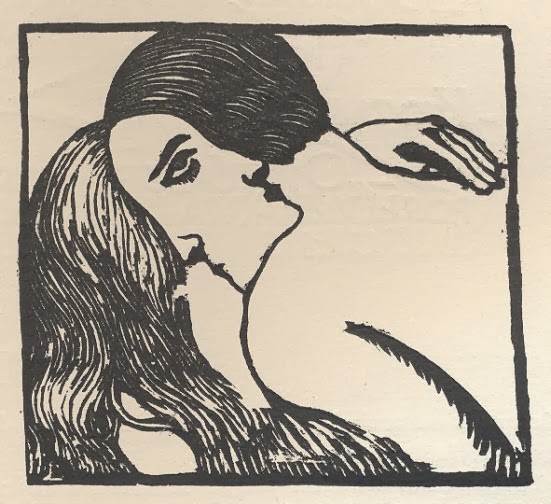 Sometimes you can’t see everything in just one glance

We often have absolutely NO CLUE what their really story is.   At least not after one meeting. Oh sure, anyone can defy the odds with a lucky guess, or even an educated one. But the ugly truth is – we never entirely know what’s going on in someone else’s mind or life – and certainly not entirely what’s inside another person – even when they are as close as the very dearest person to you.

In other words – as George Eliot so wisely first wrote in 1860 in her novel The Mill and the Floss:

Don’t judge a book by its cover.

(Note: Yes, George Eliot was really a she – her real name was Mary Ann Evans – and No, I did not know she first coined the phrase off the top of my head (see above note) – I had to look it up. 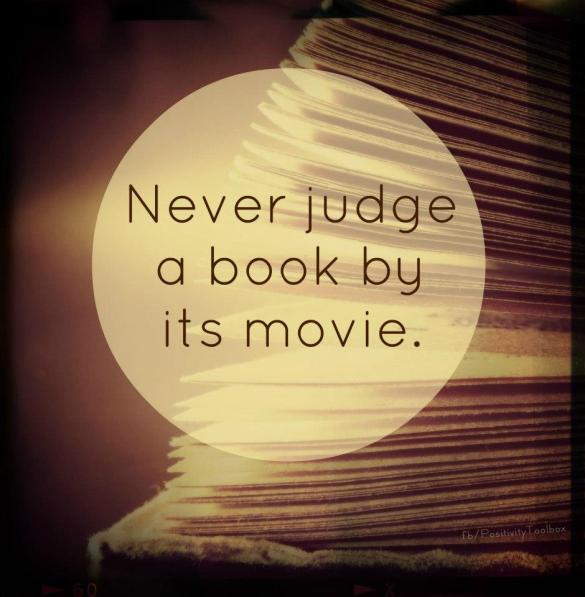 I have taught three transgender students in the last 18 months – that I am AWARE of. Not a shocking number but still not NOTHING and more than the total number I’ve taught in my entire 10+ year teaching career. (Note: That is, I think). You might assume their presence would be unsurprising to a guy like me but indeed it was not. What I can also report back is that each one of them – every single one –were the BEST writers in their group. This is not to generalize and say that Bruce Jenner would be a great writer if I had taught him but only to mention that clearly this is a community of people filled with talent who have something to say. Which is no different than any subset of people we all encounter everywhere.

Therefore, it might be appropriate as Mr. Jenner goes through his transition and we all become more educated and aware of this new subset of human beings who have nevertheless existed for quite a while under our collective radar, to be a little nicer and a lot more understanding. I’m all for zero censorship in art, but could it hurt Conan, Jimmy Fallon, David Letterman and a ton of other talk show hosts/comics to desist with the Jenner jokes for awhile?

Let’s take it down a notch, Ok?

That goes twelvefold for the tabloids, the paparazzi and the salacious infotainment shows. Yeah, I know he’s got his own docuseries on TV and is a public figure but really, it won’t kill anyone’s careers to lay off for a bit. And that goes for the rest of us at the office, through email or in the privacy of our own homes. There’s enough salaciousness to go around. How about following the Duggars to church and recording some of the public sermons they’re listening to – and then discuss, email or pass around social media? Or insert another Kim/Kanye reference somewhere, anywhere, and to anyone – Lord knows they won’t mind. At least, I don’t think they would. Though I guess I shouldn’t say for sure. 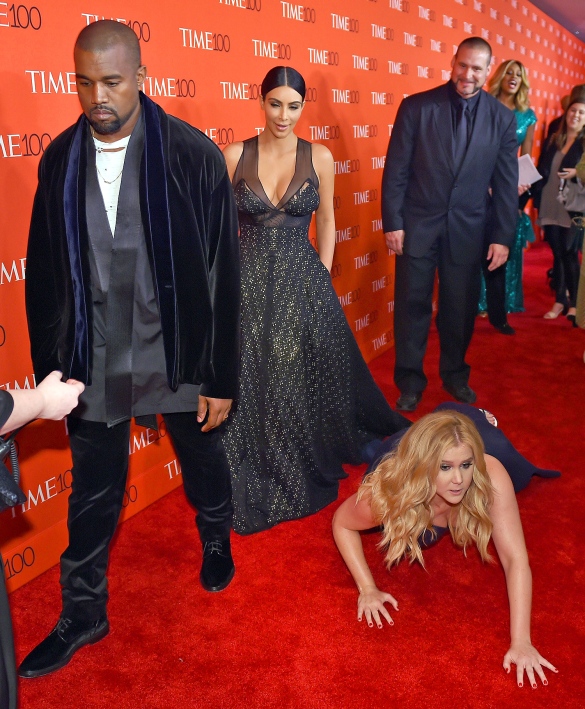 They didn’t even mind when Amy Schumer threw herself in front of them… literally. #goAmy

The amount of bravery it takes to go on national television and speak your non-mainsteam truth to an international audience is, well, immeasurable. I don’t know about you but I find it challenging to be consistently real every minute of the day without the cameras rolling. Heck, Ben Affleck just lobbied a PBS series on family genealogy to OMIT the fact that one of his distant relatives from centuries ago was a slave owner from an episode they had already filmed about the actor. Imagine what lengths any movie star goes to in order to hide the real truth about any potentially controversial area in their contemporary lives for fear of reprisal? I don’t have to imagine, I’ve seen it happen time and time again over the years from a sometimes front row seat in the entertainment industry. What Mr. Jenner has told the world pales by comparison in the salaciousness department. And by a lot.

So say the Queen!

As a gay person, one’s journey to come out is among life’s most significant events. That’s because try as we might to be like everyone else, we’re in the minority and will probably always be. In turn, that means there will always be a portion of the accepted majority who will always see us as different, other or just plain sick and inferior.

As times change and being gay is now cool among most of the younger generation and even some of their elders – and certainly far less controversial to the mainstream than the young version of me could ever have imagined when I interviewed Bruce Jenner all those years before – it’s time for another group to stand up and take the heat: the transgender community.   They have an unexpected new public face – a 65 year old man who has been married three times, fathered six kids, is grandfather to many more and has raised even more than that. He was also once the most famous male athlete in the world with a gold medal to prove it. And now he’s telling us that he’s going to become…a woman?

Yeah, he is. Deal with it. He’s earned the right by living in his own skin. We have a Black president who is the product of an inter-racial marriage, genocide is now going on in Syria, the Holocaust really did happen and the Tooth Fairy doesn’t exist.   Now which one of those is the most shocking anyway?