My father seldom scolded me as a child but I do remember there was one instance when he threw up his hands, thoroughly exasperated, when I constantly answered him back on a subject I felt strongly about.

Dad:  You always have to get the last word, don’t you?

Needless to say, this character flaw has continued into adulthood – as everyone who reads notesfromachair is aware of.

On the other hand, is it really a flaw?

There are many schools of thought on the art of having opinions and knowing when to voice them.  Admittedly, I have learned to zip it through the years if only to conserve the much-needed energy I know I’ll require in order to face the larger fight.  Yes, you find as time goes by that you can’t possibly engage every battle and, even if you could, your overall number of losses would inevitably increase even if the total stats in your win-loss column remains impressive to everyone else.  That alone can drive you crazy, as any fighter of any kind will tell you, myself included.

And when in doubt.. practice makes perfect!

Still, what I have not learned nor have any interest in acquiring knowledge of is the ability to remain silent when that little voice in your head tells you it is imperative that you speak.  This is not the same voice that demands that you curse someone out, punch them in the nose or insult their parents, spouse or child when something or someone annoys you.   It is the wiser, more measured voice that implores you to fight back because you know this is a battle that must be fought or a voice that even in small measure has to be heard in order to counterbalance the misinformed, moronic or simply wrong-headed views of another person, group or even nation.

Such circumstances came across my computer screen any number of times this week (as they often do) and I spoke out – loudly, softly, directly, calmly and angrily, depending on the situation.  See, what I’ve also learned is that you can modulate your tone depending on who your audience is and how effective you plan to be in persuading the opposition to your point of view in the argument.  Contrary to what I used to think, that’s not called compromise or selling out your passion or values – it’s simply referred to as– GOOD STRATEGY.  (Or is it “stategery” – GW Bush).

Let’s look at some my examples in a category I like to call:

As a gay person, each day presents numerous challenges in the art of energy conservation and reigning yourself in.  Of course, this is the case for any member of any minority groups fighting for its rights as well as for the friends who love and support them.  But with the recent US Supreme Court ruling in favor of marriage equality and the country’s now majority view that members of the same sex have the right to tie the knot, opposing factions have intensified their anger and attacks.  It’s akin to the barely coded and/or totally racist attacks against President Obama and African-Americans at large (Note: Any more comments on inner city laziness, Congressman Paul Ryan?) have had to endure since we elected the first Black man to lead the United States (or in this case – a man who is half-Black) in our more than two and half centuries of existence.  (Note #2: It might be worth recalling that during our first century African Americans couldn’t even vote and were considered “slave property” in many of these United States.  Those in the industry doubting this need merely to pop in their DVD of this year’s best picture Oscar winner, 12 Years A Slave).

Okay, no metaphor is perfect and perhaps I am overstating the comparison here.  I mean, we gays were never enslaved – only discriminated against, arrested, periodically beaten and just every so often killed by our oppressors.   But that in itself is a nice segue into the first of two public statements this past week that needed my answering.

#1: In a nationally-aired radio interview, Congresswoman Michelle Bachmann (D-MN) tried to defend the just vetoed Arizona bill (SB1062) that would have allowed any business to refuse service to any individuals said business choose not to serve on the basis of religious grounds. Said Rep. Bachman:

There’s nothing about gays in there (the law).  But the gay community decided to make this their measure.

The thing that I think is getting a little tiresome is the gay community – they’ve so bullied the American people and they’ve so intimidated politicians that politicians fear them – so that they think they get to dictate the agenda everywhere.

Now, you can think Rep. Bachmann makes a whole lot of sense or is a whole lotta crazy but the fact remains she is a five-term Congresswoman and has a key position as a member of the House Intelligence Committee (Note: Uh no, not joking) overseeing the CIA and the rest of the United States’ intelligence activities.  She also won the Iowa straw poll in 2012 in her bid to run for the US presidency as a nominee of the Republican Party and speaks for a significant group of religious conservative power brokers within it.  Therefore, any member of any outside group ignores her at their own peril.

What needed answering – as I did on web comments and am doing right here – is Rep. Bachmann’s classic fact distortion about the Arizona bill. Yes, the bill is worded in such a way that it does not specifically name gays and thus allows merchants to refuse service to any people they choose on religious grounds. (Note: As if that makes it any better).  But what she leaves out is the reason for the bill to begin with and the primary cases cited by numerous lobbying groups in support of it.  And that would be Elane Photography vs. Willock – a case in which a Christian wedding photographer was sued for refusing to serve a same sex wedding.  Similar cases involving bakers and florists who chose to refuse gays and lesbians as customers have also been cited. 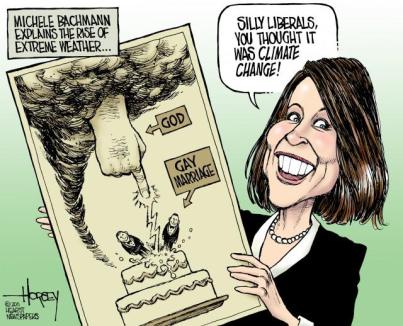 This is classic political manipulation akin to pending laws trying to limit early voting, decrease voting hours on Election Day and enforce stringent voter ID laws in states where no overwhelming voter fraud exists or time cutbacks are needed (e.g. Florida, Wisconsin, Florida).  But what is certainly well-known in these states is that the African American and other poor or minority community members – people who overwhelmingly vote for Democrats –  vote early, have limited time on Election Day and frequently don’t have driver’s licenses to easily identify themselves.

Now, as Aretha Franklin once sang, Who’s Zoomin’ Who?

#2:  Here is a story very prominently quoted nationally this week and displayed on a website sponsored by Norman Lear’s watchdog group, People for the American Way:

In an appearance at CPAC today, Oliver North denounced President Obama for treating military service members like “laboratory rats in some radical social experiment” and “apologizing” for America. North insisted that the US “has nothing ever to apologize for, not once” in its entire history.

Later, North said that the GOP must remain firm in working to ban marriage equality and abortion rights just as abolitionists fought to end slavery, warning that “if we as conservatives cease to be a place where people of faith and those who believe in strong moral values can come, we will cease to be a political force in America.”

For those under 30, Oliver North was a key member of Pres. Ronald Reagan’s National Security Council in the 1980s before resigning in the arms for hostages scandal of Iran-Contra and is now a best-selling NY Times author, popular conservative commentator and host of his own television show on the Fox News Channel, War Stories with Oliver North.

When my longtime companion posted the North piece on Facebook this week with an angry comment, one of his Facebook friends, who incidentally is a gay man, commented that “political discourse would probably be less apoplectic if the left didn’t spend so much time publicizing extremist statements by right-wing loonies and if the right didn’t spend so much time doing the same by left-loonies, neither of whom were in positions in power.”

Oh, I so beg and begged in print to this guy, to differ.

OK.. maybe not this aggresively

When fringe talk gets national attention and begins gaining national power it is the very definition of political discourse to engage with it – much like a military man like Col. North would do and is doing.  It is imperative.  It is a requirement.  Yes, it’s tiring, but if you are so moved in opposition it is your obligation to answer back and not leave such exaggerated, misinformed statements unchecked.

Rather than dissect each of former Col. North’s arguments point by point, let’s limit it to his comparison of religious conservatives fighting against the right of gays to marry as something akin to the abolitionists who were trying to end slavery.  So the logic goes that allowing gays to marry will somehow enslave religious conservatives?  And those fighting in support of the religious conservative, anti-gay marriage views are akin to those people who wanted to abolish slavery and free the slaves?  How will gay marriage enslave religious people in the same way that African Americans were enslaved?  (Note: Doubters from any industry can rent or download 12 Years a Slave from Netflix and find the correct answer.  Which is:  They will not).

I think the jist is… see this movie!

See, this didn’t take much time at all.  And it only took me mere moments to answer this guy online with it.  Maybe it changed his mind, maybe it didn’t, or maybe it gave someone else who was on the fence something to think about.

Well, as they say, both Rome and marriage equality weren’t built in a day.  Nor is any cause that gets your goat, or any point the voice inside tells you is worth fighting for or against.  In any arena, playing field, social event or family gathering and on any subject – personal or otherwise – that you know needs your support.  I can’t believe I’m going to end with a sports metaphor but when in doubt think of what hockey great Wayne Gretsky once said: