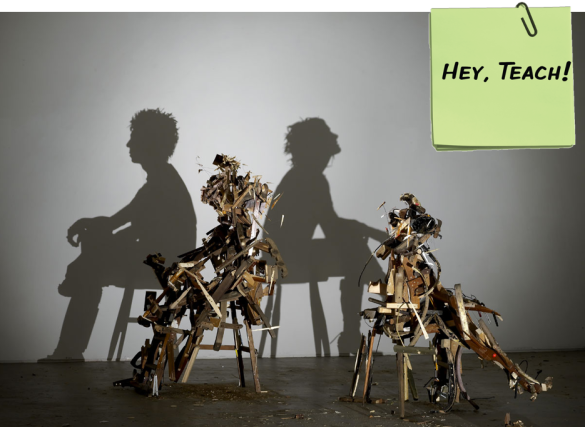 Art is a lie that reveals the truth

I googled the above quote when I came across it last week, un-credited and at the center of someone’s Twitter page, because those words sounded too profound for any person on social media in 2014 to have come up with on their own.  #sorrynotsorry.

Well, it turns out I was right and that tweet did not come from that twit.  Not only that but said twit did not gain me as a follower for failing to give Picasso credit.   That might sound harsh but I was even harder on myself for not knowing Picasso said this very famous phrase that I pretty much had never heard of until I came across it in my quest for more information on a political story.  I mean, how old am I and where do I get my news???

Of course, the truth is sort of overrated.  Long ago I realized not to press the person who was dumping me for the absolute unbridled facts of what went wrong (Note:  You don’t necessarily want lies, just a slightly softer version of their reality).  I also gave up on getting unvarnished feedback from everyone and their mother on everything that I write.  As any veteran writer will tell you, the latter will only lead to disaster.  Much better to seek the opinions of a few trusted friends who will give you a Picasso-esque version of a critique – which in the end is no less valid than the brutal beating you could receive from a studio executive, editor or nameless critic in your own field.   Plus, it’s usually worth a lot more.

It is not that any of us should advocate for lies or deception or existence in a dream world.  But sometimes what is true, beneath all the buzz and talk and data, is not what you are plain staring at.  Sometimes the absolute truth is an interpretation from someone with a better take than yourself – someone who has waded through all the options and the facts and the sides of something, and has come up with an alternative look at it that feels much more right than a thousand page document or photo album that simply presents the facts.

This is why we need artists (and art) and why I believe, as many before me have believed, that we all have an obligation to produce it in our own individual ways.

It is not a waste of time – nor a road to economic destruction any more than stubbornly sticking to your version of only what you see before you without input from anyone else.  Part of being a human – an advantage, actually – is the ability to process and reason information for yourself and those around you and to consistently put it out into the world as you live your everyday life. 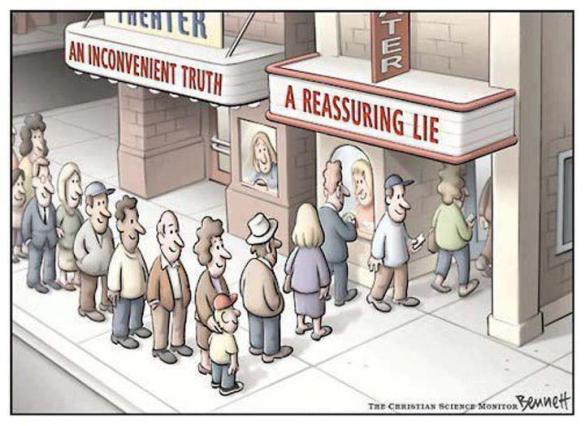 Sometimes this system can go awry.

We all do this with every decision we make, the work we do, the people we love, the friendships we make, and the conversations we have.  But we sometimes get hamstrung by what we perceive as the facts rather than to stand back and use simpler logic or artistic interpretation in order to shed light on the truth of an event or problem or simple everyday occurrence.

In my googling, I came across an article in Psychology Today that discussed Pablo Picasso’s dilemma more than a century ago in 1906 when he wanted to push the boundaries of what made a great portrait.  One of his early subjects was the renowned writer Gertrude Stein and after reworking his painting of her one too many times he was not happy (NOTE:  Uh, that’s right, Picasso was no different than the rest of us in that regard).

Anyway, eventually he came back to what he was painting and decided rather than to get as close as possible to the absolute objective truth of what we see when looking at Ms. Stein, he would give us his more extreme interpretation. This mask-like, more flattened portrait became very famous and an early signature of Picasso’s Cubist period.  It was also a favorite of Ms. Stein’s (the only reproduction of me which is always I, for me, she said) even as it was rejected in many other circles at the time as an indulgence that didn’t look enough like her.

When challenged about his Stein portrait, Picasso famously answered his critics this way:

Everybody says that she does not look like it but that does not make any difference, she will. 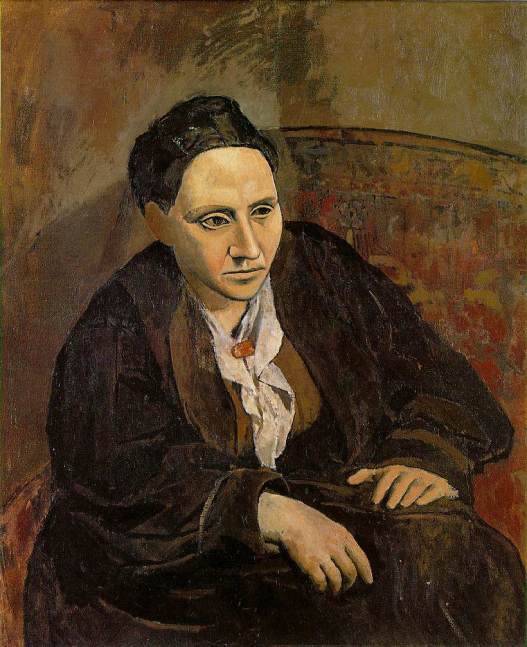 I suppose it’s up to us to decide whether Picasso’s tart retort refers to what Ms. Stein will indeed look like one day when she gets to be, say, my age – or whether the will he refers to is his own determination to so commit to the truth of what he sees when he paints that one day his image will overtake what the rest of us see when we look at, or even think of, Ms. Stein.  Or perhaps, it’s simply a little of both.

The great thing about art – whether you’re the maker or the audience – is that when it’s operating at its highest level it captures a version of the truth that can resonate the essence of what is real, what you see before you, better than what is actually right before your eyes.  It needn’t cover everything but must cover an essence of the artist’s chosen everything.

In a society of rational thought and laws and everyday reality, this is too often seen as a kind of flighty indulgence that doesn’t have any real meaning unless you’re talking about a Picasso (Note:  And even then…) But certainly that is no longer accurate by any stretch of even the most unimaginative when we rationally examine our present day lives.

Does anybody truly believe Reality TV is real?  Or that Fox News is fair and balanced?  (Note:  I’ll bet if you got Bill O’Reilly soused he’d even accede to my way of thinking).  And to be fair — I love reading the New York Times but its iconic motto of All The News That’s Fit To Print certainly begs the question of why some stories are fit and others are not and who decides which is which.  There are times when a particularly witty tweet from Andy Borowitz or a very astute Facebook post from one of the many friends I have who are smarter than myself, has given me a truer assessment of a contemporary issue than anything I read on the subject in the paper of record or any conclusion a so-called expert committee comes to after examining the so-called hard data.

Pete Seeger, the famed folksinger-songwriter, died this week at the age of 94 in the home he built himself in upstate New York.  I was fortunate enough to see Mr. Seeger play at a small anti-Vietnam War demonstration at Flushing Meadow Park in Queens when I was in high school, and I thought he was old then. (Note: This was after his censored appearance on CBS’s The Smothers Brothers Comedy Hour singing Waist Deep in the Big Muddy – a metaphorical song he wrote about Pres. Johnson’s escalation of the Vietnam War). I also wondered why someone so well known would take the time to be at this somewhat tiny demonstration when people like Jane Fonda were making international headlines with their own Vietnam War protests.  My logical thinking, forged by the American educational rewards system of bigger is better, at least audience wise, was that if he were really famous and important he wouldn’t be spending his time singing to me and a bunch of others in, of all places, Flushing – the uninspiring town where I lived. 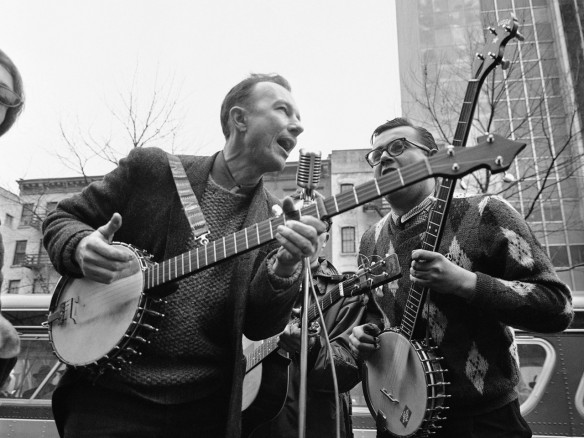 Faulty as this reasoning was, no doubt some people (many?) still think this way.  Consider we are still paying the most attention to:  who sells the most records, tapes CDs downloads (whatever!), who makes the most news; and who is voted the best of anything in our worlds.

Yet the very essence of Mr. Seeger was his ability to travel to all kinds of places much more obscure than Flushing and use his words to express the plight of the people.  And, quite simply, he never stopped doing it.  You might not have heard of him but you have certainly heard of several iconic songs he wrote and/or made famous, such as If I Had A Hammer, and We Shall Overcome.  The truth of those songs came from decades of seeking out the truth in hundreds of small towns and talking to thousands of working class individuals through which or whom he could employ his art to tell their truths.  Or at least THE truth in the way that he saw it.

One could argue lines like “If I Had A Hammer’s…It’s the hammer of justice, It’s the bell of freedom, It’s the song about Love between my brothers and my sisters, All over this land…” have spoken an equal or perhaps much more effective political truth than a library full of factual reports on the economic analysis of inequality.   Or that they rank far superior to the many multi-million dollar opinions from some of the most respected think tanks in the world on why, during many of the decades in which Mr. Seeger lived, we needed or didn’t need to go to war.

By the way, this is not pie-in-the-sky hippie talk.  Consider what usually stops and starts wars (Vietnam – Iraq – WWII).  It is general public outcry or too many deaths among the masses of survivors willing to risk everything that finally wins the day (Note: usually it’s a lot of both) after too many years or decades or even centuries of fighting.

Artistic expression is an indispensible fuel to this change.  Just as it can also be used selfishly to whine, piss people off and/or generally just entertain.  Like this little ditty starring Nathan Lane and the cast of Jersey Boys directed towards Fox News’ Sean Hannity after he floated the idea of leaving his home state of New York in order to relocate to more right-leaning states like Texas or Florida.

Okay so maybe this video – or your essay, painting or photograph or play or movie – is a little whiney.  And you’re absolutely positive it will never bring peace on the battlefield, end global warming or even make you a dime. (Note:  I’ll bet Mr. Lane would have done that for free if union rules had allowed him).  You still must try to do whatever you can to contribute to your own version of truth telling.  And that is because even the very best of any of the above in their fields don’t do this alone.  They are merely one element contributing to an overall collective truth at any given moment in time – one in which, like it or not – we are all some kind of part of.

4 thoughts on “This Art is My Art”