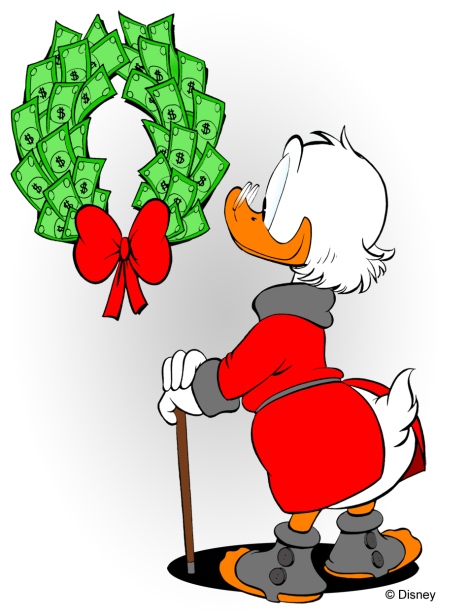 Notice I did NOT say MERRY CHRISTMAS or BELATED HAPPY CHANUKAH.  This is because I’m done being religiously correct.  You heard me – RELIGIOUSLY CORRECT.  Bah humbug.  I am so done.  No, actually…I am just beginning.

I just read this to my partner of 26 years and he said – Here we go – did you get to the part about Jesus being Black yet?

No, not yet.  Wait…you mean Jesus was as Black as….Santa Claus?

So much ground to cover here.  And we’ll get to Phil Robertson – that hate-spouting Fool from Duck Dynasty, who happens to also be religious, in a moment.  I promise.  But first, a story.

Many years ago in the 1970s I was minding my own business on the campus of Queens College.  I was 18 years old and a junior (yeah, I was smart for my age, so what – does that mean anyone listens to me any more than they do you?  Uh, no).  In any event, there I was minding my own beeswax when these Jewish guys dressed in full garb – you know the way that I mean – beards, long coats, big black hates – I meant hats! –  and ringlets of hair flowing down past their ears called payot (look it up) – urgently approached me and asked in very relentless and very accented loud whispers:  Are you Jewish?  Are you Jewish?

I could have been Mr. November

Sensing something was wrong – I mean, duh, my last name is Ginsberg, I’m 5’7” tall, wear glasses and read books, did you think I wasn’t a Yid – I reflexively answered yes.  I mean, what if someone was in danger?  The entire fate of my tribe could hang in the balance.

Boy, was that the wrong response.

Suddenly, these guys shoved me into this large van decorated with religious symbols and Hebrew scripture, shut the door and backed me into a seat.  All around me – and I mean everywhere – walls, ceiling and on TV screens – where images of Jews being tortured or persecuted.  Jewish fundamentalist music played.  Prayer books were put in my hands.  More religious guys paced around and began shooting questions at me about Jewish history.  Another guy offered me a yarmulke and prayer shawl and still another urged me to roll up my sleeves and put on these leather straps called tefillen and said he would pray with me (or was it us, perhaps there were a few others, I can’t recall) – for Us.

Never a shrinking violet and always with a strong survival streak given some earlier childhood traumas that involved bullies on the playground and various screwed up family dynamics, I pushed the guy out of the way, said something like, Uh, no and ran out of the van.  Well, at least I attempted to.  Because being just your average Jew I couldn’t figure out how to open the latch on the van door.  Little did I know that decades later I’d become quite familiar with these things and learn those vans are really trailers which the film industry would rename Honey wagons and they would be the spot where I’d spend endless hours with other regular Jews (as well as people of other religions and even atheists) who star in and make Hollywood movies about still other people whose actions my ultra religious captors would  certainly disapprove of.  Yes, they often do disapprove – even now – along with all the other fundamentalist nutbags from all of the other religions all over the world –and that includes the United States – of anyone who does not fit into their own tightly constructed beliefs.

But back to this story:

Somehow I did get out of that van (did I break the latch?  I was never sure) and survived, perhaps in order to tell this tale to you more than 35 years later.  The lesson?  Well, there are many.  But the primary one is this:  Never get into a van – or really anything – with a religious fundamentalist.   No good will come of it.  It is a sure recipe for disaster and the only way you’ll win is to escape with your life.

Another reason to never get in an unfamiliar van

Years later I learned that this van I was shoved into was called a Mitzvah Mobile and was started by the ultra orthodox Jewish sect called the Chabad Lubavitch Hassidism to persuade (nee intimidate) American Jews to adhere to the more stringent religious beliefs that group espoused.  The good news: this didn’t work on me.  (In fact, it produced the opposite result).  The bad news: there are now Mitzvah Mobiles all over the world.

How this vehicle got onto the Queens College campus of the 1970s, I will never know.  (Note:  Well, our film society did have a midnight showing of the X-rated classic Devil in Miss Jones on campus, so there was that).  But what I do know is that those Mitzvah Mobile fellas are no different from Duck Dynasty figurehead Phil Robertson.  Who is no different from Pat Robertson or the late Jerry Falwell.  Who are all only several steps away from the Taliban.  Who is a mere one step away from the Westboro Baptist Church.  Who are only several steps away from the Muslim fundamentalists who hijacked the planes that crashed into the World Trade Center. Who bear some resemblance to the Ayatolloah Khomeini.  Who is not that far removed  Reverend Louis Farrakhan or the present radical Chabbad sect in Brooklyn.  It’s all the same snake pit.  Which in no way, shape or form resembles the Garden of Eden.

One might argue this is not the correct statement to make Christmas week, or during the time of Kwanza, or even a month after Chanukah.  However, I would say this is precisely the moment for us all to reflect on this:

Any single religious person who tries to persuade you that their way is the high way using any means they deem fair and moral based on their own individual religious dogma is no different than the most radically violent one.

It all leads to the same place.  Eventually.  The Crusades.  The Third Reich.  Osama Bin Laden’s Jihad.  No, this is not an overstatement.  It simply is – fact.

Now, don’t get all fire and brimstone or your tribal equivalent on me.  This by no means disqualifies anyone of faith from speaking his or her mind.  However, it does disqualify them from public insults, intimidations, racist rants and other forms of emotional and or physical discrimination without outcry and consequences.  That is the price for living in a free and civil society.   And it’s a very small one.   Hiding behind a “God” of your own choosing does not exempt you from the rules of a still secular society.

Which brings us to the charming Phil Robertson, head of the family on A & E’s most highly rated reality show (14 million viewers and counting backwards) – Duck Dynasty.  Here are some of the lovely statements Mr. Robertson made in GQ magazine last week that has gotten him into hot water and, in turn, suspended from his show.

Sorry buddy, but you don’t exactly blend in

Or on his experiences working alongside Black people picking cotton in the pre-Civil rights era.

I never with my eyes, saw the mistreatment of any black person…They’re singing and happy.  I never heard one of them, one black person, say, “I tell you what:  These doggone white people” – not a word!  Pre-entitlement, pre-welfare, you say: Were they happy?  They were godly; they were happy; no one was singing the blues.

Or this excerpt from a sermon in a Pennsylvania church in 2002:

Makes you want to have him over for meal, doesn’t it?  Well, that is as long as he doesn’t turn around and try to place your evil head on a platter and announce dinner is served. 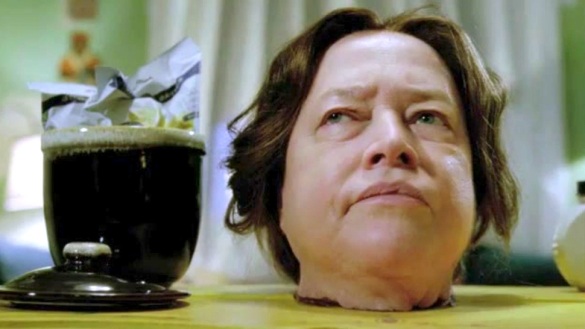 Oh, of course Phil has every right to say whatever he wants.  That’s what free speech is about.  But the first amendment allows freedom of speech, religion, assembly and the press.  It does not guarantee others can’t object to what you are saying or that there cannot be consequences to your actions.  Meaning just as we don’t require a fundamentalist church to marry a gay couple if it chooses not to, a religious fundamentalist whose

To every action there is always an equal, opposite reaction.

What is scarier than the news articles on the Duck Dynasty Debacle are the thousands of virulent comments from other fundamentalist supporters who somehow have adopted a dogma so stringent that it leaves no room for anyone that does not adhere to their own rigid, born again rule book.  We Jews don’t really have a hell so their comments that non-believers will burn don’t really rankle me.  But the threats of violence to us sinners (Note: I’m in double trouble being gay AND a non-Christian), not to mention the virulence with which they are written, is a tough road to hoe.

Fringe, you say?  Well, perhaps right now.  But I don’t think so.  The 14 million viewers of DD, a one-hour A & E basic cable show, are nothing to sneeze at.  That’s far more than the number of people who read the NY Times or any other newspaper on any given day.  Though nowhere near as many (41 million) who tune in to view just one hour of Fox News on any average month.

Of course, there were other stories of intolerance last week.  For example:

Yes it’s true – this week gay marriage was a hot button thorn in the side of the religiously superior.  But make no mistake about it, next week it could and probably will be a woman’s right to choose.  Just as in some Middle Eastern countries it will simply be about the right for a young woman to be educated.  While in still others it can all boil down to being born with the right color skin or in the more advantageous economic class.

Of course, here in Hollywood it’s merely a battle to look young and stay relevant in a business that is as unforgiving of those sins as the Duck Dynasty family is of alternate lifestyles.  Perhaps even more so.  But I’m not going to get into that.

Hmm, but apparently, Scott isn’t taking phone calls these days..  And he also doesn’t answer emails from journalists.  Nor does he speak live in person to anyone asking questions unless presumably they’re, well – members of his own tribe.  Which might not only be optimal but usual.  How are we (I?) to know the truth when we can’t ask?

I’ve been thinking all day about what I would say if I actually did get a chance to talk to him.  Like all writers, my thoughts were many – in fact all over the place.  But like all the mentors before me have taught me I edited and boiled them down to just three words.  These are the words I’d use to describe him and all others who choose to be profiteers on the backs of hate spewing religious zealots hiding behind their own version of God – as well as a way to categorize the zealots themselves.  And all of the zealots the came before them or will follow after.  And those words are:  QUACK, QUACK, QUACK.

And did I mention – happy holidays?