Within the last week my computer was stolen and within the last year my federal tax return refund was issued to someone else who illegally filed a claim in my name.  Now don’t panic.  I have another computer and about 65% of the stuff from the missing one is either backed up or in hard copy.  I also filed a new claim with the IRS stating that some jerk stole my social security number for tax purposes only – apparently a common occurrence these days – and have been assured by my accountant that within the next year or so I should get my full refund in the mail.

Of course, none of this takes away how absolutely creepy it feels to know that someone other than your dog has their paws on, inside and around private parts of you and your life.  It’s kind of like a blind date you didn’t ask for who stays over without permission and, aside from your wallet, steals some of your most personal items from your house, including, most importantly, your personal space.

All of this got me thinking about the two-hour season premiere on Sunday night of the best written series on television – Mad Men – a show that at its core is about how the social and political revolution of the sixties forever changed (some say stole) the identities of American men and women but also allowed us to evolve into who we are today.  Not that I’m recommending it but theft and the turmoil it brings can be good too – waking us up to who and what we really are beyond who and what we possess.  (As if all that isn’t temporary anyway).

In approaching the herculean task of a season set in the often overwritten year of 1968, series creator Matt Weiner shows us a world of individuals who up until now were determined to be defined by what they have rather than who they are because the latter is just too scary and impossible to think about or really even know for sure.  This presents the ultimate problem for his characters because, truthfully, almost none of them have even so much as a passing clue as to their inner selves.  In fact, I’d venture to say that even if a magic Genie appeared to them offering to grant any three wishes of their greatest desire, they would be flummoxed to choose what the top three real wishes would be.  This perpetual conflict and uncertainty is why Mad Men continues to work year after year.  It is a show that series creator Weiner has acknowledged publicly has “no concept at all other than its characters.”

But in real life, as opposed to television drama (which in the case of MM, is much funnier, subtler, more dramatic and better executed), we all do have an identity, which is why no one can truly steal it if deep down you know who you are. That is the reason why I don’t get personally freaked out by the thefts mentioned earlier and why I don’t give a hoot about my Facebook privacy settings or how many items I buy online using a credit card that someone can possibly take and use as their own. Oh sure, these robber barons can make my life temporarily miserable and cause some financial strain or personal heartache, but can they truly take who I am and make it them???  I don’t think so.  Not unless they want to walk xxx number of years (not sayin’ the number, sorry kids) in my shoes and have each identical experiences of joy, heartache and everything in between that I have learned, or sometimes not learned, from.  (Note on the latter: I am nothing if not a work in progress.  Or, if you like metaphor, a chair still under construction but not completely built).

Still, it is also why the entirety of my, or most anyone else’s, true life would not make a good television series or movie.  We don’t live in constant conflict and wit that serve a three or five (or more) act structure and don’t have the best writers, directors and actors to perform it.  We only have ourselves.  Which brings us back to MM, American society and the year 1968. 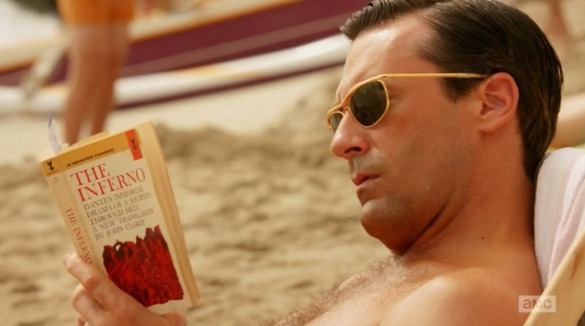 It is not surprising that in its next to last season Mad Men is finally tackling the issue of personal (and on a large scale, American?) identity because its iconic leading Man, Don Draper (Jon Hamm… did I mention Jon Hamm?), is someone whose own identity was literally stolen from a dead soldier and molded (by the real character, along with his writers and the actor playing him) into the alpha male of his time by stealing other traits from the best and brightest of what he saw around him in his travels from his rural American childhood, to the snazzy streets of Madison Avenue, to posh suburban New York, and then up to the polished penthouses of Manhattan.  Now in its final years, Mad Men has lost none of its own polish and luster because more and more the faux Madison-Avenue-American-dream-world from the late 50s it created is beginning to crumble before our eyes.  Rather like the way the economic bubble of the 2000s (aughts?) brought down the financial avarice of the 1980s’ “greed is good” culture and the failed American foreign power grabs of the 1980s, 90s and aughts has provoked a bit of an isolationist break from war on the part of the vast majority of the American public today.

As Mr. Weiner and company spend the next number of months against the backdrop of the assassinations of Martin Luther King and Bobby Kennedy, the campus shootings at Kent State, the riots at the Democratic convention in Chicago, the body bags of the Vietnam War, flower power, marijuana, bell bottoms, good and bad hairstyles (depending on your POV and the kind of hair you have) and rock ‘n roll, all topped off by the election of Richard M. Nixon to president (do I have to live through it a second time?!!), it is important to remember that every bit of these moments and many more are all part of what brought us all to where we are today.  It is why China, France, Germany or Japan will never actually be the United States, just as the United States can never aspire to be any one of those countries.  That’s not a quality judgment on us or them but merely a statement of fact.

You can steal an idea of something but, as Mad Men consistently shows us, ideas are intangible until they are embodied and fully fleshed and executed out by the actions of people and the reactions of others to what they do.  If you have any doubts that this show does it well – consider all of the many films and TV shows that attempt over and over to wallow in the backdrop of the late sixties for dramatic effect and how over and over again those television series and movies fail miserably, or at least in great part, in almost every way.   It is never about the backdrop or the surface or the literal of what we see.  It is always about what’s below the surface and how what is and isn’t there is played out by the people inhabiting that world.  To wit (very limited spoilers ahead):

I tell my students all the time to not worry about anyone stealing their ideas. Original ideas can never really be stolen because it is always about how they’re executed – how they play out from scene to scene and in total.

The only thing you have to fear… is wasting post-its

This is much the same as our lives and how we really live them rather than how it might seem to the world.   That is also the way it is with our favorite television series, particularly ones like Mad Men, which was never about the window dressing of the often portrayed 1960s but the ways in which the people who identified as Americans got through it… and came out the other side.