Life is a continuous process of give and take.  Take and give.  A process in which you make mistakes, lots of them, in addition to the many things that you get right.  In fact, one of the ways you can measure if you’re living a life really worth living – meaning doing it well  – is by the amount of mistakes you make.  Chances are if the total number that month or year is zero, you are doing the very thing you have been trying so hard not to do – failing.  Perhaps I’ve been teaching college students too long and that’s the reason I think in terms of pass/fail.  But I don’t think so.

Human beings are not computer programs whose excellence can be programmed.  We are a species who do the lion’s share of our learning the good old fashioned way – through practice and trial and error.   I don’t know about you but when I practice anything – my writing, my cooking, my teaching or my making non-neurotic choices even though the neurotic, crazy choice is far more appealing – I screw up.  I find the more I practice the less I screw up, which if anything is a reason for us all to incessantly practice at anything we care about.   We don’t usually because we are either tired or know that if things are going so well we don’t want to rock the boat since it’s only a matter of time before we – that’s right, you guessed it – screw up. 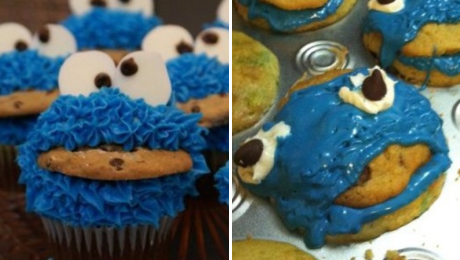 Sometimes things just don’t come out exactly as you had hoped….

A lot of times we plateau in what we do well and in an effort not to make a mistake we don’t force ourselves to do enough new stuff.   This, too, is a mistake because nothing stays the same ever – even if you stop and decide it’s going to.  At some point something will change in the equation so why not be the one to take the initiative and shake it up a bit to keep things interesting or perhaps even improve?  It’s because we have this idea that if we hold on to the same tried and true method of doing some task or interest or job the result will always be the same.  Hmmm, it might for a while – as long as we can do it – which won’t be forever.  But it will also ensure we get a bit lazy, or complacent or fail (there’s that word again) to open a door we might have enjoyed going down or benefited from immensely just because we didn’t want to…. Well, you know. 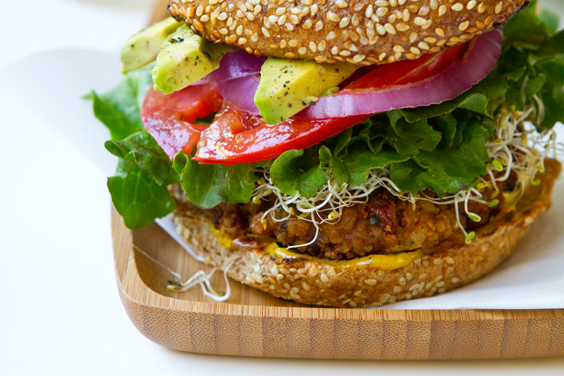 Though, I’m not sure I will ever crave a Vegan Burger

I find this complacency/fear in me sometimes when I teach the same classes, do my gym routine (when I go), or cook the same six meals for dinner several times a month (the rest of the time I eat out or order in).  For example, let’s take teaching – where I keep requiring students to watch the same five movies every semester to illustrate various screenwriting principles.  In the latter, it’s not that these examples don’t work – in fact they do work quite well.  Juno, Adaptation, Harold and Maude, Chinatown, North by Northwest – they’re all excellent films that young people can learn a lot from and, more importantly, I never get tired of teaching or talking about with them.   It’s that, well – I am already quite certain how well how well they work.  Perhaps there is something that could work even better (and make me better)?  Of course, there is.  There is always something that can work better.  But you have to search for it.  That’s why I also have students every other week go out to a newly released movie (at a movie theatre) that we can analyze – so as new screenwriters they can be exposed to all types of films – even if it’s in a genre they or I don’t like.

This week for instance, I insisted on Identity Thief – not because I was dying to see it but because I knew it had a quintessential Hollywood formula you could summarize in a one sheet (industry parlance for, uh, poster) and it is important to see at least one of those a semester if one plans to work in the real world movie business and know how either a. you make one of those or b. what you’re up against.

Definitely the sucker for paying full price admission to this…

So what if it’s #1 at the box-office and as god-awful a movie as you can almost imagine  (well, certainly according to Salon).  And who cares if I will never get back those two hours and my artsy colleagues condemn me for it.  (Note: I actually enjoy the fact of the latter.  Remind me sometime to tell you the full story of how my very positive review of 9 to 5 in the eighties caused one of my fellow Variety film critics to fling his reporter’s notebooks halfway across the newsroom in unmitigated rage).  But at least in the case of Identity Thief it was an attempt on my part (if not the filmmakers’) to do something different.

Okay — I will admit that given the sheer nonsensically incoherent script choices made in Identity Thief I might have made the wrong choice here.  Okay, let me be more blunt – I might have (might have?!) screwed up.  This choice didn’t work at all as a film so perhaps it might have been better to have students watch a much more blatantly commercial film of that type that I knew did work brilliantly (e.g. Forty Year Old Virgin).  There’s only one problem — this is not the 2005 Virgin world of Hollywood.  It’s a different 2013 world a student needs to make their identity in.  So part of their education should be in knowing what to do and not to do.  To which this film illustrates the ultimate challenge.  Universally panned by the critics, probably the future winner of any number of Razzies and yet….it is the #1 film at the box-office this weekend with $36,500,000 taken in domestically in 3 days.  Screw up/Failure or Cleverness/Success?  Ponder that for a while and then consider your final answer to the question, rather than the film itself (which I don’t want anyone to run out and see), as your teachable moment.

Or listen to the philosophy of Homer

Mistakes came up a bunch of times at a recent WGA panel of Oscar and guild nominated screenwriters I took my students to attend.  It always does when writers talk among themselves – as well as other similar themes such as failing, honesty, creativity and discipline.  I suspect this is the case when you gather a group of any creative types – actors, directors, designers or visual artists.  Or maybe even plumbers or insurance salesman or accountants.  Who is to say that there are not these fears (or creativity) among them?  The medical plan that should never have been recommended; the copper pipe system that was not needed or too good to be true; the balance sheet that someone concocted to save their own asses instead of their clients.  Obviously – there is a theme here.

But I can’t speak to those nor would you probably want to read about them since we all know that for some reason, show business is EVERYONE’S second, if not first business.  What I can speak to is a few moments at the panel this week:

So inspired was I by these words that I went home and looked it up to find out more.  But instead what I found was that Roman, or perhaps his father, was mistaken and these words were apparently the advice of not Dumas but another esteemed, centuries old novelist – Honore de Balzac.

But who really cares (except maybe Balzac and he’s dead)?  Because despite the mistake of whomever – Francis or Roman or perhaps me in telling the story – the message was no less truthful or worthy.  This is important to remember not only in the subject of writing but also in an attempt to say or do anything meaningful.  Mistakes will be made but it’s what is really being said that counts – whether it’s from a director’s chair on a stage in Beverly Hills, in your house or apartment in a private conversation, or, most importantly, even only in your own mind – to yourself.