Gun control?  Adolescent depression?  Human impulse to violence?  Bad people doing bad things to good people?  All or some of the above?

This is what I imagine:  A room at a school, similar to the one I went to decades ago because, let’s face it, east coast classrooms for mostly middle class white kids are not all that different.

But this one is.  Because when you open the door — you know, the one that has a rectangular glass cutout at the top of it where you can see in — there is something unusual.  First you react to the fact that bodies are lying on the floor.  But not just bodies – coarsely severed limbs on top of bodies.  Then you realize there’s blood.  A lot of it.  Everywhere.  And in between is carnage.  The carnage of human remains – part of a brain, an elbow, maybe a knee or a piece of foot.  It’s not like war, though, because these are smaller than the usual body parts of war.  Well, not all wars, I suppose.  Though I have never been on a battlefield, I imagine scattered among the young adult males, and nowadays even females, we might also find on some the remains of youngsters no older than those in that Connecticut schoolhouse on Friday morning.

Sorry to get so graphic but there seems no other way to talk about it other than to report on what is real or what we know to be real through our informed imagination and by the fact that no one wants to say exactly what they’ve seen inside that classroom except to call it words like “gruesome,” unspeakable” and “a massacre.” 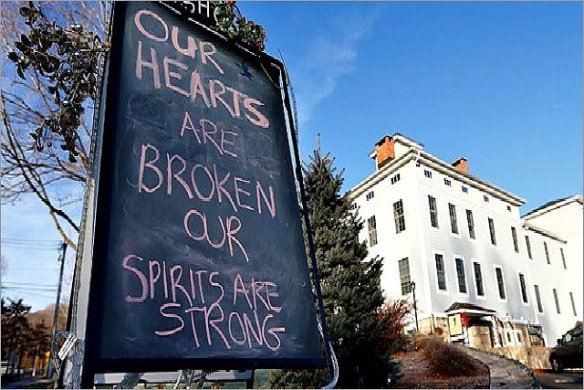 What we have physically seen with our own eyes are cops, medical workers, politicians and yes, even Presidents, seeming overwhelmed, speechless or, inarticulate actually, as they tried to put the tragedy into words and express how they or we were feeling.  And you know that I’m not exaggerating on that score when seasoned tragedy professionals find it all too much too bear and dare to allow themselves to become inexpressive or, perish the thought, overly emotional, or even merely just plain emotional.  At all.

Not everyone went there.  Some among them had logical explanations for the unexplainable.  Politicians like ex-Arkansas governor/former presidential candidate Mike Huckabee noted publicly that it was unsurprising that school shootings like this continue to take place because as a society we have banished religion from the classroom.  This is what happens to you “by removing God from our schools,” Mr. H., an ordained minister, warned in his best imitation of Pat Robertson or Jerry Falwell or….(fill in your favorite fundamentalist religious icon of choice).  Or – perhaps he was just being himself.

Click here to watch full video.. if you can.

“Comedy equals tragedy plus time.”  Alan Alda once spoke these lines in the poignantly funny and tragic Woody Allen film masterpiece “Crimes and Misdemeanors.”  Someone should pass this on to Mr. Huckabee because his full remarks would only make sense as the nonsensical punch line of a televangelist in a not yet written Woody Allen film.  But voiced the very day of the massacre in the last month of 2012 they come off as just plain shallow, stupid and simplistic.  Not to mention dangerously misinformed.  Still, one wonders if the reverse is true – if tragedy is nothing more than comedy plus time.  Meaning, if we have long enough to think about something we once thought was funny, can we conclude that in our older years we’ll find that same laugh riot just plain sad?  Using this logic and Mr. Huckabee’s words maybe this is what drove the now dead 20-year-old Connecticut assassin to do what he did.  Maybe gales of laughter heard while not in the presence of God surrounded him enough that one day the laughter turned into anger, which then turned into this.  Uh, I don’t think so.  That sounds as likely and simplistic and as appropriate a thought as Mr. Huckabee’s explanation.  So sorry for stooping so slow.

But back to carnage and the mass murder of 27 people, mostly children between the ages of 5 and 10.  Murder, that is, by at least one automatic weapon and two pistols held by the hand of someone who was not yet old enough to legally drink in the United States.  Of course we all know that many young men and women under 21 do drink.  Just as we know many people under 21 are taught to shoot firearms.  However, the latter is legal.  Even when they’re not in the military.  (Note: the minimum age for military service is 18.  Just thought I’d bring that salient fact up).

Sorry if I’m getting too snide, graphic or just plain gross.  But when the big macho male Connecticut Medical Examiner gets on television and says of the massacre, “I’ve been doing this work a third of a century and this is the worst that I’ve seen and probably that any of my colleagues have ever seen” you know the time for niceties are gone.

By the way – salient fun facts:

There is a tipping point for everything – a boiling over moment when a critical mass is reached and something that has been building for a long time can’t help but inevitably explode into existence.  (Okay, it’s not always an explosion but it is worth noting that these things do often start gradually and mount with time). We’re told this is how change occurs and, looking back in history, we can trace the inevitability.  But we can never quite predict what that tipping point will actually be.  And often not without hindsight, long after it happens.

I’ve told a number of people that I was just slightly older than the dead children at Sandy Hook Elementary School when both Martin Luther King and Bobby Kennedy were shot within a few months of each other in 1968.  At the time, it felt like a tipping point on gun violence in America had been reached.  But it hadn’t.

It happened again many more times over many more decades – most recently after the mass shootings at Columbine, then again at Virginia Tech, and then this past year at the movie theatres in Colorado.  But, once again, it hadn’t.

Unlike war, there are not countries to be brought together to broker a treaty or an end to this reality.  There is simply the citizenry of the country in the form of the government.  And we all know how well that has been going.

And yet, there seems to be something about the deaths of young children that occasionally does make the difference.  We saw this in the Vietnam War with the My Lai massacre.  We also saw it with AIDS when young hemophiliacs like Ryan White were ostracized or infants in other countries began to be massively ravaged.

It’s sad to think that it took the deaths of these innocents for us to reach the tipping point this time.  But what’s sadder is to think their deaths won’t make the difference.

A friend wrote to me that there are 275 million guns in private hands in our nation of 315 million and that it will be incredibly difficult to put this genie back in the bottle.  This friend is incredibly smart and often quite perceptive.  But in this case, I hope he’s as wrong as Mike Huckabee.

6 thoughts on “A Real Conversation”