Load up the Klown Kars (yes, I know it’s spelled wrong). 2011 is coming to a close and clearly there is not room for every one of the klowns lurking about our public consciousness these days.  So with Klown kars being notoriously small in size, it seems like it’ll take more than a fleet to haul away all of the klowns in the news and on television and the lack of them in the movies right now.  Therefore, we must get ready since it’s very hard to haul away a lack.

You know you must be living in an alternative big top universe when the powers that be at NBC have confirmed they’re negotiating with Ryan Seacrest to take the place of Matt Lauer as the lead host on NBC’s morning news juggernaut – Today.   Can you see him interviewing Ahmadinejad?  Call 1-888- FALSE IDOL 08 to get your own question asked during the interview competition. 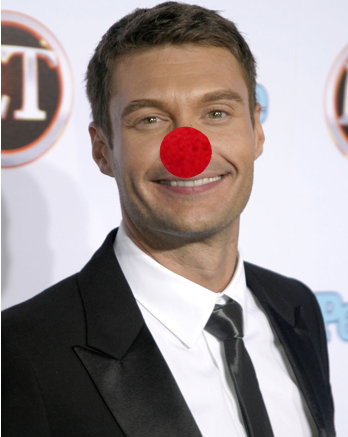 The joke's on us, America.

Or when Donald Trump resurfaces like the Sea Monster that he is from 20,000 leagues below the line of taste so he can insert himself once again into presidential politics – this time as a debate host and a potential faux competitor (so he says) if he deems the candidate field unacceptable at some future date.  Then there’s the 9-year-old boy who had the temerity to explain to tongue tied presidential candidate Michelle Bachmann at one of her campaign events that his lesbian Mom was normal and “doesn’t need fixing.”  (Note: he’s not a klown, merely explaining reason to an unsuspecting one).  Plus the release of the most depressing crop of Christmas films I’ve come across in a long time, suffering from a sheer lack of klownishness.  The one ray of sunshine: the trailer to    “Joyful Noise,” starring Dolly Parton and Queen Latifah as competing rival choir directors – a movie that is much glossier, entertaining and smarter than anyone now running for president because, well, at least it knows what it is, doesn’t try to be anything more than that and thus is willing to take the risk of letting the chips fall where they may.  But of course, that’s not coming out until Jan. 2012 – perhaps inaugurating the year when all of this klownishness will take a much needed break in action and go on permanent or at least semi permanent hiatus.  Or perhaps, get its own circus.  Heaven (or hell) forbid.

Even if we weren’t enduring the worst economic crisis since…uh…the last one…who could blame us for being a bit depressed? Similarly, who could blame any young person, particularly the ones in their early twenties, for either taking to the streets to protest a gamed financial system or checking out of everything all together when they surf the Internet, Facebook (it gets its own category), et al and see posts of both Rick Perry and Pat Robertson blaming the gays for God’s shunning of and a lack of Christianity in America (because you can’t have both).  Or advice from Newt Grinch-rich, the now front-running Republican presidential candidate (try laughing at that) to young people who come from poor families to work as high school janitors in order to save up money for their education instead of raising taxes a mere few percentage points on the , I mean, job creators of America.

I happen to teach many of these kids of the emerging generation and I can tell you that, on the whole, they are every bit as smart, motivated and confused as any of us ever were.  But they are a bit more scared.  Scared of how they will make their livings.  Scared of the obviousness of global warming and why the world seems to not be getting that it’s not just a blip on the ecological radar when there are devastating tsunamis earthquakes and nuclear meltdowns at the same time it’s 80 degrees in New York City in November.  And rightfully so.  Because one of the scariest sights I remember from my younger days was of a circus when a klown popped up out of nowhere.  These days they’re popping up everywhere. In behavior.  In words.  And, worst of all, in actions.  Smiling all the way to a lucrative book deal; or lecture tour; or, perhaps, elected office.

It’s one thing to have klowns on a public stage for merely entertainment purposes.  Meaning, I suppose it’s fine for Donald Trump to be the PT Barnum host of a reality show like “The Apprentice.”  While it and he are certainly not my first choice for ringmaster, if I close my eyes or squint so I don’t have to look at the wispy wheat that is tortured backwards across his head to pass as split ended follicles of human something, I vaguely get the appeal.

But perhaps Joan Rivers put it more succinctly when she once famously (and tastefully) said of the powers that be who book guests on the “Tonight Show” – “they’d put Hitler on if he had 10 good minutes.” It certainly rings even more true in the circus we call TODAY.

But let’s not get political.  Let’s talk klowns.  Does anyone really want to watch Donald Trump as ringmaster of a public political debate with Newt Gingrich, sorry – Grinch-rich – in the role of Bozo?  (Especially when, if it were a movie, “Moneyball”’s Brad Pitt could be the star?)  Or watch Rick Perry Bozo commercials that accuse Pres. Obama of waging a war on “people of faith” because he is supporting gays serving in the military?  Or see the president act like Shakes the Klown and only seemingly come to real life when re-election is at stake and his public economic back is against the wall?  Uh – about as much as you probably want to watch Ryan Seacrest play Matt Lauer over coffee each morning as you head out the door to face a world in which you will be forced to deal with more real-life Bozos than an archivist at the Barnum & Bailey network. (Q: there isn’t one, yet, is there? A:  No, but perhaps it’s not a bad idea.  We have lots and lots of content now – both past, present and, as it looks in this foreseeable moment, the very foreseeable future).

It used to be you could go to the movies to escape – or at least for an uplifting message.  Having just watched a screener of “The Descendents” yesterday I can tell you George Clooney can act but isn’t much fun this Christmas.  Nor is the thought of spending the holidays with Margaret Thatcher by way of Meryl Streep particularly joyful (or even entertainingly klownish).  You could go see some movies about Hollywood like the tribute to Marilyn Monroe that is “My Week With Marilyn,” or the silent black and white homage to a classy golden era of Hollywood called “The Artist” but I fear that it will only ultimately remind you of how unglamorous and, well, klownish, contemporary life in the 2010’s really are.

I would like something to tell the kids (those humans in their 20s) this holiday season that will support the bromide that working hard and being persistent will cause favorable results in one’s favor.  (“Clarabelle the Klown goes to Washington?” Brad Pitt starring in a remake of “A Thousand Klowns” as a down on his luck father who manages to entertain his kids or, better yet, get them actual jobs?  How about we just give him the Oscar he deserves for “Moneyball” and for being our best sample of public genetic perfection who also manages to actually spend time in New Orleans building houses for the poor?).

Build me up, buttercup.

Of course  – showing it in a movie or lauding a celebrity for a vaguely real (reel?) life is certainly no guarantee of the hope or change we were looking for once upon a time. But when all the ringmasters of the world are offering us are new, old and recycled KLOWN acts it’s very hard not to take matters into your own hands.  And to not feel like the deck is stacked against a good outcome.  An outcome where more than our noses will continue to wind up in the red if we don’t clear the stage.  And make room on the road for the KARS that will KART the KLOWNS away.