This will be an intermittent mid-week feature follow-up to the previous blog post addressing issues that compel the chair to be thrown – both figuratively and literally. 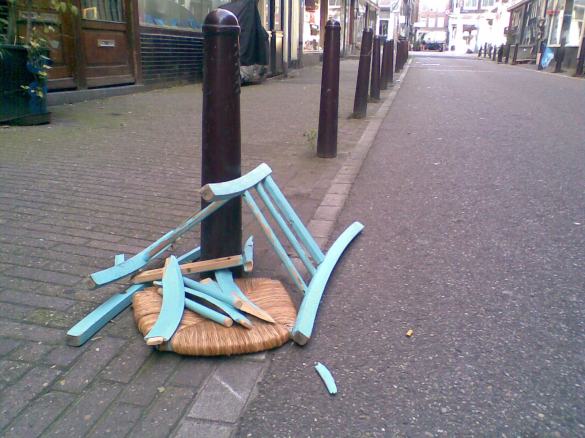 The movie industry is b

ecoming as lazy as the people put in charge of changing things in Washington.  Unless this IS the change we

’ve waited for.  God, I hope not.  They say people get the governments they deserve, does it also mean we get the entertainment we deserve?

The entertainment business these days is really about glory and not story.  Glory meaning the ultimate goal is attention, results and bottom line at pretty much any cost except a personal one.  How else to explain A list actors Jennifer Aniston, Kevin Spacey, Colin Farrell (okay, A – list) willingness to grab onto the R-rated gravy train with the quite taste free “Horrible Bosses.”

Don’t get me wrong, I’m in for a good raunchy romp fest where I can sit back and enjoy and not think too much.  But not thinking too much is not the same as not thinking at all.  Raunchy romping is not the same as witless characters doing stuff  impossible to believe even in the most stoned out story meeting.  But if the latter were possible in the year 2011 (because one wishes some of the ideas posited in these meetings actually came from people who were stoned, that would at least be an excuse) it’d have to be a little bit better than this.

I kind of liked “Bridesmaids” and parts made me laugh.  “Hangover II” was a thin retread of the first with only a few decent laughs.  “Horrible Bosses” lived up to half its title.  This is, of course, a

matter of opinion and perhaps you disagree.  But even those who enjoy the film (how could you????) admit it doesn’t make much sense.  Even in movie reality.  Here’s the obligation of the writer – create a dramatic/comedic situation and world grounded in certain rules and once that’s established go crazy within that world.  (That’s how the “South Park” guys do it). But don’t get lazy and just say, “well, it’s a comedy, we can do anything.” That shortchanges the filmmakers and the audience.  In this case, it must have been all those impromptu yuks on the set combined with numerous studio notes mixed in with various director and test marketing cuts that winnowed this film into incredulity.  Doesn’t matter it made $23,000,000 this weekend.  Or that it has 74% on Rotten Tomatoes.  It’s not something we should aspire to.  And we all can do better.

If you’re in the mood for great comedy watch:  “Tootsie,” “Monty Python’s Holy Grail,” “Some Like It Hot,” “His Girl Friday,” “Sullivan’s Travels,” “Forty Year Old Virgin,” “Duck Soup,” “Young Frankenstein” “What’s Up Doc?” “The Producers,” Philadelphia Story” “Groundhog’s Day,” or “This Is Spinal Tap.”  Or you have my blessing to rent or download or pay per view ANY film on AFI’s top 100 comedy list. http://www.funnycomedymovies.com/a_f_i__top_100_funniest_movies.htm

Or (better yet) – spend the time writing, directing , acting in or creating a new one on your own.  Anything but proclaiming to people how cool and funny “Horrible Bosses” is to your friends.  You, and we, and all of us (including the people who made it) can do better.  But only if we aspire to it.

5 thoughts on “Throwing The Chair”