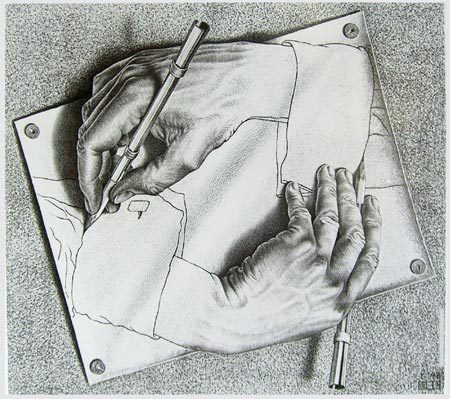 My favorite quote about writing is from Lawrence Kasdan and I read it in the eighties in an old issue of a now defunct magazine called American Film: “Being a writer is like having homework the rest of your life.”

Several years after I read the quote I actually found myself working for Lawrence Kasdan on a movie and I was very excited to relate this to him until I did and he gave me a blank stare and said he couldn’t remember saying it or never said it.  I fear our relationship went downhill from there.  But that’s another story and perhaps we both have mellowed.  I know I have.

Nevertheless, whoever said it or made it up captured my feelings at the time exactly and knowing many others (well, at least one fictional person) felt that way was hugely encouraging and partially responsible for me continuing to write screenplays and eventually becoming a screenwriter.  You take support and inspiration wherever you get it, I’ve learned, or as someone close to me once said, “go where the love is.”  I am now spending my life with that person but that’s the subject of still another story.

Today I also spend many days giving my writing students unconditional love not because I’m humoring them but because I’ve learned over the years that every idea has something in it, some kernel, to love if you look closely and unearth it.  The trick is not to dismiss it.  Leave that to studio executives or people who claim they didn’t say quotes that you need to believe (and maybe still do believe) that in their heart of hearts they really said.  Of course the latter doesn’t matter because I’m sure we’ve both moved on.  Well, at the very least, I’m sure he has.

But I’ve spent my entire adult life earning my keep as a writer in some form or another encouraged by the very fact that years ago someone showed me all writers are more alike than different and if I too felt this way I was not weird or untalented but perhaps just one of them.  (That and years of psychiatry too, helped).  Every so often that recognition gets reinforced – like this past week when I took a group of students to hear WGA award nominated screenwriters speak on a panel at the Writers Guild of America.

There were certainly many smart, funny, meandering, clever, slightly unsatisfying, honest and generally entertaining interesting remarks said by the writers of ”Social Network,” “The Fighter,”  “Please Give,”  “Black Swan,” “The Kids Are All Right” and “I Love You, Phillip Morris.” But the one that stayed with me was when moderator John August, a screenwriter himself (“Go,” “Big Fish”), asked about how they get through the writing process, specifically writer’s block.

Both Aaron Sorkin (“Social Network”) and Nicole Holofcener (“Please Give”) replied separately and identically:  “On days that it’s going well I feel great, and on days that it isn’t I feel pretty awful.”  The others who didn’t say that, pretty much nodded in agreement.

What?  You mean…..them too?  Holofcener who gets to write and direct very small, very personal movies with relative creative freedom, and Sorkin who shyly (yes, shyly) admitted he took a year to write “Social Network” and that David Fincher signed on the next day and filmed his first draft pretty much word for word?

A mental health professional might posit that self-doubt and self-flagellation like this is not the optimum way to live.  And it’s likely not every writer or creative person feels their value is attached to the work, or that those who do often have learned to balance whatever rocky waters they navigate on a given day with meaningful endeavors.  But that doesn’t matter because an audience full of screenwriters and aspiring writers nodded in reaction to those sentiments.

Speaking for all of us there (because why wouldn’t I at this point), we found it incredibly encouraging to know that we weren’t the only ones who alternately rewarded ourselves (probably with food, sex or something more dangerous – yes, we know Aaron Sorkin’s history) when it went well.  Or took those very things and turned them on ourselves and overindulged when things were going badly.  Or found new ways for self-persecution (too numerous to mention and, truthfully, why would I need to give anyone reading this many more creative ideas on how to do this thing we do)  Aaron Sorkin did publicly suggest one antidote for when it’s going badly – take a ride in your car.  I might try it, if only to see if it allows me to come up with a brilliant nine page opening scene of primarily dialogue for my next script.  Yes, I know it’s been done, but still…

Am I saying misery loves company?  Not exactly.  Or that writers and probably many other creative people are more neurotic than others since much of their art depends on self-examination in some form, wreaking unknowable psychic unravellings on their being?  God, I hope not.  I’m merely pointing out that support and community are out there in the most unlikely of places.  And that regardless of what you perceive as your level of success in the pecking order we are part of the same tribe and even the most anointed of us have down moments and suffer.  This can be strangely encouraging if you’re not where you want to be professionally yet seem oddly unfair if you’ve paid your dues and are now at the top of your profession.  Which I suppose has a certain justice in itself, especially to those of us not there.

Oh – postscript to my story.  Five years after my dreaded “homework” encounter I found myself in a car in downtown Los Angeles reading lines off-camera in a scene to Joe Mantegna in a screenplay I had written while at the same time a car carrying Kevin Kline drove by us on the way back to the set of “Grand Canyon,” a movie none other than Lawrence Kasdan had co-written and was directing.  While Joe and Kevin (yeah, that’s right – I mean – I was the writer now, after all) chatted and reminisced about life in New York, I looked around for Larry (Kasdan), partly in appreciation for saying (or not saying) something way back when that kept me going and partly to prove to him that I wasn’t a crazy sycophant who made up quotes from A-list writers about writing and that I had done MY homework.    But I looked around (A LOT) and he was nowhere to be found.  It didn’t matter because what he did or never said, in that moment I heard it, made me feel less alone and gave me the confidence to go on with my craft just a little longer.  Most of us need this.  Some are superhuman and don’t.  Whenever it happens take in.  And then – somewhere along the line – pass it on.